A Stealth Collapse In Broad Daylight

No, they never learn
It took four years, but eventually the degenerate gamblers at large who have the attention span of a coked up flea, finally forgot the pain of 2000 and 2008 and piled back into stocks one more time. Some people just never learn, so once again, they're ALL IN, double or dog food, while Wall Street makes its way out the back door.

This will be a stealth collapse in broad daylight, since the Idiocracy would never presume that printing money and borrowing to oblivion could end badly...

Momentum Pump and Dump
Chinese internet stocks, recent IPOs, Solar, Fuel Cell, Biotech and Momentum names are all getting hammered, even as the market treads water near all time highs. This market wants every last dime thrown at it before it rolls over into the abyss.

Add in the collapse of the "global macro" trades and this market is showing serious signs of fragmentation. Today marks a huge 8 distribution days on the Nasdaq and 5 on the S&P. The Dow is still below its high from December 31st. Today was a key reversal day in the Nasdaq 100 (gapped above yesterday's high and then closed below yesterday's low).

Biotech, the leading sector since 2009, got jack hammered today, but for me the real story are these retail brokerage stocks. It turns out that going back to 2007, they have a very good history for BEING THE LAST STOCKS TO PEAK. All that gambling money flows straight to their bottom line.

Schwab revisited its low of 2009 in late 2011 as home gamers sat out the rally. Then in early 2013 small investors decided it was finally time to revisit the same casino that robbed them the last two times. No surprise, Schwab and the other retail brokers went vertical in the past year: 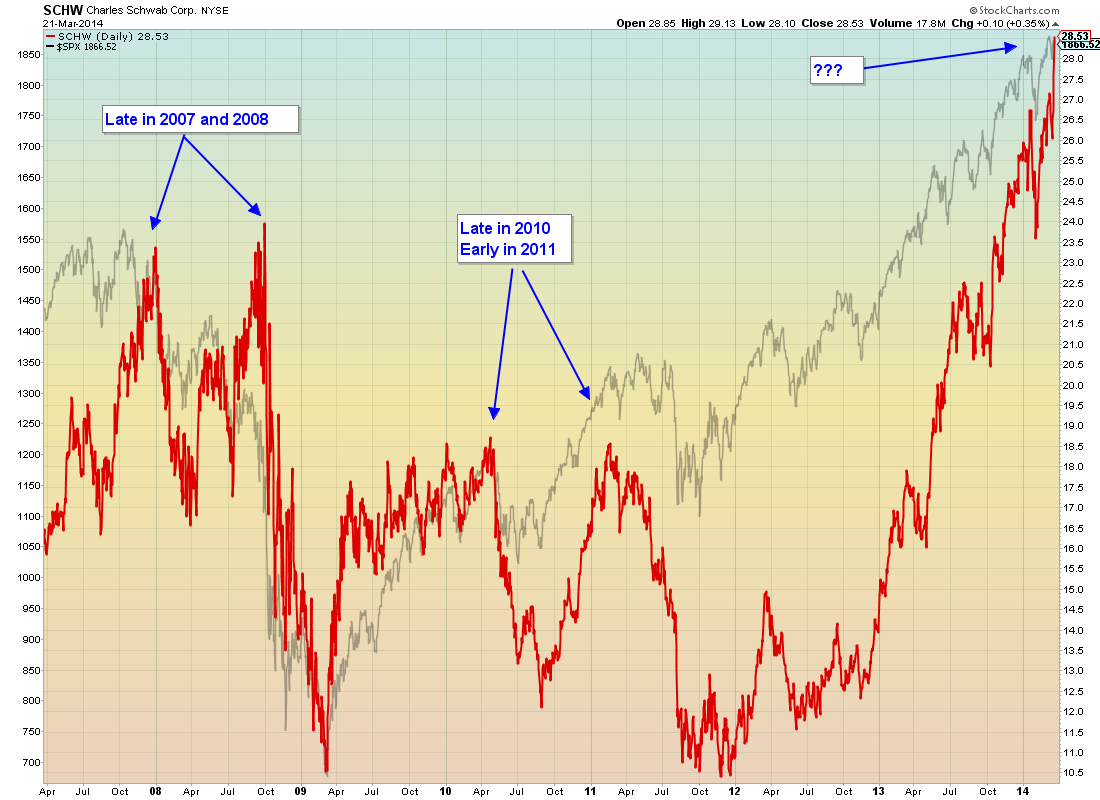 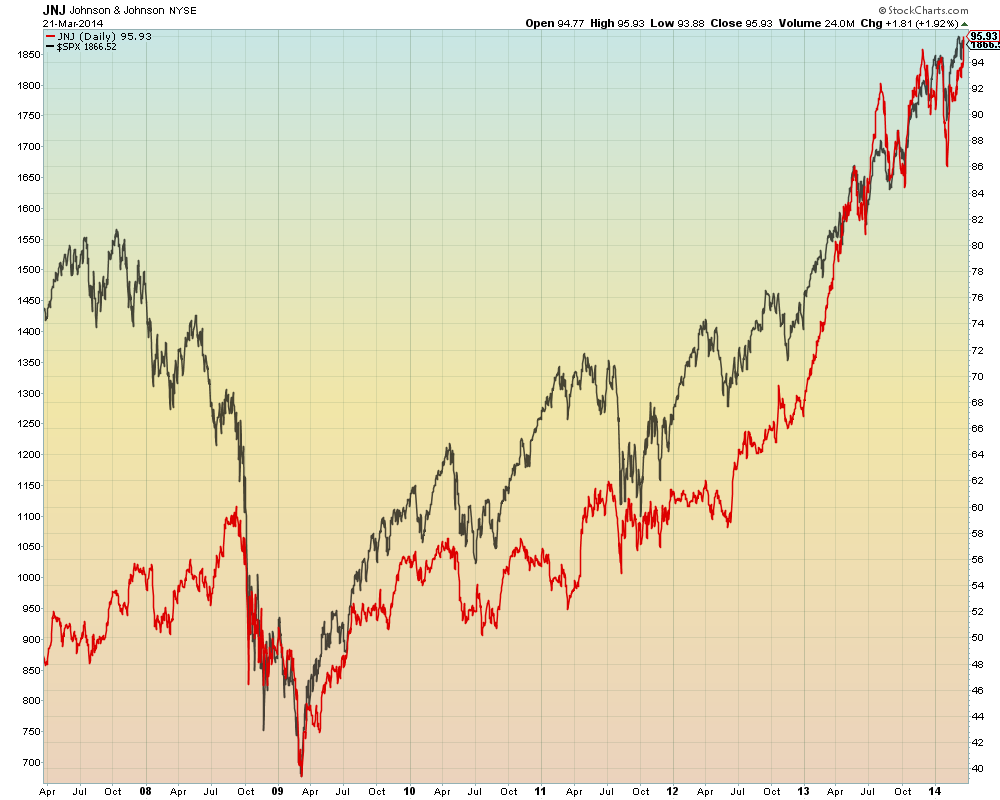 Biotech
Closed at the low of the day on 3x normal volume. 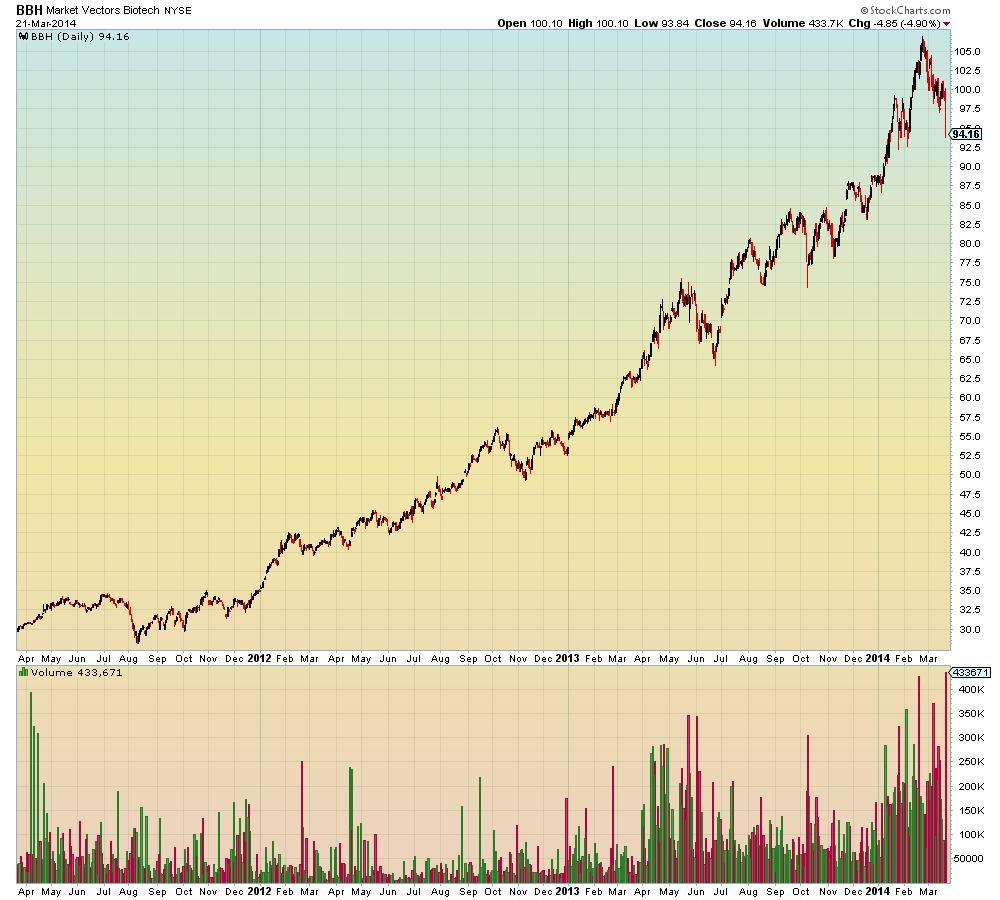 STFATH: Sell the Fucking All Time High
Wall Street is selling to their usual latecoming bagholders aka. small investors
TRIN 50 DMA - rising since early January of this year despite the market (S&P) being at an all time high... 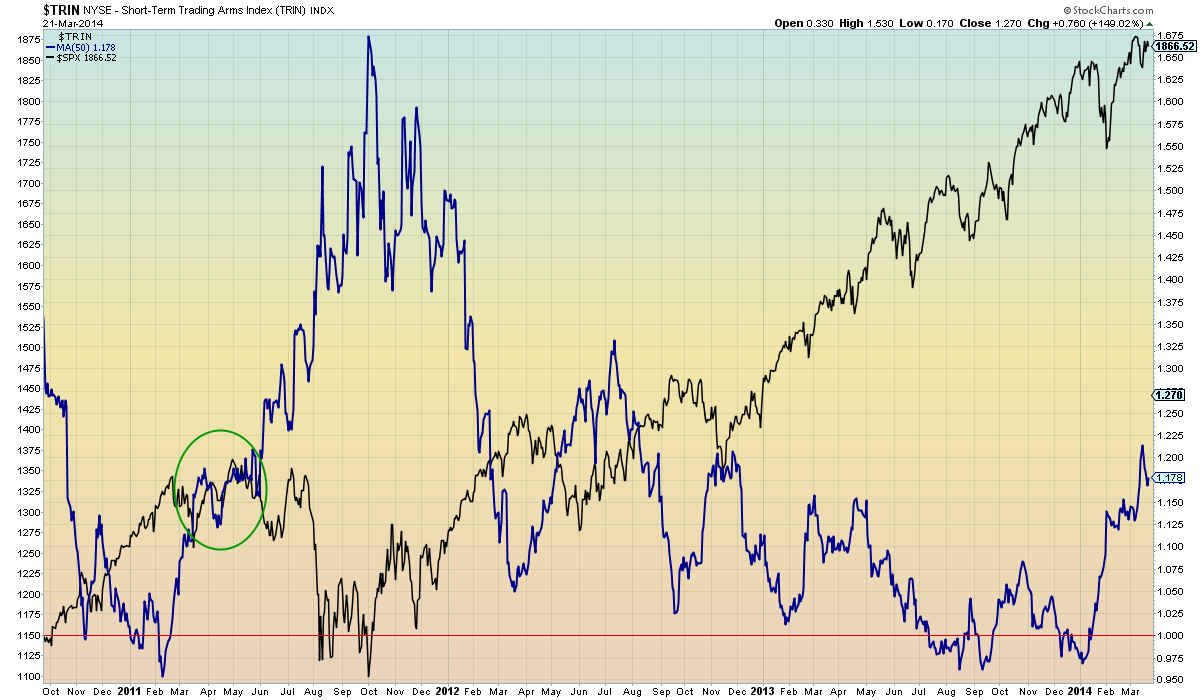 Vipshops (whatever the hell that means):
(or see SFUN, QIHU, BIDU, YY) 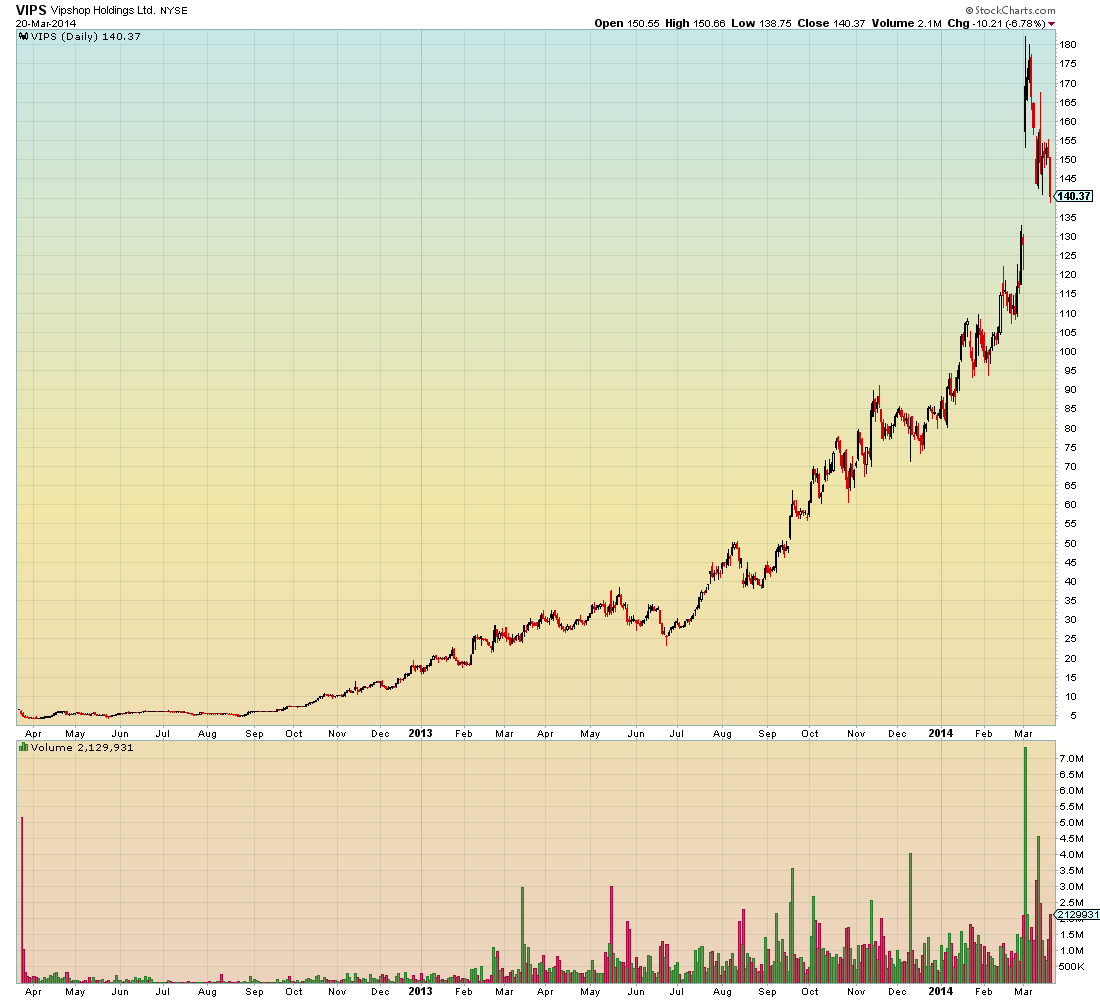 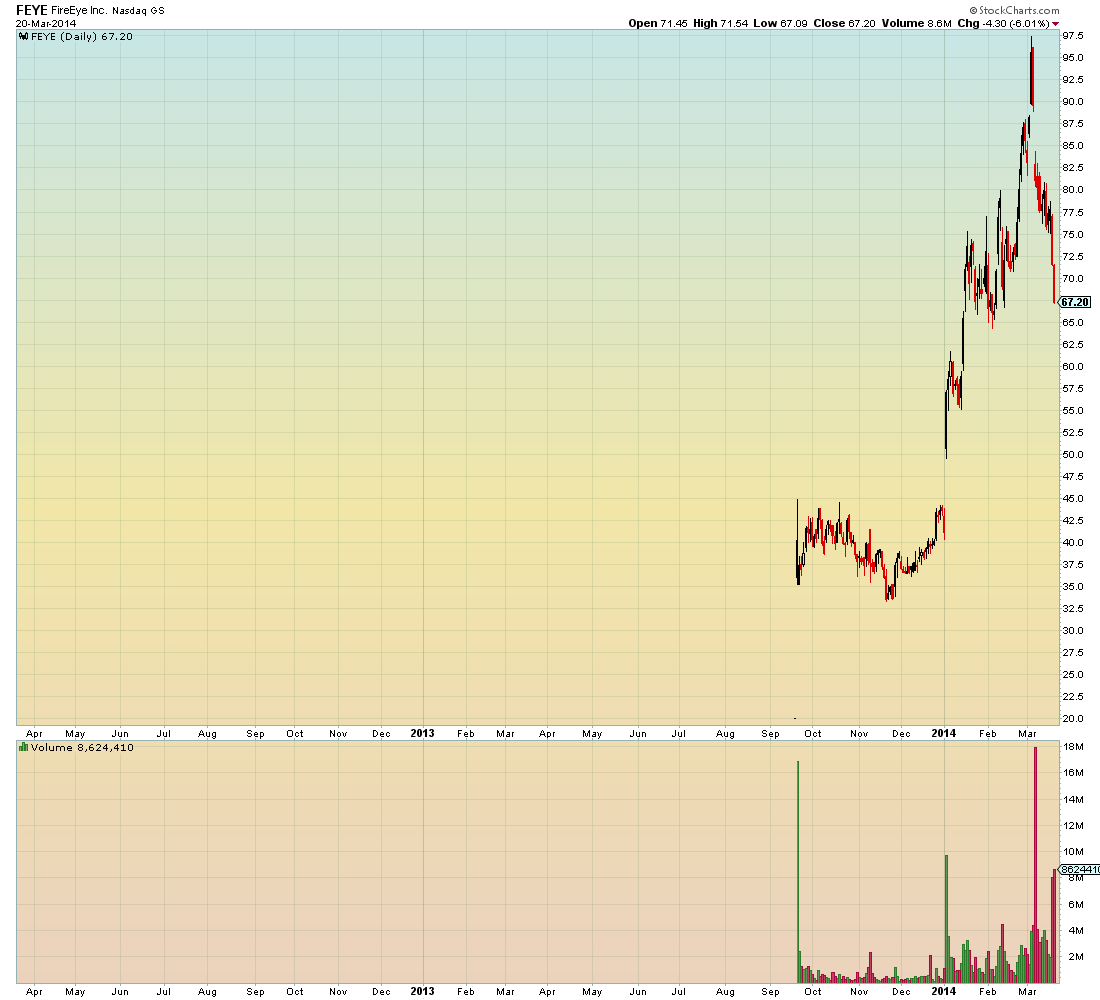 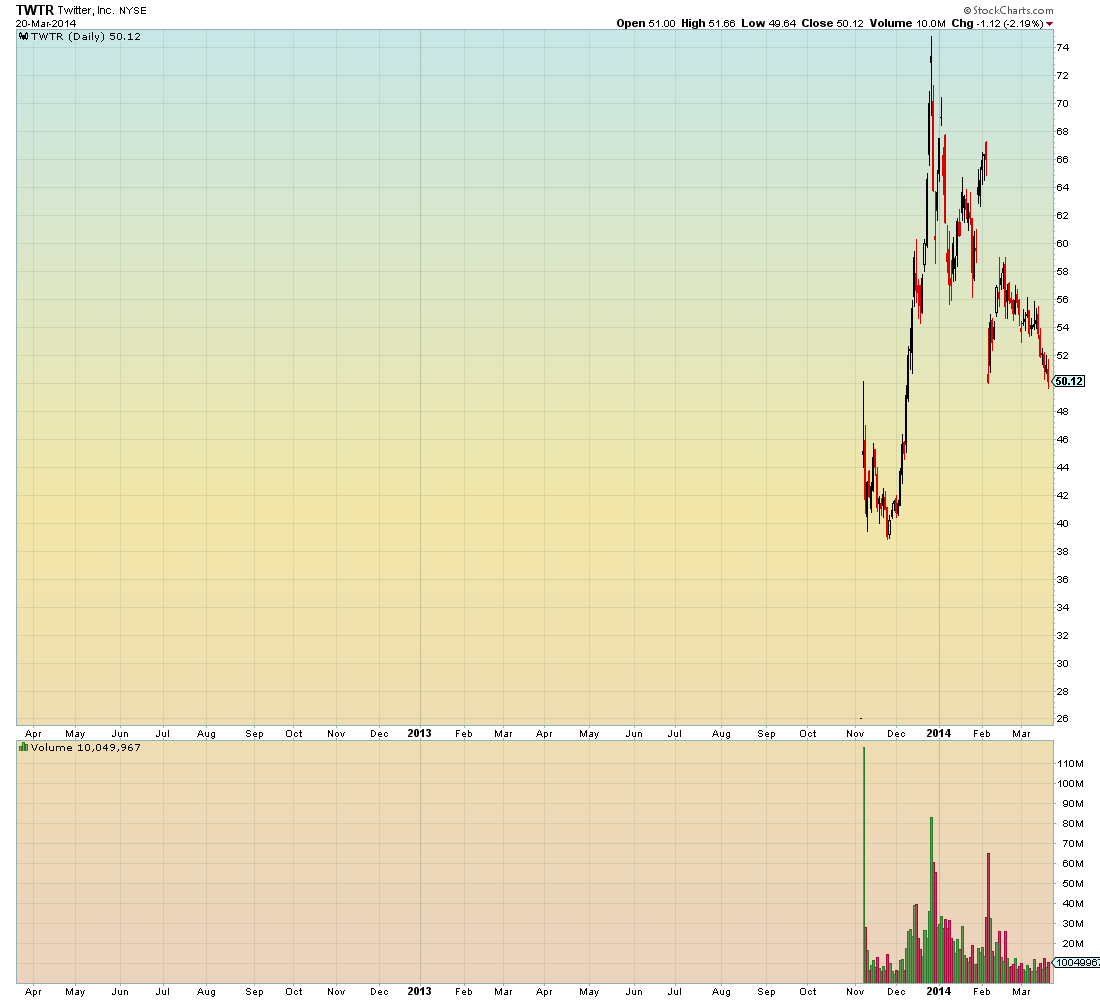 The New "Four Horsemen" of Tech have all rolled over:
Facebook, Netflix, Yelp, Tesla: 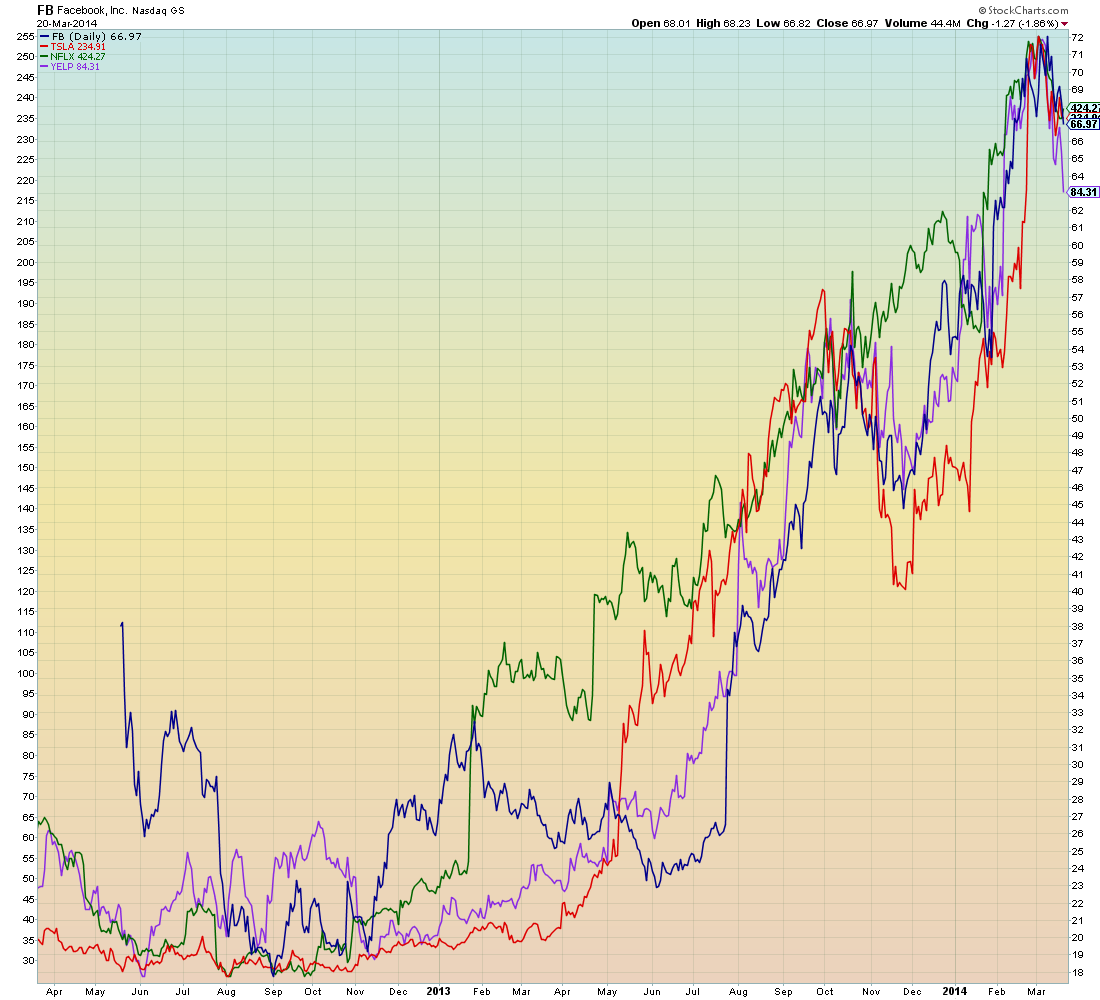 Fannie Mae
So much for buying up wholly owned government entities that are being phased out:
Hedge funds piling into this stock got taken to the woodshed 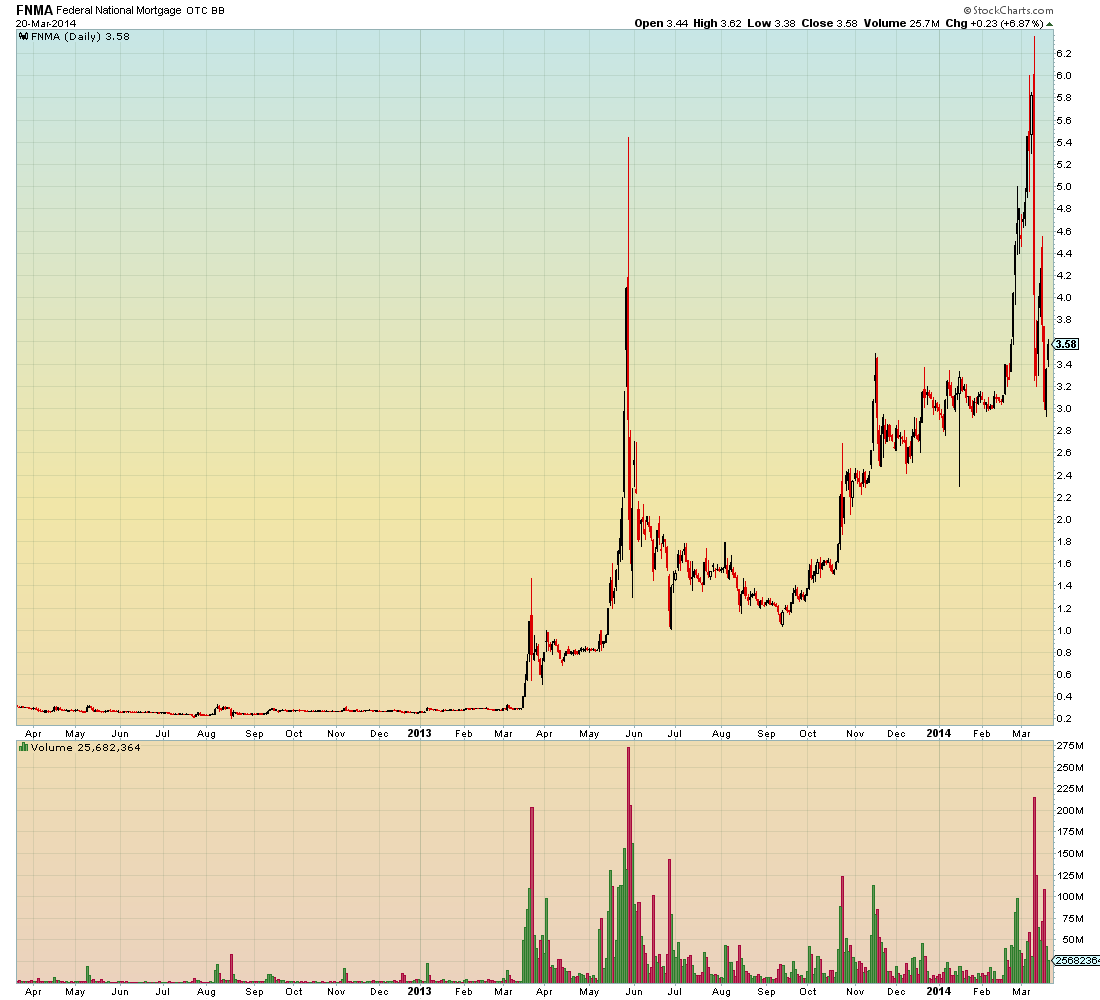 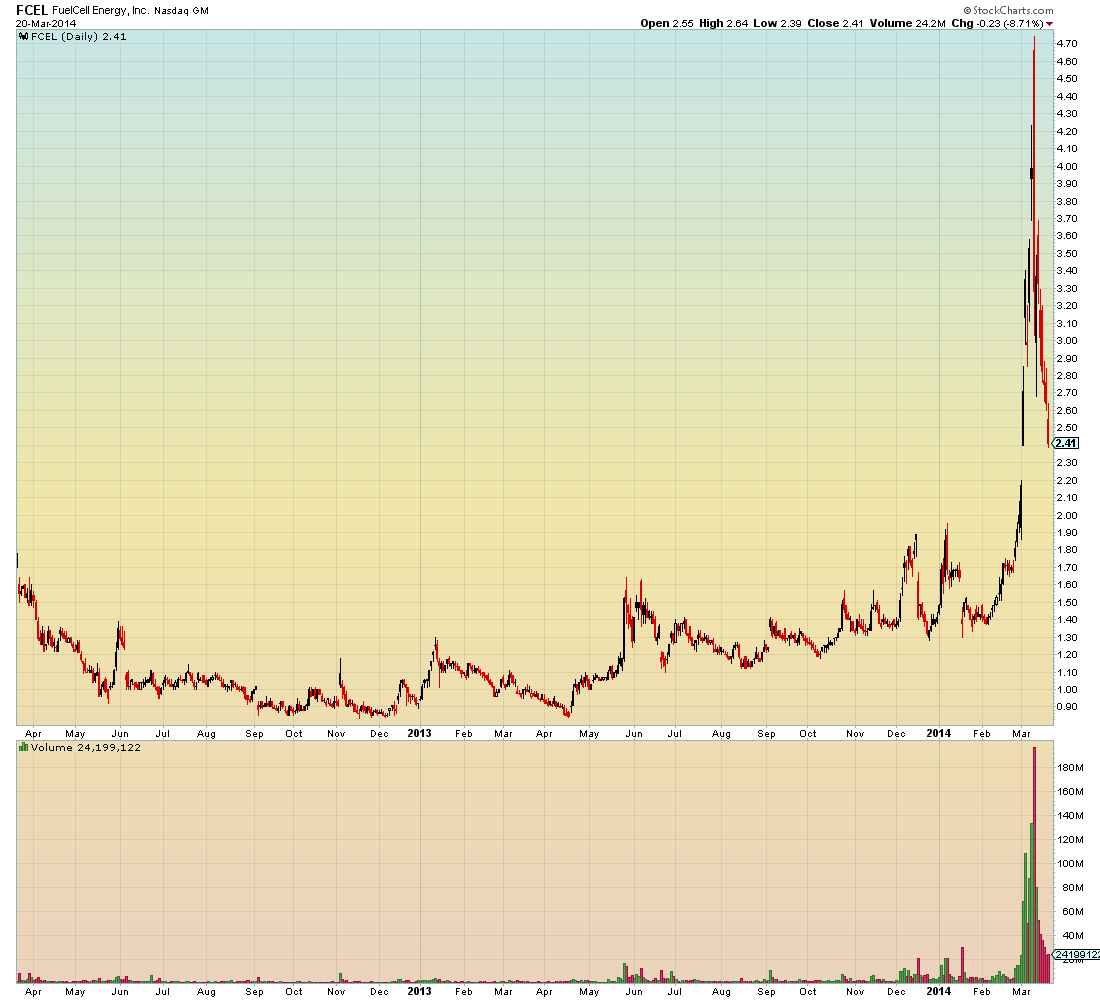 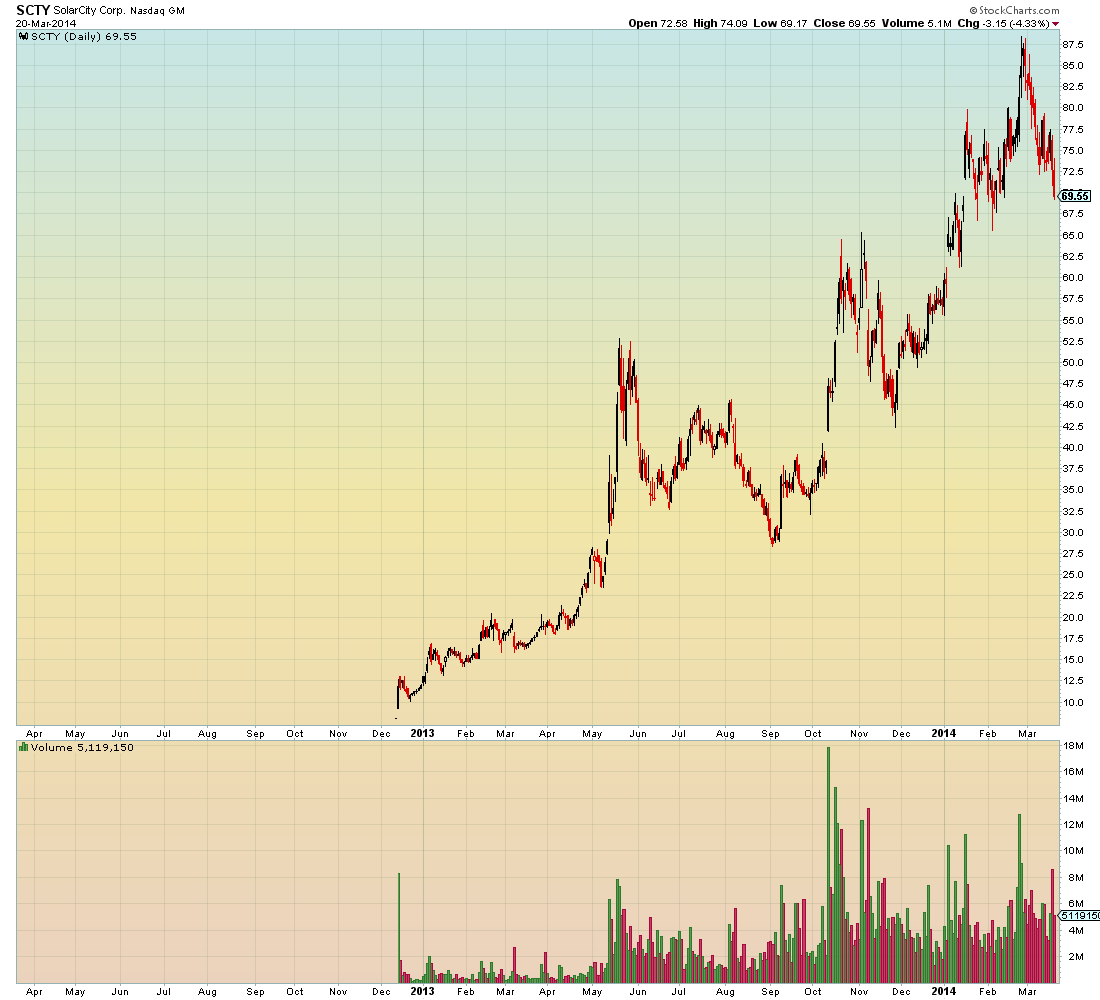 Home gamers can console themselves that someone makes money when they gamble their money away on junk stocks: 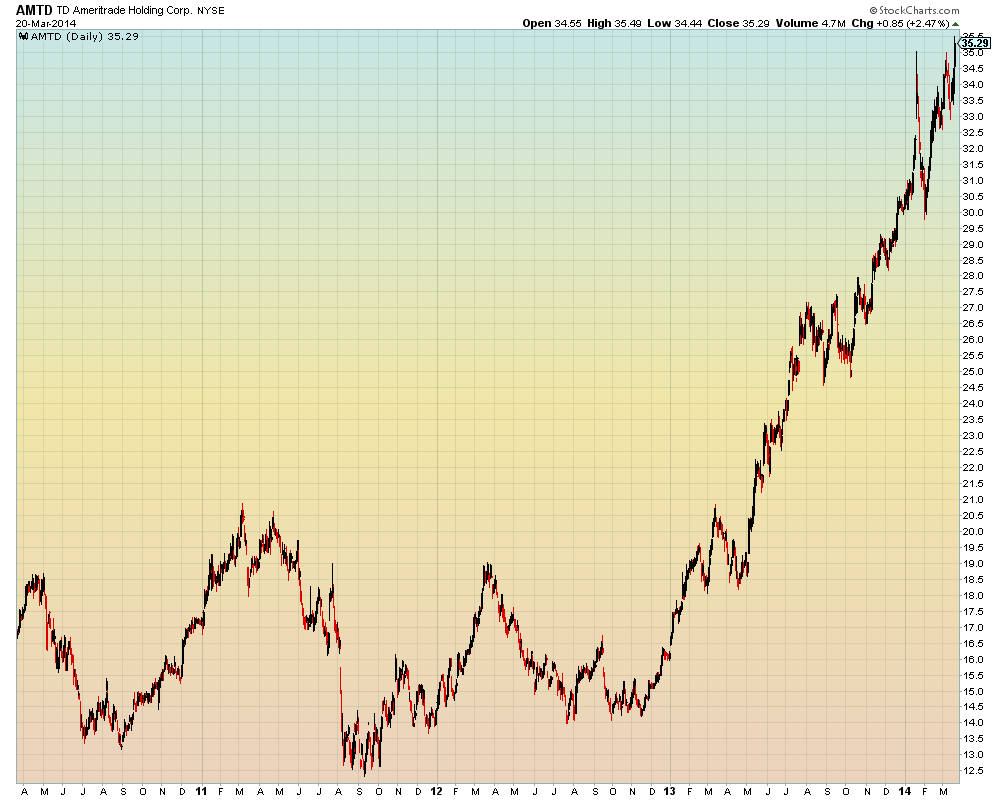 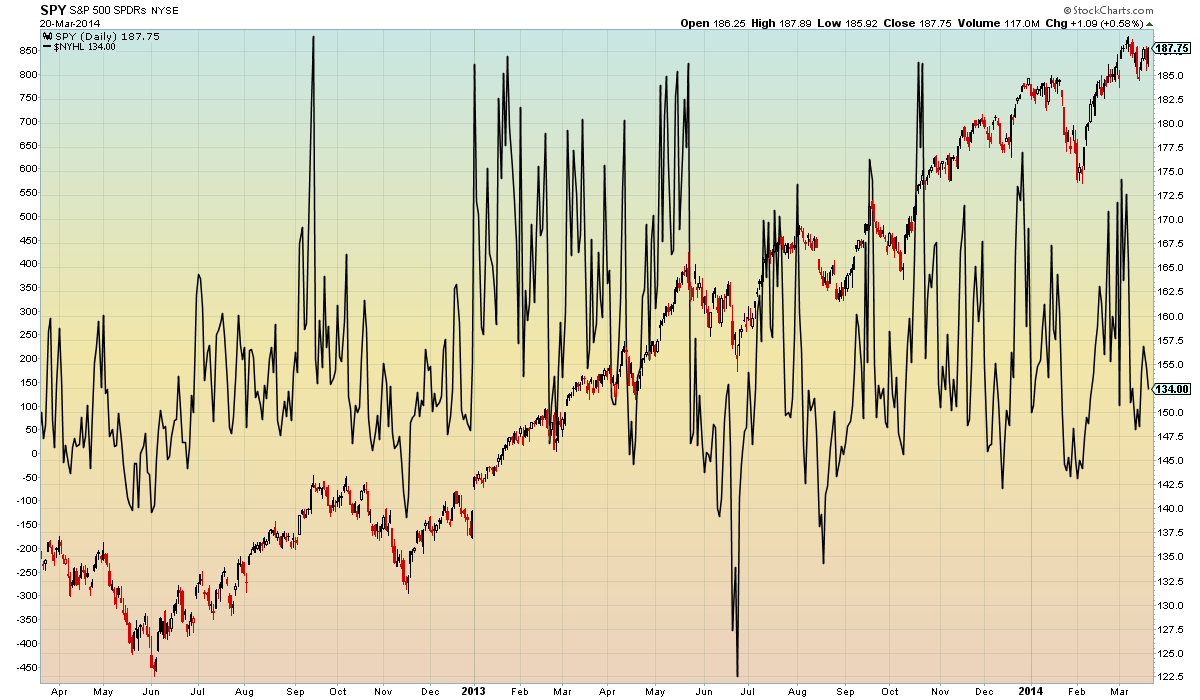