To fully gauge the Zeitgeist of the Idiocracy, just mash-up Wikipedia with South Park.  It's phony knowledge a mile wide and an inch deep, married with a crass cynicism that can't get out of it's own fucking way.

Daily we are pounded with contradicting messages, dulling the mind and senses.  Nihilism and subjectivity are the orders of the day.

Attenuation
The (very) temporary lessening in volatility.  I talked about it here.  Since then, the risk markets have ground higher, giving us this latent cluster fuck: 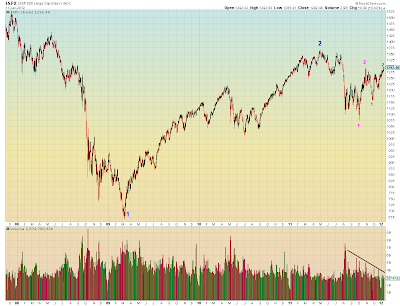 As you see, I moved the green "2" to the right.  Elliot Wave purists may disagree with this labelling, but the conclusion is the same - a low volume rally, wedging higher, with no underlying support.  Look at volume in the bottom pane - no conviction.  These are hedge funds that missed their year last year, and have to make up for it this year.  The general consensus is go "all in" now, because if you don't, you may lose your investors, whereas if if the market tanks, you have 11 months to make up the losses.  Like I said, a hedge fund is a giant call option - heads they win, tails you lose.

The low volume backs up the fact that the average (real) investor no longer trust the market, hence mutual fund outflows for multiple months in a row now.

Meanwhile, we have geopolitical risk at its highest level in history - across the globe, a tinderbox.  We have politicians who lie non-stop and a general public that desperately wants to be lied to, about the future, the economy, the environment - basically anything requiring effort to fix.  You see, the Baby Boomers are in their final approach to retirement, and they don't want anything, including reality, to delay their golden years.  Meanwhile, the latest economic theories have been duly reconfigured to advise us that printing money really is the best way to fix the economy.  I guess the Founding Fathers forgot to mention - "Fellow Americans, when in doubt, print more currency...the Constitution is hereby complete".  Sounds really stupid, until you realize that it's what the Fucktards of the day have been doing and are now looking to increase.

Yet for all that, Barry Ritholtz, tells all of us ("apocalyptic") bearish forecasters to stop blogging - we are too repetitive and more importantly it's a new bonus cycle i.e. time for Barry and his hedge fund brethren to Tebow another fat pay check.  Therefore, all of us realists doomers, need to settle down and get with the program.  Barry's claim to fame is riding around the Hampton's checking out all of the stores firsthand to see how the American economy is faring.  It's hard to see how this guy could be out of touch with reality.

Ok Barry, I will make this deal - I will stop blogging until my market prediction bears out and the Ponzi collapses like a cheap tent.  After which, I fully expect you and all of the other bloated 1% Comfort Seekers to run and hide away and shut the fuck up for good.  Whether you want to, or not...

2012 - The Year of Living Dangerously

I should start by saying Happy Holidays, but I know that most working Americans (i.e. the ones in retail) no longer get holidays.  They work before, during and after each holiday.  But as long as the top 1-10% can take time off without working, then I guess it all makes sense...???

Meanwhile, I am starting to think the Mayans got it right.  Coincidentally, I was at a Mayan temple on Wednesday last week, during a family cruise vacation (yes, I suppose I am in the 10%...).  According to our taxi driver, most of the indigenous Mayans believe the 2012 prophecy, so I have to evince sympathy for the typical five year old Mayan who is told this will be his/her last year to live.  In any event, it was certainly eerie to be in and around the temples a week after the beginning of Mayan 2012.

The cruise itself was a microcosm of the global economy that I so endearingly liken to a late stage Ponzi Scheme.  There were several thousand bloated Westerners having every whim attended to by legions of underpaid slaves from the Third World.  "Budi" our cabin attendant from Indonesia works 8 months on and 2 months off.  He gets zero time off during the 8 working months.  Each cruise is back to back, Saturday to Saturday and each day is a 12 hour shift.  Like me, Budi has 3 kids, except he sees his about once a year.  It's a no win situation - either to work like a slave and make a "decent" sum (by Indonesian standards) but only see his family once a year - or, live locally and subsist, at best.  What a great economic model we've evolved to at this modern age of 2012.  The robber barons of old had nothing on the current economic fiasco we call the global economy.

Meanwhile, I have never seen so many fat fucking lumbering elephants in my life as were on this cruise.  Fat kids, fat teenagers, fat 20-somethings and fat every other age.  Human toxic waste dumps.  One "fat back" even had a toxic waste symbol tattooed in the middle of his back, so I had to give him points for at least being honest.  Each of these mammoths would eat in one sitting what the average African villager would eat in 3 weeks - then wash it all down with gallons of alcohol.  If I could some way chart the obesity epidemic, the chart would be going parabolic.

Speaking of stocks, to no big surprise, Wall Street finished the year without major collapse, ensuring once again decent bonus pay packets for the banksters and speculators.  Bizarrely, the market (S&P 500) finished at exactly the same level as last year i.e. it was flat year over year.  And for those calling for my resignation for having been too bearish this past year (and the one before), you can forget about it.  The market is still at a level it first passed in 1999, so it's been 13 years to nowhere.   At this rate, I can just keep going on huffing and puffing, because at best the market just gyrates up and down going nowhere - and at worst it will eventually conform to my expectations and drill for China.  In other words, contrary to the copious optimists of the day, time is on my side, not on their side.

The Emperor Has No Clothes
I also admit that I never thought that the Fed and ECB would openly print money/monetize debt in broad daylight without the credit markets having a major conniption (i.e. sovereign interest rates have remained sanguine).  This is the ultimate case of the Emperor having no clothes and no one wanting to openly admit it.  As I have said many times before, everyone is in extend and pretend mode - politicians, banksters, investors, media, economists.   Those few who are not in extend/pretend mode, apparently can't do basic math.

Like all Ponzi schemes, this one will eventually collapse.  Will we be sitting here 5 years from now still printing money to propagate the illusion of an economy ?  It seems improbable.  Like all Ponzi schemes, this one has the same attributes, it's neither sustainable nor scalable.  It's dependent upon an insane transfer of wealth from developing (aka. poor) nations to the wealthier nations - which are now consuming 110% of their own GDP.  The scheme is dependent upon the illusion of future prosperity for the poor at the bottom of the pyramid who dream of one day attaining a better way of life.  But that illusion is already frayed, and is fraying more with each passing day.  We are in overtime.

4) Flight to U.S. dollars/U.S. Treasuries (invest at your own risk)

5) Global unrest/anarchy - no place to hide