Time Tripping
Let's time travel back 25 years to when the Idiocracy was still in its infancy.  In 1986, the year I graduated from High School, who would have predicted:

1) The U.S. deficit would reach over 10% of the U.S. economy WHILE the economy was deemed to be in "expansion"

Meanwhile, who would think we could find so many moron economists having the audacity to attest to an "expanding" economy while the U.S. was still borrowing 10% of said economy to maintain such illusion?

i.e. With a 2% growth rate, an honest man would have to say we are in an 8% recession saved only by the fact of massive Federal borrowing.

2) Who would predict Corporate profits would be at record highs, yet unemployment would be above 9% "officially" and much higher in reality?

In other words, all that money the Federal Government is borrowing is falling straight to the Corporate bottom line, bypassing the real economy and Middle Class entirely.

Yet, who gets stuck with the fucking tab for all that debt?  The Middle Class.

3) Who would predict the U.S. would be monetizing 2/3 of its unprecedented deficit and yet interest rates on 10 year Treasury bond would still be at only 3.5% and core inflation would be quiescent.

A decent car still costs about $15-$20k.  Prices of tv sets have collapsed.  Housing prices are in renewed decline.

I bought a brand new Honda CRX in 1988 and paid $13k (on the road).  I can go out right now and buy a new Honda Coupe starting at $15.5k!!!  Not exactly what I would call heavy duty inflation, thanks to 23 years of relentless outsourcing.

i.e. the burgeoning signs of deflation are all around us, but silver/gold speculators are so blinded by greed that all we hear about is inflation.  Who doesn't think this precious metals bubble isn't going to end badly, like the last dozen bubbles? i.e. when everyone finally figures out Ben Bernanke is just the fucking Wizard of Oz.

4) Who would predict the U.S. would be monetizing deficits, gold would be at an all time high, half the Middle East would be in revolutionary turmoil, the U.S. would STILL be fighting two multi-year wars in the region and yet oil while breaching $100, would be lower than it was 3 years earlier !!!

i.e. more nascent deflation.  When oil rises, it's not inflationary, it's deflationary, because it sucks money out of the U.S. economy.  The price of oil goes up, the price of everything else goes down.

5) Who would predict that despite all of the above, the stock market would be within a few % of a multi-year high and the "risk trade" would be on in full force?

- Well, given Wall Street's short-term oriented obsession with greed and Bernanke's QE2 feed bag still dangling in front of them, I guess we could have put even money on that one.

Half of Europe is teetering on imminent sovereign default.  All it would take is for one failed debt auction to trigger investor panic and default.  One default will fell the rest like dominoes: Portugal->Spain->Greece->Ireland->Italy->Hungary...etc.  Wall Street is oblivious.

Speaking of stock market lunacy, Dick Arms (creator of the Arms Index/Trin) put out a great report this week at TheStreet.com discussing how the current stock market conditions are very similar to those attending the Crash of 1987 and this past April's "Flash Crash"...except that current conditions are even more precarious...

The financial panic of 2008 was a trivial event compared to what is about to come.  That crisis should have been a wake up call to our dithering policy makers.  And yet, in the meantime not one policy of substance has been changed.  To the contrary, risks have only been amplified substantially, and shifted from the financial sector to the sovereign national level, putting the entire global economic system at risk.

This is dedicated to the late Ayn Rand and all of her godless, greed worshipping Neo Con acolytes.   History will not be kind, nor will the gathering mob...

Avarice and greed are gonna drive you over the endless sea
They will leave you drifting in the shallows
Drowning in the oceans of history
Travellin' the world, you're in search of no good
But I'm sure you'll build your Sodom like I knew you would
Using all the good people for your galley slaves
As your little boat struggles through the warning waves


Bottom line, the the boyz on Wall Street pulled off yet another successful bonus season, ass raping the American public.

The only question now is who will be the bagholder this time?  Many a pundit thinks this rally won't end until the small investor gets sucked in for the umpteenth time this decade just in time for Wall Street to offload its merchandise in one more pump and dump.
I wouldn't be so sure about that.  Except for a month here and a month there, outflows from stock mutual funds have been relatively steady since the March 2009 low.  Also, that's some serious wishful thinking to believe there is a always going to be a greater fool ready to show up and buy your overpriced stock.  For those playing the greater fool game, I would be careful to look in the mirror once in a while and ask if the greatest fool isn't looking you in the eye already.
Bernanke's latest Middle Class Shaft-o-Rama
Still, I acknowledge, owing to Bernanke - the greatest market manipulator in the history of the planet - the  relentless stock rally continues apace as all that fresh printed QE2 money finds its way into stocks, commodities, gold and silver, while totally bypassing the real economy.

QE2 was announced in late August at the aptly named "Jackson Hole" Fed Circle Jerk.  Ostensibly, the purpose of QE2 was to lower borrowing costs to allow households to further gorge themselves on debt and wrap the noose tighter around their necks.  Unfortunately, that has not been the case, since from that exact date, unacknowledged by Bernanke, borrowing costs (which are abitraged to Treasury interest rates) have grown inexorably higher since that date.  No surprise, the easily duped "The Economist" was along for the ride and just this week (January 1st-7th), "Proceed with caution" (page 11), tells us with straight face that the goal of QE2 was "buying bonds with newly created money in order to push down long-term interest rates and stimulate lending".  Ok, so much for the marketing literature, the chart below is the reality:  In red and green ("It's Christmas!") are Wall Street's goodies, i.e. the higher stock market.  In purple, is Main Street's lump of coal i.e. higher interest rates (.TYX) ) (aka. Long bond) 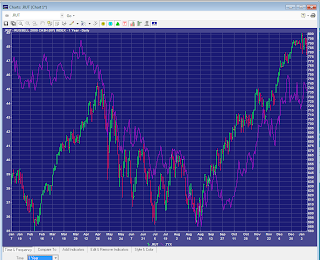 So, for anyone with half a fucking brain or an ounce of honesty, QE2 has done the exact opposite of what it advertised for several months now i.e. raised borrowing rates since the day of inception.  In fairness, QE "Quantitative Easing" is aptly named i.e. a new easing lubricant with which to shaft the Middle Class, in the name of  Bernanke, Wall Street's greatest Bukkake whore, ever.  I suggest "The Economist" starting printing in 4-ply, so I can wipe my ass with it and feel that I am getting something near par value.  The current glossy version isn't giving me enough "traction", if you know what I mean.
Suffice to say if us little guys don't show up soon to throw what little worth we have left at this market, things could get quite interesting.  You see, usually when the little guy shows up, the institutions take full advantage of increased buying volume to unload their positions - a process called distribution.  It's a relatively orderly process of parcelling out a steaming turd from the big hand to many smaller hands.  However, in the event the beleaguered small guy doesn't show up this time, well that would have big guys falling all over each other to get out the same door into a bidless market.  Suffice to say when piranhas start turning on each other, things can get a tad bloody.

When, not If
To some, those of us who are cautious at this juncture are like the Boy Who Cried Wolf - continually sounding the same alarm.  And yet, not withstanding the early warnings, when the wolf came it ate everyone.  Likewise, anyone owning stocks in this artificially inflated market, attending an eroding or at best bottom-dragging economy, is either delusional or trading on the :15 minute boundary.
Booyah Skidaddy !!! 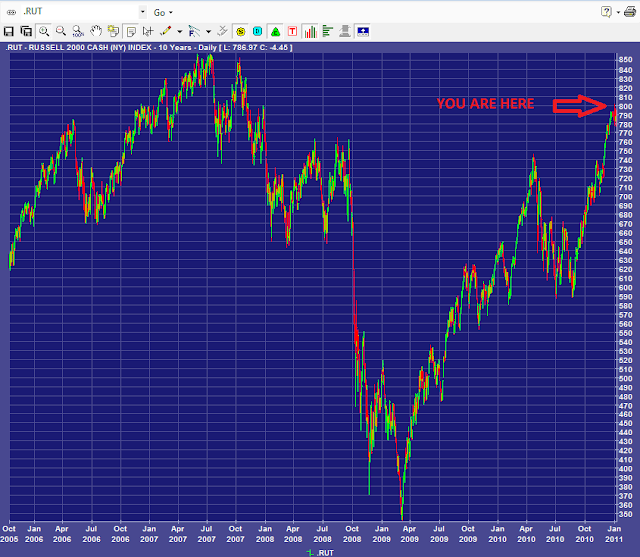