As I just posted, we are quickly reaching the endgame for Keynesian/Fiscal policy use and abuse in Spain.  Spain is the 12th largest economy in the world so its bailout options are considerably more limited than Greece's and the consequences of its 'unwinding' will be far more impactful.

Therefore, unless Spain can pull a rabbit out of the hat, it will likely be the first (of many) nations to reach what I call "The Krugman Moment"...

Risk markets scrambled today to figure out what is next for Spain.

The answer to that question is encoded in this article.

Spain is Too Big To Fail Save and Italy is Next In Line
As predicted last December (see "Why the Bazooka will Fail Regardless"), the ECB's LTRO ('bazooka') debt buying programs hastened default by killing the natural market for debt.  When LTRO 1 and 2 went into effect, Spanish banks gorged themselves on Spanish government debt to the tune of 300 billion Euros, thereby driving prices higher and temporarily improving their balance sheets.  It was supposed to be a three year no-brainer carry trade, but it was a self-propagated illusion.

Three years is the new five months:
As anyone with any knowledge of the markets could have predicted, the boost in debt prices was short-lived and ephemeral, because once the LTRO funds ran out, there was no marginal buyer of Spanish debt.  Meanwhile, the Spanish government continues to bring ever more debt to the market to sustain its burgeoning deficits.  Also as expected, foreign holders of Spanish debt "hit the bid", and dumped their bonds into the market, taking full advantage of the LTRO-inflated prices, and leaving the Spanish banks as the primary holder of Spanish government debt.  Fast forward, and ex-LTRO, debt prices are again spiraling downwards, as each tick lower in bond prices increases yields, translating into higher interest rates (in the primary market) for Spanish government debt.

FULL PONZI - The Reach Around
So...in order to to prop up its banks last week, specifically Bankia, the Spanish government attempted to use its few remaining billions to recapitalize the bank which has been in turn recapitalizing the government these past months.  I call this 'the reach around', because it reminds me of a man who shoves his head up his own ass.  And no surprise, debt markets were not amused at this stunt, sending bond prices lower and yields higher, today at 6.61%.  Apparently, the ECB was not amused either.

END GAME: Spanish Banks Now Dissolving and there is no marginal buyer of Spain's debt
On the asset side of Spain's bank balance sheets, the government debt which is marked to market declines every day, directly eroding bank equity.  Meanwhile, depositors are fleeing, thereby drawing down cash reserves.  Therefore Spanish banks will soon forced to sell off assets (aka. Government bonds) into an already fragile market to raise cash, further reducing their own equity.

Lastly, as the first article above indicated, there is no European financial stabilization program big enough to restructure Spain's debt load.  The new European Stabilization Mechanism (ESM) won't be approved until July at the earliest, and no one knows if that funding would be sufficient.  The LTRO programs were strictly for 'Extend and Pretend', and there will be no lasting effect other than to trash the ECB's own balance sheet.  Recall that in order to obtain the LTRO loans which were used to buy up Spanish government debt, the Spanish banks pledged 'other loans' as collateral i.e. junk mortgages pledged at 100% face value !  Thereby sticking broader Europe with the sinking value of those collapsing 'assets'.

Now repeat the above and replace the word Spain for Italy.

Harvard: leading the U.S. into the abyss

I had an epiphany last night that some would say is long overdue:

Harvard above all other 'schools of thought' is spawning sociopathic morons who are destroying the U.S. from every angle.

Just consider the most recent examples:

BTFD until the SHTF

Buy the Fucking Dip [BTFD] - that's Wall Street's mantra these days.  And why not, it's worked well for most of the past three years, save for a couple of notable market meltdowns.  As I have said before, Central Bank liquidity programs are payoffs for large institutions to look the other way to risk.  Therefore, not withstanding worsening fundamentals in Europe, here in the U.S., and in China, I have yet to find one stock analyst saying that stocks are an outright sell.  Small investors, on the other hand, having just gotten unfriended by the Facebook IPO, are selling big time...

It's time to stop living beyond our means on the backs of our children and grandchildren.
The long-term costs of our profligacy will be borne by them (and yes, us) for decades:

The world Ponzi is now in Sudden Death Overtime.

The widening gap between rich and poor will soon be shut...violently... 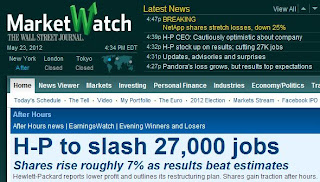 This is a depiction of Wall Street attempting to take down the massive facebook IPO.  Friday's debut was just the rumblings of indigestion:

Atlas is the mythical hero from Ayn Rand's magnum opus 'Atlas Shrugged'.  He is a metaphor for all of the 'great men' in the world who keep the planet running while the rest of us ne'er do wells do our best to stay out of the way or otherwise assist as best we can with their lofty travails.

Unfortunately, Atlas had to be let go, because it turns out he has been fucking the dog for oh say about the last many thousands of years.

"The man who wants everything, ends up with nothing"

The drama in Greece is getting to be very interesting.  It's a microcosm of the choices that EVERY major Western nation currently faces, whether our media propaganda machines will admit it or not.

Don't Worry, Be Happy
That's the public service message from the world's Central Banks to all of us in the general public, and especially to Wall Street.

When Bernanke embarked upon Quantitative Easing, three years ago in early 2009, he said at the time that the new policy (of printing money) would have unintended consequences.  In Donald Rumsfeld's terminology, "unknown unknowns".

Updated  5/1/2012:  Of all my posts over the past 5 years, this one gets the most consistent hits, no doubt because it becomes ever more relevant with each passing day.  So, I am dusting it off and moving it to the top of the list again, as time is running out on the Grand Ponzi...