The stock priced at $38, opened at $45 and closed right at $38.  I don't know the average price for the day, but it looks to be in around the $40 range.  So already, the average retail investor lost roughly 5% in the first day of the most over hyped IPO in world history.   And the only reason the stock didn't drop below $38 is because the Wall Street underwriting syndicate (Morgan Stanley et al.) stepped in to to support the stock all day.  Had the stock closed below the IPO price on the first day, it would have been a massive blow to the underwriters' reputation.  Closing right at the IPO price was bad enough.  Next week is a different story, because it will be every man for himself.  The other major issue is that the IPO opening was delayed by half an hour due to a Nasdaq trading glitch.  And when the stock finally started trading at 11:30am, there were more technical glitches throughout the day causing delayed trade confirmations.

As I mentioned, this was the most over-hyped IPO ever, with CNBS running a mini-series of tv segments for a week straight about the company.  Meanwhile, this IPO was supposed to be the big event that finally brought retail (small) investors back into the market and restored their faith in Wall Street.  But, in the event, the stock opened half-assed late, traded like shit all day, closed at its lows and stuck average investors with a one day loss of 5%.  Meanwhile, insiders saw their net worth print at a cool: $90 billion (when options are included).

Don't feel bad for the underwriters who had to come in and support the stock throughout the day, because they took home a collective cool $176 million in fees.

All in all, it was just the latest Wall Street shaft-o-rama.

Meanwhile, a few pundits are pointing to this FB IPO as the 'blow off' event in the latest Tech Craze - which is a thesis I have been pounding on for some time.  So I thought a pictorial update would be in order:

Apple:  The Chinese have been secretly plotting how to make a cheaper version of the iPhone, but then they just realized - hey, we already make the real iPhone !  Let's rebrand it 'youPhone' split the excess profit with the consumer and eat Apple's lunch.  This link shows the profit margin garnered by Apple v.s. its slave labour suppliers i.e. 30% v.s. 1.5%.  Foxconn is the company where several employees committed suicide because they hated their jobs so much.  So they fixed that problem - now you have to sign a no suicide agreement to work there.  Is this a great fucking system or what ? 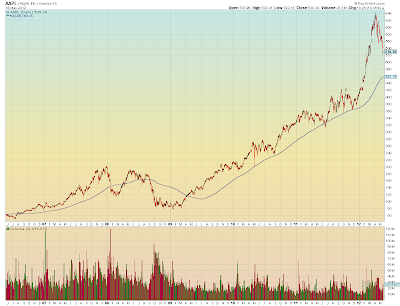 Spain: The next domino in the European debt crisis: 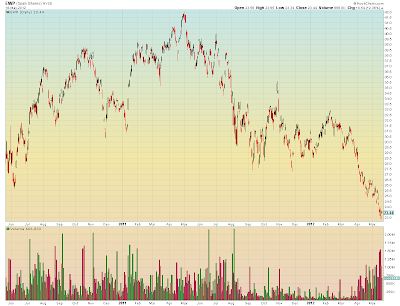 'Hi. I'm Fat and Happy;  What's Your Name...?":  Below is an updated chart showing the market surreptitiously declining to meet the 'VIX' options fear gauge which only today passed the relatively sanguine 25 mark.   The market's vertical decline has gone yet unnoticed by Wall Street traders who have their head up their ass munching on the latest monetary feed bag supplied by the Fed (aka. Operation Twist).  Focus on the current disposition, far right: 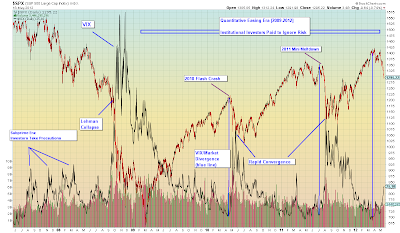 In other words, the long anticipated meltdown is already underway, and the only people who haven't noticed are the 1% greedbots on Wall Street still living in their fantasy bubble.  I have a feeling that they are going to be 'surprised', as usual.