Unfortunately, this is not a fucking game:
So, I dusted off my deflation/inflation economic decision flow diagram (below) which I haven't revisited for a while.  Not withstanding four years of 'Extend and Pretend', we find ourselves at a critical juncture, theoretically facing either impending deep deflation or hyperinflation.  As the model depicts, the only way we will get to hyperinflation is if debt monetization eventually morphs into printing and distribution of physical currency/hard cash/fat stacks - money real people can use.  So, I don't accept the hyperinflationist argument that mere debt monetization is going to get us to hyperinflation, because the sole goal of those programs (QE, LTRO etc.) is to inflate the risk markets and propagate 'Extend and Pretend' i.e. it's money given to lenders, not borrowers.  In other words, 2 QEs, 1 'Operation Twist' and 2 LTROs later, and no hyperinflation...?  Ok, whatever...Here you see the conflict of interest in the hyperinflation 'prediction' - as in 'they' will lose everything via hyperinflation, but 'we' will get rich in gold and silver.  Before that could happen, if inflation really did start to get out of control, interest rates would rise, thereby hastening default across all weak sovereign nations and households, obliterating the global economy.  No economy = no inflation, no problem.  And then the inevitable question:  Why can't 'Helicopter Ben' just print and distribute hard currency now?  The obvious answer, is because he doesn't work for us, he works for Wall Street and they don't want overall wage/price inflation, they want asset inflation via. QE/LTRO.  More importantly, cash transactions comprise a tiny portion of our economy, so when the borrowing/lending part of the economy goes away, so do homes, cars, refrigerators etc...

Alternatively, on the deflationary pathway (below) in blue, all it will take is the Minsky Moment (which can come any time), to collapse the house of cards once and for all.

As always, I predict deflation in the first instance, which as you see from the diagram will likely eventually morph into hyperinflation.  However, 'eventually' can take a long time, and in the meantime, you can't eat a gold bar... 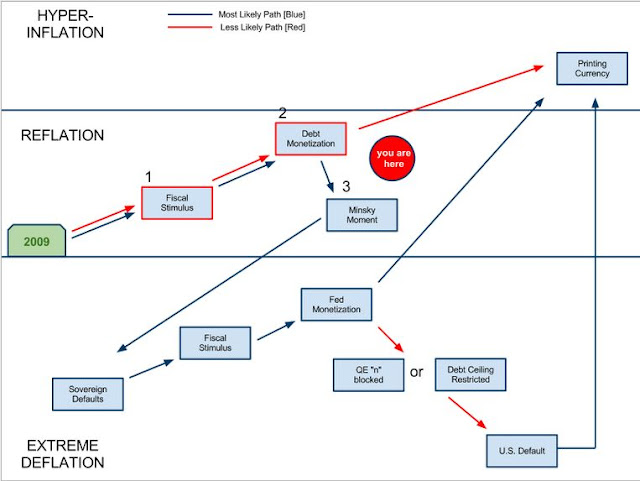