Back in October 2007, I came out with my first MAX BEARISH posting in which I stated that the market was making an imminent major multi-year top:

..."So what can the market do now that would inflict max pain on max people? Reverse hard down and never look back..."

Here again, I am going out on a limb and saying that I am once again Maximum Bearish and believe that we are at or very near the top of this counter-trend move. Last month, I allowed that there could be one more run higher, and there was, but there are several signs now that this move has been exhausted:

1) Near unanimous belief that the economy is improving - just this past Friday, the jobs report showed "only" 250,000 job losses and the market rallied on the "good news". Two years ago, a jobs report that bad would have crashed the market, but now it is taken as an unambiguous sign that recovery is on the way. In a perverse way, I actually agree with the dolts who see this as a good jobs report, because this is likely the best jobs report we see for years.

2) Near unanimous (misguided) belief in inflation. Today I read that the gurus at PIMCO, the world's largest bond manager, said yesterday on CNBC: "...the next Fed's move has to be tighter as a tautology" (Paul McCauley). And the commentator quoting Paul (Tom McGraff at RealMoney.com), rejoins with "Which is true. But when is the real question..." i.e. everyone expects the economy to improve, to bring with it obvious inflation, and for the Fed to have to tighten. This is why I have said that the reflation trade is very crowded to say the least i.e. long commodities, short dollar etc. As I have said (too) many times, we are in a deflationary collapse, there is no sign of inflation and there will be no inflation until the majority of outstanding debt has been wiped away through defaults and bankruptcies.

4) Overwhelmingly bullish sentiment towards the stock market, both the AAII and the DSI polls registered bullish readings last seen in October 2007

5) Speculative stocks ramping - AIG doubled in two days last week; Citigroup ramped 55%. There were a number of other small junk stocks blowing off last week as well - which has been a very reliable indicator in the past that the move is over...

6) The Shanghai market which is up almost 100% since last October now looks to have left the party. Remember that was the index that led the way down last year as well...

7) Low volatility index (.VIX). I said last year several times that the .VIX would explode, well it did from 10 in 2007 up to 95 last fall ! Now the .VIX is back in the mid-20s and it looks like it could be carving out a bottom here i.e. the market has been going higher for the past several weeks, but the Vix has not made a new low since early July, signaling that risk tolerance is waning...

8) Bob Prechter from EWI now believes the rally is either over or very near over. Bob has been early on many of his other predictions, but overall he is the master who said this deflationary collapse would happen and how it would happen in scientific detail. Bob also made a great (and timely) call at the March low this year, saying we would have this huge rally - fantastic call.

Finally, in my opinion, the most damning piece of evidence is the long-term view of the market itself, because as they say, "a picture is worth a thousand words" (see below - click to enlarge). Notice the steepness of the current rally since March - what better way to suck everyone in to think the worst is over. Notice how volume has systematically tapered off since the rally started (lower pane): 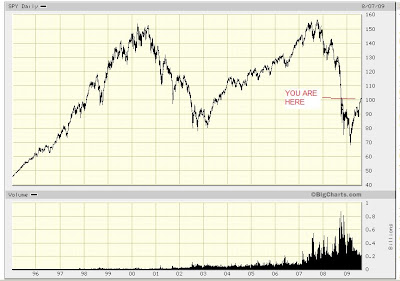