This is a brief update assuring that I have not changed my disposition towards the markets or economy in the past month.

Overall, nothing has changed. If I am correct (as I have been for the past 3 years), then what is directly in front of us is the largest economic decline in U.S. history. This collapse will cause widespread chaos and calamity, resulting in total loss of confidence in the government and Federal Reserve.

I know, the market has continued to rally since my last posts, however, that only makes me more certain that the next leg down is straight ahead of us and it will be brutal. Had the market stair stepped slowly upward or had it retested the March low a few times, as it did in 2002-2003, then I would be somewhat less confident about the timing of the collapse. However, ironically a market that bolts higher off of a low in a V-shaped rally without any significant pullback is actually tipping its hand. Its sinister goal is to suck as many people in as possible before reversing hard down and never looking back - what better way to do that than to run higher without hesitation.

Many commentators believe that this market is very similar to the 2002-2003 market that eventually lurched higher through 2007. Although the market charts are similar at this juncture, the underlying fundamentals of the economy are completely different. As is well documented, the 2003-2007 expansion was fuelled by massive consumer borrowing - primarily against home values. In addition, the unemployment rate back then never rose above 6.4% (currently at 9.8%). As I have stated many times, the belief that we can apply the same low interest rate policy in this recession to grow the economy is predicated on the idea that we can borrow our way to prosperity, indefinitely, with no consequences. Many otherwise intelligent people know this is not true, yet they still cling to the belief that the day of reckoning has once again been postponed.

Look at the updated chart (below). The market has continued its relentless ascent and is now back at the trendline originating from the October 2007 high two years ago. Notice, there was a brief pullback in the 90 vicinity (~S&P 900) which fullfills the Elliot Wave configuration for a typical a-b-c retracement of a larger move: "a" was the move from 66-90; "b" was the brief pullback; "c" is the rally from 90 until 110. According to EW analysis, an a-b-c move is a counter-trend move in a larger degree trend i.e. DOWN. In addition, volume has continued to taper off and investors are generally as complacent as they were at the highs two years ago (based on the low .VIX, low put/call ratios, and the Daily Sentiment Index). Likewise, many other markets (commodities, junk bonds, gold, emerging market currencies) are similarly bearishly configured. In my opinion, the catalyst for an explosion lower will likely come from a currency crisis originating either from the UK, which is totally insolvent, or Eastern Europe (Latvia, Hungary, Ukraine etc.). The stampede back to the much-hated U.S. dollar will cause major dislocations across the markets, as many hedge funds have been borrowing in dollars to buy emerging market financial assets...

As I said over a year ago, here, the market is tracing out a similar pattern as it did in 1929/1930 with a strong rebound that will convince everyone that the worst is over. I predicted most people would use 1987 as their false roadmap forward, so the only difference is they appear to be using 2003 instead... 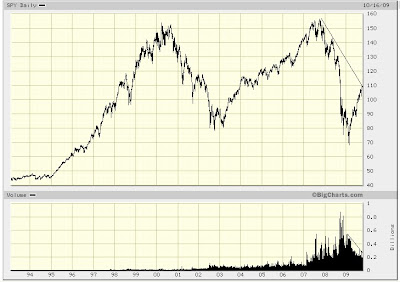