Looks like ALL of the markets (domestic stocks, global stocks, commodities) are getting set for a major leg down and here is why:

1) Since the January 22nd low, the stock market has been consolidating sideways in a very narrow pennant-shaped range. Usually a pennant formation is resolved in the direction of the trend, in this case down.

2) The Volatility index has declined since the January low, but it made a higher low and is beginning to rise again. Put sellers have been saved time and again these past four years, by V-Shaped recovery rallies, so they are highly conditioned to sell volatility into every decline. It's only a matter of time before this clueless cohort blow themselves up...

3) Oil, gold and commodities in general, appear to be in blowoff mode. Gold has risen 7 of the last 8 days and is now at $975/ounce. The charts of all commodities have gone parabolic...

4) Complaceny reigns: There appear to be few if any commentators looking for a major decline from here. The most bearish commentators are calling for a successful "retest" of the January lows.

5) The Euro has broken out to a major new high 1.52 vs. the dollar today, but similar to gold, the Euro move appears to be exhaustive, rather than breakaway. Likewise, the "dumb" money has been feeding at the Euro trough a little bit too long for this to be a lasting move...

6) Financial stocks started to break down again today on heavy volume. They led the way down in January, and most likely will lead the next leg down.

7) Treauries have caught a major reversal bid on very heavy volume in the past 3 days, indicating a flight to safety

So far the market has weathered this perfect storm of bad data, but it likely wouldn't take much more to see things come really unglued...
Posted by Mac10 at 5:08 PM

Since embarking on its rate cutting campaign last fall, the Fed has cut its interest rates several times in various increments bringing the Feds Fund rate from 5.25% down to 3%. Though seemingly Bernanke still has a few rounds left in the chamber, as I discussed earlier, if he cuts rates too low that would likely set-up a Liquidity trap scenario, negating the impact of the additional rate cuts.

It seems that my Liquidity Trap scenario has already been preempted by a transitory Stagflation scenario, which has rendered the Fed's latest round of rate cuts impotent. Since lowering rates twice in late January (.75% and .5%), long-term interest rates have been moving higher, not lower. The reason this is happening is due to the recent very high inflation readings - to wit, yesterday 's PPI print which was the highest since 1981.

These higher borrowing costs in combination with higher costs for food, energy, clothing, medicine, tuition...i.e. everything, is putting the squeeze on already highly leveraged consumers.

Yet, that hasn't stopped the man behind the curtain from continuing the rate cutting campaign, as just today Bernanke "signaled" to the markets that the Fed was preparing to cut rates again at its March meeting.

Why you ask, would the Fed continue to cut short-term rates and risk higher borrowing costs and living expenses for consumers? Easy - the Fed is cutting rates to steepen the yield curve which will allow banks to borrow short-term cheap and lend long-term i.e. the banks can make beaucoup $$$ via yield curve arbitrage. By doing so, the Fed is apparently more than willing to risk annihilating both the housing market and the general economy. It's a simple choice between Wall Street and Main Street and as always, Main Street loses.

As a post script, I would add, don't worry about this recent bout of stagflation. The deflationary spiral will soon enough obliterate commodities and any other bloated remnants of the great credit bubble.
Posted by Mac10 at 7:06 PM

One of the key goals of the Right Wing movement during the past decades is to implement a flat tax at the Federal level. In fact, Steve Forbes has made it his life's mission to champion the flat tax and he even made it the primary platform for his failed Presidential bids in 1996 and 2000. Here is a guy born on third base, has had everything served up for him his entire life and yet his life's mission is to make the richest 2% of the country richer...I digress...

Fortunately for Steve, I believe we will be having a version of the flat tax very soon in this country; however, it won't exactly be the kind of flat tax that Steve Forbes was envisioning.

Here is how the "modified" flat tax will come into being:

1) As I've indicated below, the U.S. government is now bankrupt and the economy is heading for depression. So raising revenues the old fashioned way through taxes, isn't going to be very popular or successful.

2) The U.S. will experience severe deflation as the banking system collapses and money supply (credit) dries up

3) In response to the downward deflationary spiral, the Federal Government will be forced to prop up the economy through a MASSIVE fiscal stimulus program, far beyond the Tennessee Valley project of the 1930s and orders of magnitude larger than the recently announced "economic stimulus plan".

5) With this massive increase to the money supply, the dollars already in circulation will be immediately diluted and therefore devalued.

The great news for Steve Forbes is that this new "tax" program will be "flat" to the extent that it affects everyone proportionally. As an example, if my $10,000 savings declined to say $9,000, then Steve Forbes' $1billion would be worth $900 million - we were both "taxed" by the same % amount.

And the best part is that under this new plan, you won't even have to fill out a tax return!!!

That means that the Government's entire new borrowings this year ($400B) will be allocated just to pay the INTEREST on past borrowings, without a dime left over for anything else. Putting this in perspective, if the Government was me or you or a Corporation, it would be legally bankrupt.

This by all definitions is the very meaning of PONZI borrowing. Investors purchasing bonds from the Federal Government will be paying themselves back, with yet still more bonds!

Roadmap for the near future (DOW circa 1929) 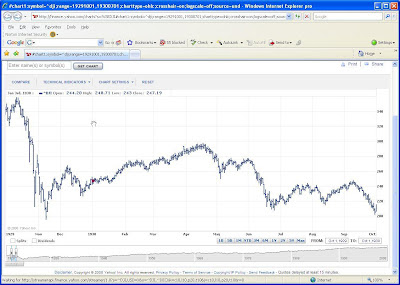 Q: If the Volatility Index (VIX) above was a stock, would you buy it?

However, it's not a stock, it's an index that measures investors' anxiety levels as imputed from option prices. Therefore, a rising VIX indicates rising anxiety levels.

If we have a breakout above that triple top, Wall Street will shit a brick.

NEXT UP: LIQUIDITY TRAP

It's February 8th, 2008 and the Fed has now cut interest rates at the most aggressive pace in decades. In January alone, the Fed cut 1.25% from the Fed Funds Rate. As the FFR now stands at 3%, the Federal Reserve is running out of bullets. To wit, the stock market (S&P 500) is lower than it was when the Fed first started lowering rates, and spreads between Treasury ("risk free") bonds and junk bonds are at their widest point in years, reflecting growing risk premiums.

This suggests the inevitability of a "Liquidity Trap". A liquidity trap is a situation where interest rates are lowered to such a point (i.e. 0-1%) that the Fed's standard tools for stimulating the economy no longer work. At very low interest rates, lenders are unwilling to lend, because it's not worth taking risk to receive such low returns. Would you put your money in a bank a) if you only received .5% interest and b) you were worried that you might never see your money again? Neither would I. So, those lucky few who actually have money, end up stashing it under their mattress or caching it in the backyard.

That's when the Government turns to "printing money", as in handing out "Stimulus checks", which is what Congress voted to do this week.

As this decline unfolds, I predict many more rounds of stimulus checks, however, each round will be less and less "stimulating". As I've indicated in my earlier post, the forces of deflation will exert a far greater contractionary force than can be offset by a few rounds of charity checks, especially when foreigners catch on and start pulling their money out of the U.S.

The fact that there are so few economists (any?) who see a liquidity trap on the horizon, is one of the most troubling aspects of this whole debacle.
Posted by Mac10 at 7:20 PM

What fiasco would be complete without a listing of the key stooges responsible for this monumental debacle?

In order of responsibility:

1) The Fortune 100 Multinationals
- For engaging in industrial arbitrage (moving jobs and entire INDUSTRIES from the U.S. to overseas)
- For playing one country off against another and making damn sure there will never be a global labour or environmental standard

6) American electorate
- For electing Ronald Reagan and George Bush (Jr.), two unqualified morons. No country can survive that magnitude of incompetence over such a short span of time

7) The Baby Boomer Generation
- For being the largest group of assembled hedonists since ancient Rome
- For mixing, pouring and handing out the "Kool Aid" that made this fiasco possible

8) The Economics "Profession"
- For looking the other way as every basic rule of Economics is being broken
- For ignoring history and believing that "It's different this time"
- For having the credentials, but lacking the insight or comprehension to go with them

10) The Media and the CNBC financial cheerleaders
- To the Cramer's and Kudlow's for cynically pretending to care about your country, yet not giving a damn for 95% of Americans
- For spinning every story into a bullish tale for ease of public consumption

1) I did not directly blame Bush or Reagan, as I don't believe either of those simpletons is/was capable of understanding the impact of their policies. They were just figure heads for the Special Interest groups who elected them

2) I did not directly blame Ben Bernanke, as he inherited this unholy mess; however, to the extent that he belongs to the broader community of economists, he shares blame for "not getting it"
Posted by Mac10 at 6:28 AM