Because, hard to believe, you can't borrow your way to prosperity. This will be viewed as the largest theft in human history, without any comparison...

The only reason this gambit was believed at all is because we live in an Idiocracy of dumbed down corporate automatons who question nothing. More attuned to the Kardashians than they are to reality. In the event, this con job somehow fooled the IMF, the World Bank, the majority economics establishment, global central banks, Wall Street, the lamestream media, and of course the sheeple at large. No prior generation would have believed that borrowing 4% of GDP to claim 4% GDP growth was in any way an honest policy, much less a functioning idea.

To recap, going back one year, Trump's mega tax cut flowed into the coffers of the ultra-wealthy and large corporations. From there it devolved into human history's largest insider cash out scheme via $1 trillion in stock buybacks. Meanwhile, the Treasury bond market imploded sending yields sky-rocketing which raised borrowing costs for everyone in the U.S. and the rest of the world. In a nutshell, a borrowed tax cut for the rich, and higher interest rates for everyone else.

No surprise, the business community bought into Herbert Hoover's deregulation of corruption with both hands. Marking the largest expansion in corporate debt in U.S. history to new record highs on both an absolute and relative (to GDP) basis. In the event, they turned stock holders into call option holders, with an expiration date set for the end of the cycle. 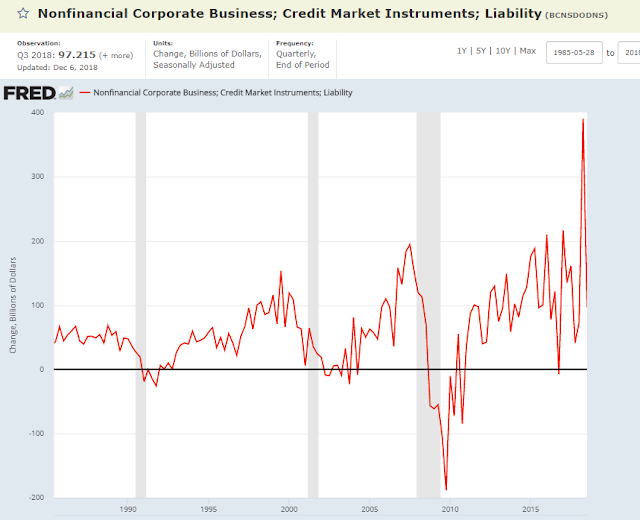 It gets worse - every bubble that was inflated in the past two years collapsed during 2018 due to interest rate "reflation":  Cryptocurrencies, Chinese Tech stocks, Biotechs, revenueless IPOs, FANG internet stocks, semiconductors, crude oil, lumber, and of course global real estate.

Here we see (smart) money flowing back to money market funds since the tax cut, as the yield on money markets exceeds the yield on the S&P 500, for the first time in a decade. Whereas stock investors should have seen the Fed rate hikes as their last chance to reduce risk exposure. Instead the dumb money increased their exposure over the course of 2018, while insiders cashed out. 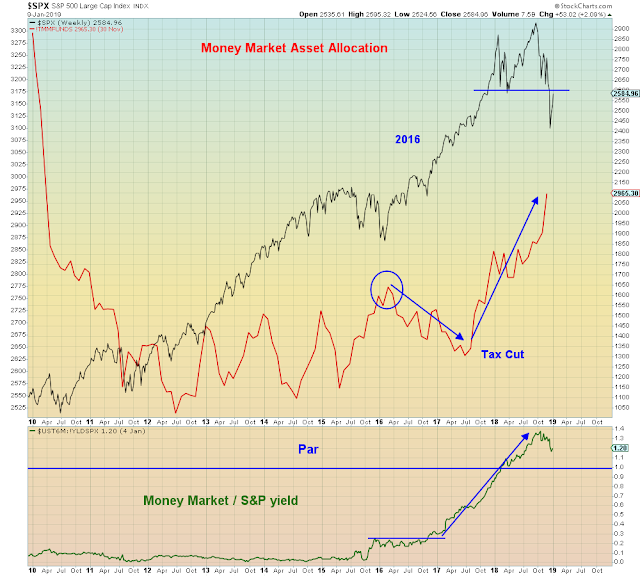 Global central banks took the mega fiscal stimulus as cover to finally begin normalizing policy after over a decade of post-2008 accommodation. Which means that the bond market was getting double shellacked by higher Treasury issuance AND by Fed balance sheet rolloff.

The trade war hit the U.S. far harder than it hit China - particularly agriculture, autos, and industrials. Throughout this time, China's trade deficit with the U.S. has continued to widen inexorably to record highs. Which is why the narrative that Trump's trade war is bringing down China is a total fabrication. Much of the consumption side of the tax cut flowed to Chinese exports to the U.S. The real reason China is buckling is due to the higher cost of capital and the strong dollar. Both consequences of the tax cut which raised the global cost of capital/interest rates.

The inevitable consequence of 2008's bailouts, Ponzi borrowing, and money printing chicanery is that the economics establishment has entirely lost its intellectual mooring. Ideas that for most of U.S. history would have been deemed asinine and unthinkable are now accepted without question. Which is why every fundamental tenet of basic economics is now being broken without even the slightest question. 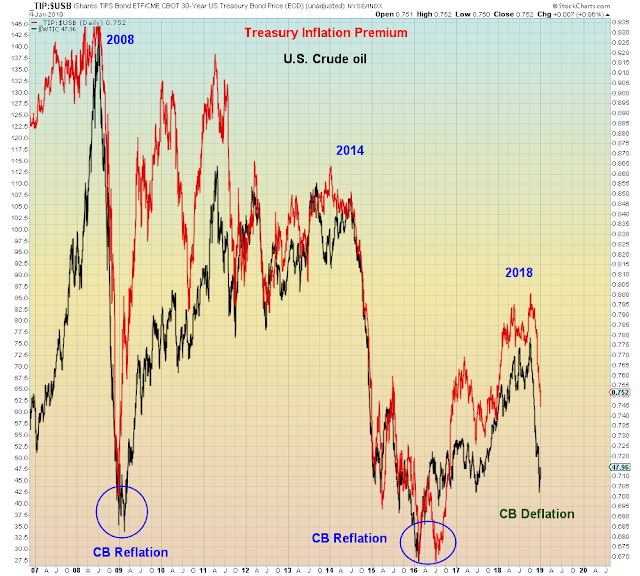