Black Christmas: Shop 'til They Drop

It's the week before Christmas, hence bankrupt Western consumers, leveraged to 350% of GDP, are once again shopping themselves into financial oblivion in order to celebrate the birth of a man who preached against greed and poverty. These shrink-wrapped consumption drones never once stop to question why it is that Third World factory slaves will never enjoy a First World standard of living. Meanwhile, the debt time bomb continues to tick away silently in the background, ever closer to its moment of hindenburg-like implosion. Belief in the status quo is merely a bet that Central Banks can continue to provide liquidity support to lenders while insolvent borrowers fall further and further behind in their debts...

This week was Bernanke's last meeting as Fed Chairman. His overriding mandate from the ultra-wealthy geriatrics who own and run the world economy was to maintain the status quo at any cost. So that's exactly what he did, he maintained the status quo at all cost:

A 0% Wall Street Bailout with no accountability
Financing for $8 trillion in U.S. deficits i.e. a doubling in U.S. debt over 8 years
Financing for bankrupt global sovereigns (via. carry trades)
A blind eye to mass outsourcing (aka. estate sale)
The largest wealth gap in U.S. History
The lowest labor participation rate since women joined the workforce (40 years)
Record high corporate profits / record low wages (% of GDP)
Funded 8 years for politicians to do nothing to fix the real economy
Flooded Wall Street with $3 trillion of free money assuring a repeat of 2008
Sponsored a third consecutive Fed-sponsored asset bubble, doomed to collapse
And the ultimate parting gift - the complete and total mispricing of risk

End Result: Risk is Now 10x Higher Than 2008, None of Which is Priced In
2008 was about banking risk, whereas today is about sovereign nation solvency risk i.e. orders of magnitude more deadly. Meanwhile, Central bank liquidity programs have artificially suppressed market volatility making hedging impossible and giving the appearance of low risk. Whereas the market descended and the VIX rose throughout 2007/2008 to reflect the pricing-in of risk, today's risks are totally ignored by markets. All of which means that asset managers are totally under-hedged and will all reach for protection at the same time, causing volatility to explode out of reach. That leaves only one alternative to reduce risk i.e. selling. And when market volume picks up, the HFT bots will step aside as they did in 2010 during the Flash Crash, leaving a one-sided market. The jaws of reality will converge violently heading in opposite directions: 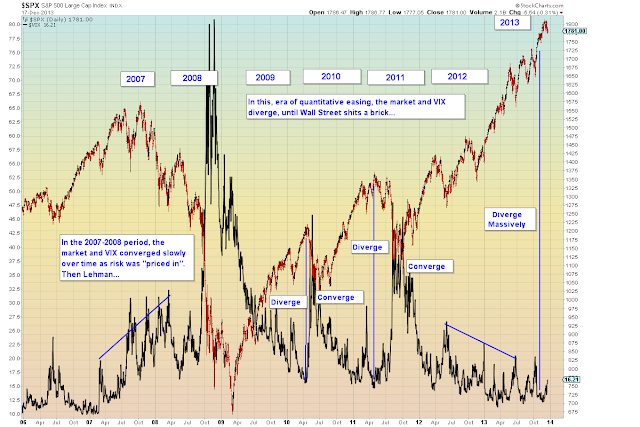 BitCoin is crashing for the third time in three years. Dead money. 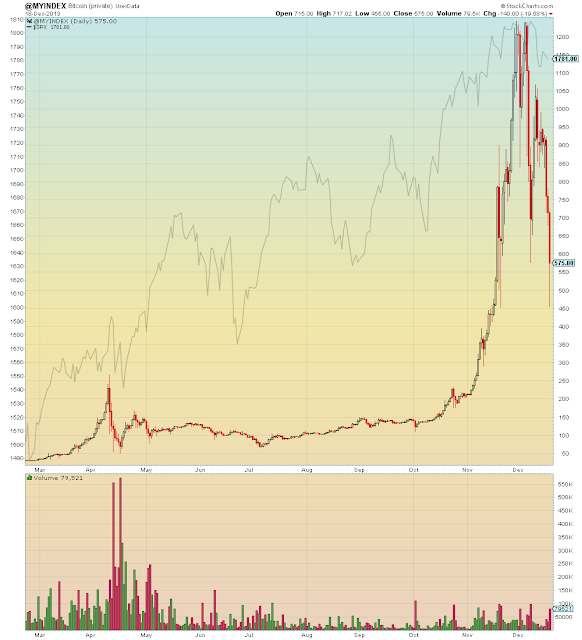 VJET
Top Performing IPO of 2013 - No, they never learn 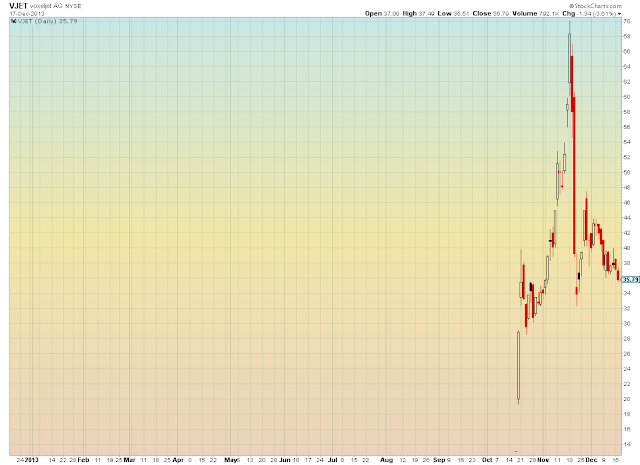 Via ZH, a 6th Hindenburg Omen in this latest cluster
The last set of cluster(s) this year didn't lead to a major decline, which has of course given bulls even more false confidence. The Hindenburg Omen means there are a significant number of new 52 week single stock highs being made at the same time as a significant number of new lows is also occurring. It points to a bifurcated market. Up until these past couple of years, the signal had a decent track record for predicting market declines, however, like all other technical signals it has lost its predictive effectiveness in the age of money printing.

Nothing Matters Until It Collapses
Similarly, well known market technician Tom DeMark , said yesterday that his proprietary "model", has basically stopped working in the U.S. markets. His proprietary "TD Countdown" system has flagged buying "exhaustion" several times this year ("13 count"), yet the market kept going higher. In other words it's a system that worked in real time for over a decade and has been successfully back-tested over several previous decades, yet within the past two years stopped working.

Thirty Years of Imported Deflation - One Container at a Time
This one chart tells the story of the U.S. economy for the past thirty years. It's the 10 year yield, which has been tracking imported deflation as the U.S. economy was sold to China and India by the corporate frat boys. This essentially equates to real U.S. economic activity deflated by debt. Without the constant demand leakage caused by net imports (aka. trade deficit), prices would have never stayed low, interest rates would have risen, monetary policy would be rendered inert. So essentially, constant outsourcing enabled monetary policy expansion, thus papering over the underlying damage that was occurring to the real economy in the background. Contrary to the beliefs of many Elliot Wave types, there is no discernible EW pattern here (quite obvious to the naked eye), because this is not a speculative instrument subject to social mood. This tracks economic capacity and the gap between supply and demand. When the output gap is increasing, interest rates are able to fall. Suffice to say, the output gap won't be narrowing any time soon. This will go deeply negative during the collapse. 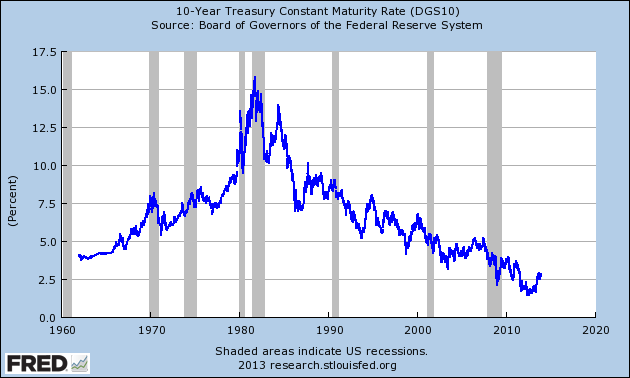 U.S. policy-makers didn't want to fix the stagflation problem at its root cause i.e. structural lack of competitiveness combined with foreign export mercantilism (unfair trade), so they just papered over it with debt and turned a blind eye to the massive trade (im)balance which enabled monetary expansion. 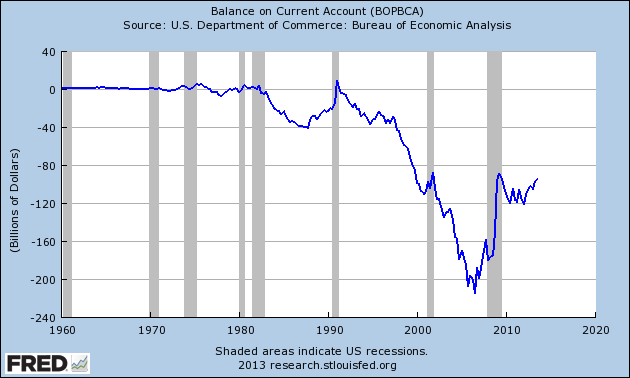 Debt Now @350% of GDP:
The real issue in all of this of course is that this globalized ponzi model has generated a chasmic latent output gap obscured merely by ongoing debt accumulation and holiday shopping sprees. On the other side of the reset, the magnitude of that gap will be fully revealed and the underwear will be mighty stained at that juncture, to say the least. 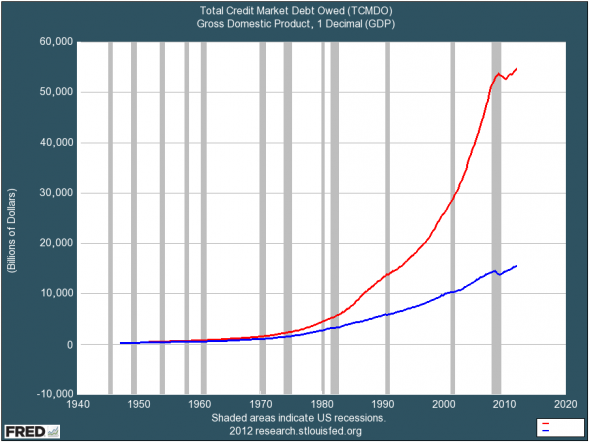