Rampant zombies in heated lust with the status quo, are in for a rude awakening...
Books of Bullshit
The lies and bullshit continue to flow at an historically unprecedented rate. The entire global economy is based solely upon a universally accepted fabrication. Today we were told that of the five "strongest" economies" predicted for 2014, three will be the U.S., Japan, and China. However, earlier this week we were also reminded that these three economies are the largest money printers in world history.


The U.S. is the Tallest Midget In the Circus
On a relative (to GDP) basis, the U.S. economy has the lowest stimulus of the three; nevertheless, at the current rate, the U.S. is still monetizing 7% of GDP and borrowing a further 5%. According to the above article, all of that stimulus makes the U.S. economy number one in "growth". You can't make this shit up. The illusion-formerly-known-as the economy would be in recession right now if it weren't for this society's overwhelming compulsion to bankrupt its own grandchildren. Just imagine the "growth rate" if policy-makers were only "smart" enough to rob the grandchildren for a few more percentage points of economic "growth"...
http://www.zerohedge.com/news/2013-12-11/matter-stunning-perspective-china-money-creation-blows-us-and-japan-out-water 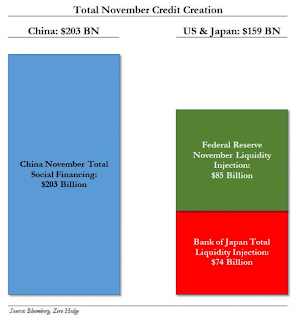 The Point of Recognition was not Recognized
This level of deceit and outright buffoonery should have brought collapse a long time ago. However, the Idiocracy was too stewed in junk food and junk culture to recognize the point of recognition. It's a society too fucking stupid to realize how stupid it is. Therefore, the brick wall of reality will appear seemingly out of nowhere and monkey hammer the zombies at large while they have their heads firmly planted up their own asses.

Life in the Old Age Home
We live in a globalized old age home in which nothing is allowed to change. Picture dinner time being changed from 4:30 to 7:00 and the old folks going bat shit. Same thing applies with the global economy. It's a lurching catastrophe run by and for old people. Obama was elected on a platform of "change" i.e. from the Bush Administration. Since then, Obama locked in the totally unaffordable Bush tax cut for the ultra-wealthy, he extended the two military blunders, he maintained the Bush-doubled defense budget, he kept Guantanamo Bay open, he massively increased drone attacks, he let the NSA run rampant, and he didn't lift a finger to reform Wall Street (i.e. the one thing he absolutely had to do to prevent another meltdown which is now guaranteed). And now his universal health care program is circling the drain because he didn't realize that the older generation who already have Medicare would have their flunkies in Congress do everything possible to systematically dismember it. The only thing that changed since 2008 was Obama himself. He went from being a young man to being an old man.

The Joke is On...Everyone
This (below) just in from ZH, more on the theme of generational theft going on now in broad daylight with the Kardashians running in the background. The geriatric Faux Newstards think they are getting away with something. They think that they are running up a tab that the next generation(s) will cover. Unfortunately, it's going to be hard to stick the next generation with the tab, when they are still living at home and playing xBox in the fucking basement. The joke is only on those stagnant zombies who still think that any of this is actually real.
http://www.zerohedge.com/news/2013-12-16/chart-day-what-generational-theft-looks 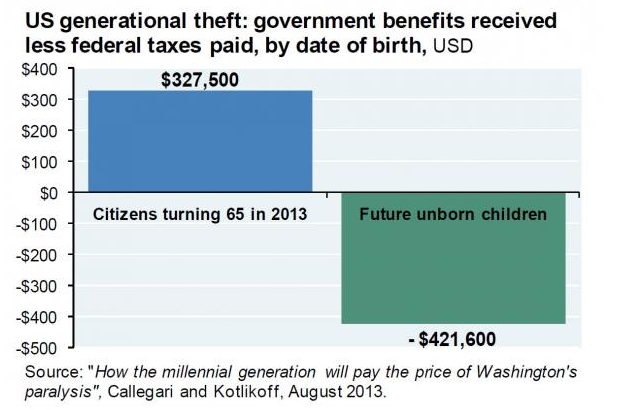 "How the Millenial Generation Will Never Pay A Dime Towards This Delusion"
Add in a totally stagnant job market - an economy running on debt and money printing - student loan debt at bubble highs ready to implode - Baby Boomers working until they are 100 because they can't afford to retire, and that -$421,600 number may as well be -$4 trillion. None of it will ever get paid.

Keep it Real
Those who can somehow maintain their humanity and sanity through all of this illusory contrivance, will be ultimately rewarded. The zombies at large have no ability to endure adversity and otherwise live a real life not predicated upon a continuous stream of consumption oriented dopamine hits. The Prozac is already flowing hot and heavy and the bubble hasn't even burst yet. If life inside the Matrix is difficult, wait until they try life outside the Matrix. There was another school shooting on Friday, but the stoned masses barely even noticed. Shoot-outs at schools are now just another reality TV show on the cable infotainment package at the old folks home.

This shit show is in sudden death double overtime, so don't drink the fucking Kool-Aid. And as much as possible, avoid zombies, who will make every attempt to crush your soul into a black hole oblivion just like theirs. Suffice to say, for those who don't know what I'm talking about, it's already too late.

The Locus of Risk - Emerging Market Debt
In my last post I hypothesized that the locus of highest risk was Emerging Market carry trades funded in Japanese Yen. Below, just as we would expect, the emerging market sovereign debt ETF (red) made a high last June and since then can't get out of its own way: 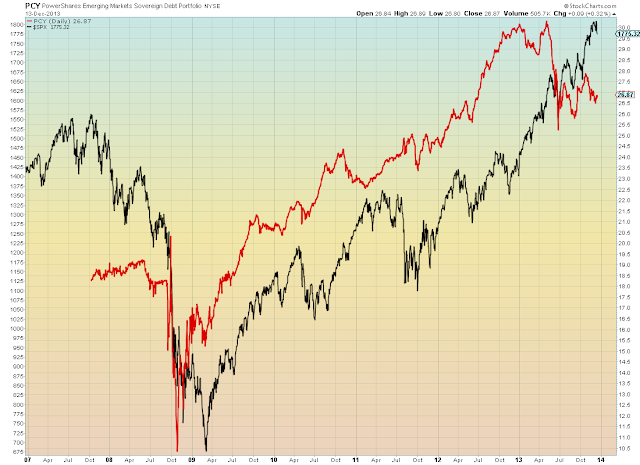