A Stagnant Monoculture aka. Yuppy Disneyland

Pure good or pure evil are seldom found. Balance is critical to health. Somehow via practiced artifice and contrivance this society has managed to achieve a massively leveraged degree of imbalance in every direction - economically, environmentally, health-wise, geopolitically. It's yuppy Disneyland - an inevitable outcome of a global economy run by and for corporations. Unfortunately, while we wait for this make-believe circus to collapse, our children are being fully indoctrinated in the Mickey Mouse club, and therefore have only known a way of life that was largely fake and contrived. So, it's highly likely that when reality arrives with all of its lumpy inconveniences, they may well want no part in it...

A Deeply Corrupt CEO Country Club
CEO pay has increased 1,000% since 1950. As a ratio of average worker incomes it's now 204:1, which means CEOs make every two months what an average worker makes in their entire lifetime. The difference between 1950 and now of course is that today's economic growth rate pales in comparison to what it was back then. Debt adjusted, GDP growth today is firmly negative. That was an era of organic growth and innovation, whereas today is an era of financial and marketing alchemy. Today's CEOs "earn" their ludicrous overpay by shipping jobs and industries to other countries, which is the predominant business strategy of the current era. All of which will continue until such time as this wholly imbalanced "economy" collapses under the weight of its own decadence and malfeasance:
http://www.huffingtonpost.com/2013/04/30/ceo-to-worker-pay-ratio_n_3184623.html 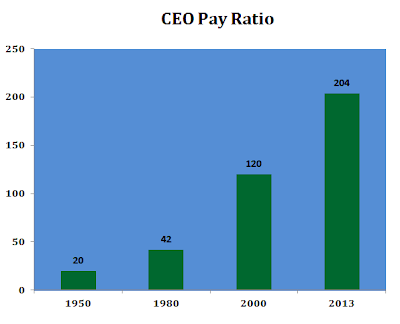 Other Key Attractions at Yuppy Disneyland:

Crop Monocultures aka. Junk Food
- Devoid of nutrition
- Disease and diabesity propagating
- Environmentally catastrophic
- Massively energy intensive
Suffice to say that combining the world's most expensive health care delivery system with McDonald's and Coca-Cola as dietary staples, is a lethal combination, no pun intended. At some point the ability to fund that madness will reach a brick wall at which time diabesity will be a death sentence.

Overrun with Boy-Men
Yuppy Disneyland and its denatured substances happens to be destroying men at an alarming rate. Fortunately for those who need it, the pharmacology industry provides testosterone replacement therapy.
Here are the side effects:
- Enlarged prostate (risk of having a "urine accident")
- Increased risk of prostate cancer
- Lowered sperm count
- Increased risk of heart attack
- Enlarged breasts
- Problems breathing while sleeping
- Blood clots in legs
- Headache, vomiting, diarrhea
For those pharmacologically assisted "men" who manage to survive the above "side effects" and who don't mind having large breasts, wearing a diaper, and vomiting randomly, their cock will be bigger and may actually work for a change.

I may fill in some details later, I wanted to get my thoughts down in the meantime. My son told me I'm a misanthrope which can either mean someone who doesn't like people (social interaction) or someone who detests humanity. In Yuppy Disneyland I suggest that the difference is purely academic. If one were to invert all of the above fabrications, then we would have a starting point for a real and sustainable way of life.

While we wait for this phony shit show to collapse like a cheap tent, we meanwhile suffer the unbearable lightness of being surrounded by shrink-wrapped zombies...so try to keep it real.