Globalization Will Collapse. Please Be Patient

I just read David Stockman's polemic about the various issues afflicting the U.S. economy. The facts and data were excellent. Other than failing to identify the true root cause of the problem and coming to an altogether wrong conclusion, it was flawless. I suggest that it will be mighty hard to fix a problem when all effort is being put into ignoring its root cause...

Keynes Never Said That
Overall, his facts are good, but his rant is filled with some major fallacies not the least of which is equating Supply Side economics with Keynesian economics, which is a total betrayal of Keynesian principles. As I explained recently, Keynes never advocated using fiscal or monetary policy to subsidize consumption binges, tax cuts for the ultra-wealthy, military blunders or other pointless ventures. Stockman does offhand admit to being a former adherent to Supply Side economics so perhaps comparing Voodoo economics to Keynesian economics is his bizarre attempt to assuage his guilt.

There Is No Free Lunch
Again, as far as the basic facts I agree with what he says, but I find it overwhelmingly egregious that he never once mentions the issue of the trade imbalance, which is like describing the Titanic and not mentioning the big fucking hole in the side of the ship. There is no free lunch - no country can outsource its economy to another country and sit back and collect inflated profits. It's a strategy that only a handful of countries throughout history have ever tried - for good reason. Every single other country on the planet right now is trying to gain new industries, not give them away. Only the frat boys who failed history class haven't figured this out yet. Most of the symptoms that he mentions - fiscal imbalances, monetary inflation, billionaire wealth etc. are all derivative effects of globalization and the U.S. trade imbalance. Trade deficits finance fiscal deficits (current account must equal capital account). Monetary inflation (printing money) in the absence of hyper-inflation is only possible IF the overall economy is in a state of continuing deflation - deflation is imported from the Third World on an ongoing basis, as the U.S. middle class fades into oblivion. Billionaire wealth in this current era of course is purely a function of industrial arbitrage - swapping out high wages for low wages. And lastly, the welfare state that he decries is what I call the "Foodstamps plus" anti-rioting program. It's the breadcrumbs falling on the heads of the "indolent masses" whose jobs are now permanently relocated to China.

Government Is The Root of All Evil - Or Is It?
Of course, Stockman's entire theme is that government is the root of all evil. Out-of-control greed on an historically unprecedented scale apparently plays no part. I am no fan of big government or bureaucracy, but there is deep irony that the developed nation that worships at the altar of "small government" has the most dysfunctional government in the developed world. Comparing Canada's government to the U.S. government is like comparing a library to a circus - one puts you to sleep and the other is for sheer entertainment. Even Turkey's President took a swipe at the U.S. shutdown this week. I suggest that having an effective and well run government is logically impossible if the overwhelming ideology of the country is that such a thing can't possibly exist.

The End of Mass Consumption
The elephant in the room that Stockman ignored and few if anyone wants to acknowledge at this juncture is that the Westernized consumption-oriented lifestyle was always doomed to fail. These trade deficits, fiscal deficits, money printing programs, food stamps are all just symptoms of the much bigger problem, which is the immutable fact that the consumption-oriented lifestyle is neither scalable nor sustainable across 7 billion people. The U.S. has 5% of the world's population yet consumes 25% of world resources so 3rd grade math suggests unambiguously that globalization was going to put an end to mass consumption. "They" want what we have and are willing to work a hell of a lot harder to get it. End of story.

Mind The Output Gap
Stockman's and most other observers' real blind spot right now is that no one wants to admit that with each massive bubble, the underlying economy deteriorates further. The system can in no way stand another melt-down which is what these accumulated balances are setting us up for. Stockman goes even further and says that Bernanke was wrong to assume that a depression would result from 2008. Unfortunately, depression was always inevitable on the other side of globalization's collapse - whether now or in 2008. By putting it off another several years and expending all of the fiscal and monetary ammo, policy-makers have only ensured that the outcome will now be far worse. It all comes down to the output gap - the gap between supply and demand. What globalization has done is to artificially amplify demand which has had the follow-on effect of artificially amplifying supply capacity. So, unless one assumes that this third asset bubble will go on indefinitely - an asinine assumption - then we can assume that soon demand will be going lower while supply will remain inflated. Alternatively, just go into the local shopping mall and envision what happens when no one shows up to buy 90% of the crap on the shelves.

The Silver Lining
Suffice to say that all nations on this planet aside from Cuba and Antarctica are tied in to globalization and will be affected by its ultimate collapse. That said, we are presented daily with reasons why the system needs to collapse in order to lead to a more fair, humane, and environmentally sustainable way of life. The fact that so few people suspect that collapse is inevitable at this late juncture is by far the most important and astounding fact of all. There is not one rational argument for why this imbalanced global clusterfuck held together by money printing and fast money speculation won't collapse, other than to extrapolate the recent past into the indefinite future.

All Aboard !
We are just waiting for the last few passengers, and then we will be on our way... 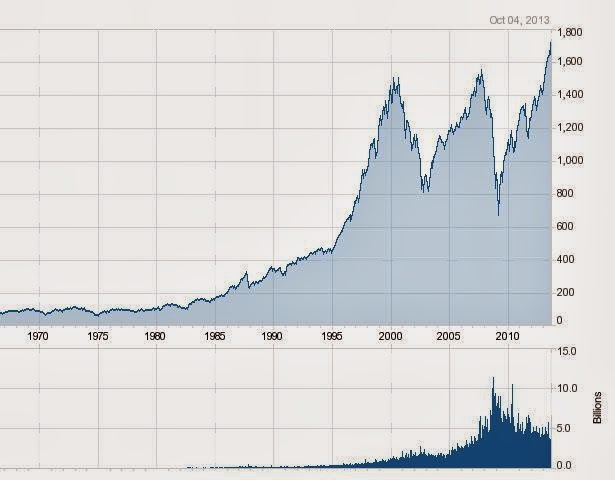