A timely reminder as to how and why this global economic lunacy will end with history's largest bank run. Using debt to resolve a debt crisis is history's largest fool's errand aided and abetted by history's largest boatload of fools. 520 global interest rate cuts in five years has incentivized nation states to supplant private borrowing with public borrowings to prop up their economies. The Minsky Moment will arrive when the marginal borrower is no longer able to rollover its debts, causing a cascade of defaults as lenders pull back from the market...


"The "borrowed time" central banks have created with ultra-low interest rates following the collapse of Lehman Brothers in 2008 has not been well used".
- BIS, Bank for International Settlements, June 2013

Of all of the economists of the past century, I believe Hyman Minsky's insights into our current situation, to be far and away the most prescient and appropriate.  As I said recently, with respect to the ever increasing weight of deflation, all we are waiting for now is the "Minsky Moment" i.e. the point in time when the credit bubble unwinds violently.  Having just re-reviewed his "Financial Instability Hypothesis", below I review its applicability to our current situation.  The real question on the table is who will be proven right in the end, Bernanke who is attempting to permanently elevate asset prices and smooth asset price volatility, or Minsky who concluded that attempts to smooth asset prices leads to excessive risk taking, thereby ensuring a much more catastrophic asset price collapse.

First off, Minsky divides borrowers into three categories: "hedge", "speculative" and "ponzi".  Hedge borrowers have ample cash flows which they can use to pay the  interest and principal on their debts, so they are low risk borrowers.  Speculative borrowers are those who can cover the interest on their debts, but cannot pay the principal from income and therefore need to roll-over their debts by re-issuing new debt to replace maturing debt.  I would submit that today, at minimum all developed nations are speculative borrowers.  None of the debt the U.S. government issues at this point in time is amortizing, meaning that it pays off maturing bonds by issuing new ones.  The same applies for most other developed countries.  Lastly, of course, is a Ponzi borrower who must issue additional new debt to not only pay the maturing principal, but also pay the interest on existing debt.  A Ponzi borrower's debts of course are non-amortizing and growing inexorably larger over time.  Again, I submit that today the vast majority of developed nations are Ponzi borrowers which of course is the riskiest type of borrower.  As proof I offer the fact that for example, the U.S. growth rate is ~2%, whereas the deficit is ~5% of GDP. The deficit represents new borrowings.  In the context of Minsky's definitions, what would happen to GDP if the deficit (ability to borrow) is removed and therefore the GDP is negatively impacted i.e. would the government still be able to cover the interest on its debt? What about all of the other contractual obligations that could affect the U.S. credit rating, could they be covered? Likely not. That is a scenario that could get tested in just a few weeks if the debt ceiling is not lifted. Still , the U.S. is "fortunate" in being able to monetize its deficits, because most nations are not as fortunate in their ability to print money (which is an asinine strategy to rely upon long-term).

The Gift that Keeps on Giving
Five years after the financial crisis, these OECD countries are still borrowing large chunks of their economy on a recurring basis. In reality none of these countries ever came out of recession. Only econo-dunces would deem borrowing 10% of GDP to generate a 2% growth rate as an "expansion". If any of these countries are shut out of debt markets it's game over: http://www.oecd-ilibrary.org/economics/government-deficit_gov-dfct-table-en 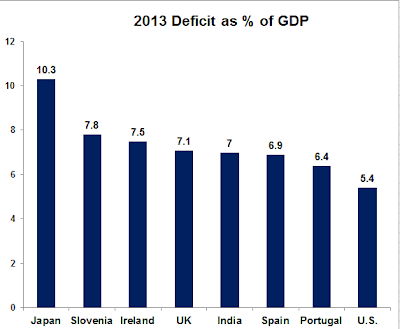 One Eyed Man in the Land of the Blind
Why I am still willing to own short-term (1-3 year) U.S. Treasuries at this juncture, despite the 5% deficit and the buffoonery in Washington:
http://www.gfmag.com/component/content/article/119-economic-data/12370-public-debt-percentage-gdp.html#axzz2hYfByFTA 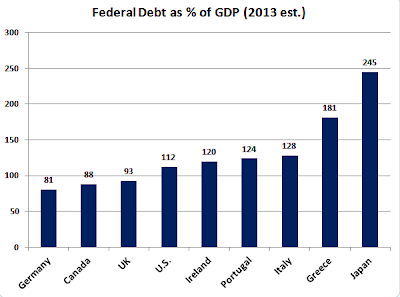 Turning Japanese
We are told that Japan's debts and deficits are low risk because it's money they owe themselves. First I would point out that the charts above show via Japan how much debt can be accumulated when the economy is in a constant state of deflation aka. zero growth AND when the country can monetize its own debt to keep interest rates low. If both those conditions are NOT met, the borrow-to-oblivion strategy will fail sooner rather than later (e.g. Greece, Cyprus etc.). Secondly, it's asinine to assume that borrowing and spending one's own savings is a low risk strategy. At some point, those savings will need to be tapped for retirement, at which point the Japanese will realize that they spent their savings and left behind nothing but worthless IOUs. Only Econo-dunces can consider that to be a low risk strategy.

Building upon the above definitions, Minsky asserts, logically, that as time passes and economic prosperity is realized, then borrowers and lenders take on ever-increasing risk.  Hedge borrowers eventually increase their leverage until they become speculative borrowers, speculative borrowers increase leverage until they become ponzi borrowers.  The longer, the "uninterrupted" expansion lasts without a credit event, the more leverage is increased across the economy.  Of course his key insight (albeit common-sense) is that none of this ends well.  More importantly, he states that deflation of this increasingly unstable equilibrium, does not require any "exogenous" event i.e. over time it becomes inherently less stable and more prone to endogenous collapse.  The reason being, that the marginal ponzi borrower i.e. the entity least able to cover its debts, eventually runs out of new sources of funds - maxed out.  At that point, that marginal ponzi borrower becomes a net seller of assets to meet its commitments which begins the asset "revaluation process" bringing about a forced rewind in assets which cascades across all borrowers.  He also states that risks are compounded by the various "interventions" designed to keep the economy operating "within reasonable bounds".  In other words, by attempting to attenuate all recessions, Central Bankers have unwittingly facilitated the ever-increasing accumulation of debt to lethal and unsustainable levels.  In academic terms he is describing the "Bernanke Bargain". We don't know where the Minsky Moment will begin. It may not begin at the national/sovereign level, it may begin at the state or local level and reverberate outwards from that point. Since the bankruptcy of Detroit this past year, the Municipal bond market still has not recovered: 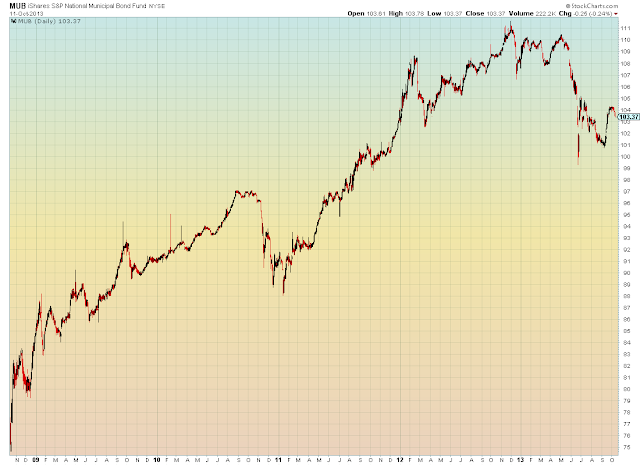