Maximum Greed: History Will Not Be Impressed

Today Sheila Bair, a Republican and former chairwoman of the FDIC, penned her own albeit meek diatribe against crony capitalism (below). Upon reading it, I was left with only one question that apologists for "the system" that allowed greed to be taken to its full self-cannnibalizing extent, will be held to account for on the other side of this fiasco i.e. was this inevitable? Was it inevitable that the American middle class would be eventually marginalized into oblivion to the point of being derided as "socialist" for accepting food stamps to feed their children? Because if it wasn't inevitable, then the beneficiaries of this catastrophe need to cough up their ill gotten gains from pursuing the rent seeking "activities" that led the U.S. to this  economic dead end. If it was on the other hand inevitable, then capitalism itself has a lot to explain, as to whether any sane nation would want to pursue this model. And suffice to say, it would be a hell of a lot easier for the Lost Boys of the Idiocracy to defend their deluded fantasy that the country's economic malaise is due to the laziness at the bottom, if it wasn't for the fact that corporate profits as a % of GDP are at a 70 year high and wages as a % of GDP are at a 70 year low, and there is a distribution of wealth that would make John D. Rockefeller blush. Of all the "unsustainable" aspects of this Ponzi model, nothing is more unsustainable than these historically enormous profit margins, something Wall Street is going to learn the hard way. And I've heard some dunces on the right call food stamps a social program. Allow me to clarify - a social program gives people the comfort of knowing that their country is looking out for them. Food stamps by contrast, are merely tokens to keep the heavily armed and increasingly enraged masses at bay long enough for the wealthy to make alternative living arrangements...

The full article is here, and a snippet is below:
http://www.nytimes.com/2013/02/27/opinion/republicans-must-bridge-the-income-gap.html?_r=0 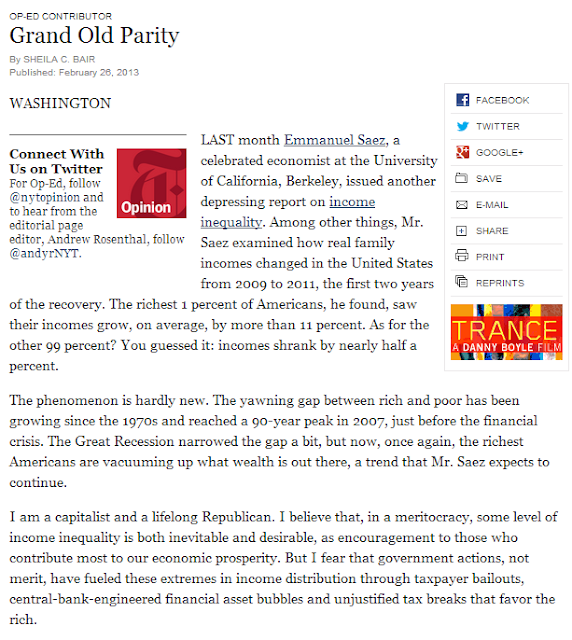