The Last Pump and Dump 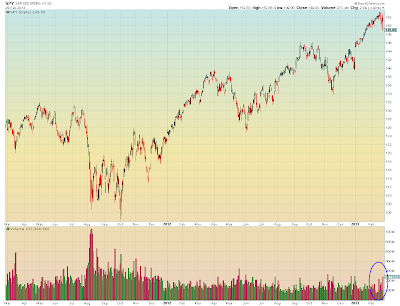 Heavy Distribution - A Net Month's Worth of Selling Already...
Whatever conviction the market lacked on the upside, it is already more than making up for on the downside. Look at the lower volume pane where four up days with volumes below 100 million, including Feb. 12th's insanely low 65 million, have now been offset by four down days with volumes above 150 million, culminating in today's 245 million. As of today, total down volume exceeds total up volume on a daily cumulative basis going back to January 22nd - despite a ratio of 14:10 up versus down days. So even though it has only been four days since the market made a six year high going back to 2007, we've already seen a month's worth of selling camouflaged by the fact that the market rose more on its up days than it fell on its down days despite volume being higher on the down days. That's what professional traders politely refer to as "distribution" aka. institutional investors unloading large amounts of stock onto small investors after a big run-up...

Sadly, retail (small) investors had been doing a good job of avoiding the stock market for the better part of the past four years, but they couldn't resist the urge to show up at the last minute to once again be Wall Street's bagholder. All because their dunced investment advisors no doubt told them that this was the beginning of a new bull market.

Meanwhile, it would appear that the test of market resiliency in the face of motivated selling, that we have been waiting for, is now beginning. Everything got shellacked today, except gold which got monkey hammered last week - and of course Treasuries the sole risk-off asset class.

One thing I neglected to share last week was Prechter's latest missive. I can't show all the charts due to copyright, but he showed sixteen separate sentiment measures all showing multi-year extremes in bullish sentiment.

He also showed the VIX at a six year low, which I have shown several times, and the CNN "Greed" index, which I also showed previously.

Below, is the graphical depiction of retail bagholders showing up late to the party, yet again...
("LO" = Long Only, as in unhedged). 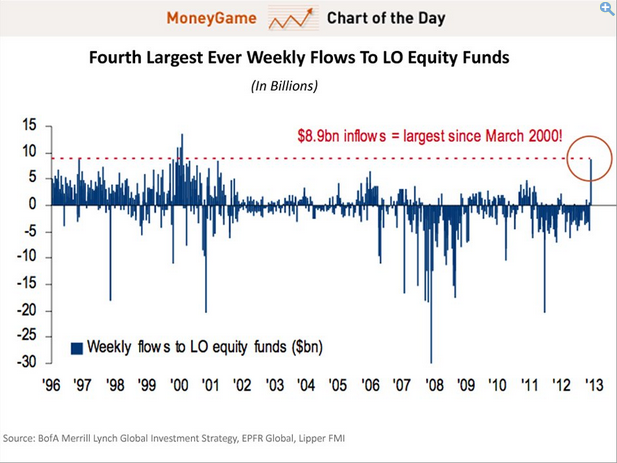