"Rome seeks its own glory, wars against other peoples to subjugate them, revels in material existence, lives off the work of slave labor, allows many to die of poverty and starvation, and promotes entertaining circuses and gladiator spectacle."
Archaeologists won't understand how this Roman Circus was conned by Caligula. The answer is quite simple: Trump weaponized American mythology against the populace. Things they already wanted to believe, he convinced them were true again, via executive fiat. Because to question the lies would be "unpatriotic". This is a case of the emperor has no brain...

Club Orlov: License to implode:
"As the endgame approaches, those still nominally in charge of the collapsing empire resort to all sorts of desperate measures—all except one: they will refuse to ever consider the fact that their imperial superpower is at an end, and that they should change their ways accordingly."


Most people are well aware that Trump is an incompetent show man. Even his own base knows that he's as dumb as a brick - which is what makes him "relatable". Nevertheless, most people believe that the office of the president conveys special powers upon the officeholder irrespective of incompetence - the ability to bypass reality via executive fiat. However, as we all know, human beings have no magic powers to overcome reality, at best this species has the ability to marshal the forces of denial in an epic battle against reality. Until such time as those forces are spent. Voila.

There are many massive lies being propagated right now that are imploding in broad daylight. The most obvious being the myth of U.S. energy independence: 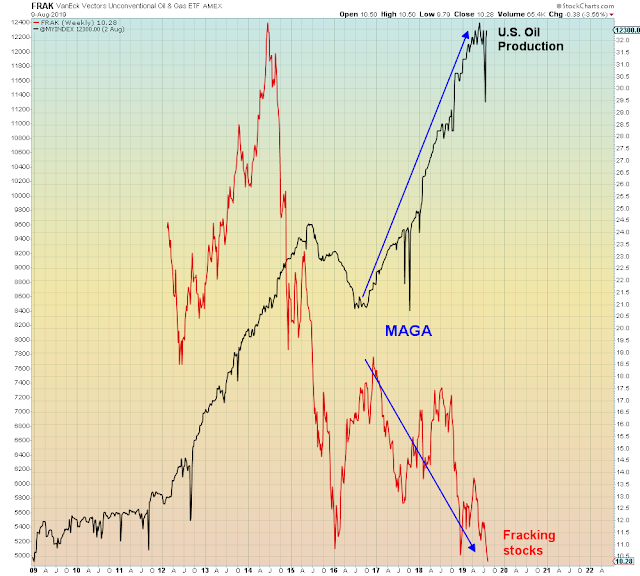 As Barron's points out this week, the most lethal delusion any investor can believe right now, is that trade wars are good and easy to win:

"Losing a trade war would be a catastrophic blow to the national psyche of China or the U.S. But there’s something even more dangerous than losing: thinking you can “win.”"

Both sides in this fight now seem to be gaining confidence in their ability to prevail, and that’s why investors should worry"

negotiating positions and the macro backdrop reveal that each side perceives that the benefits of standing one’s ground outweigh the benefits of cooperation...We expect further market weakness will be required before de-escalation is achieved.”

It's two lies for the price of everything:

Below, a prescient prediction circa 2017, albeit predicated upon third grade economics - which puts it far beyond the reach of the majority of today's economic pundits:

"Tax cuts that boost post-tax profitability and increase budget deficits will draw in capital from abroad...This will, in turn, increase the value of the U.S. dollar. Increases in the value of the dollar will increase the cost of U.S. exports and reduce the cost of imported goods, resulting in rapidly growing imports and reduced exports, reducing overall demand for domestically produced traded goods.  Manufacturing will be especially hard hit because manufacturing generates about 80% of all traded goods"

Trump's entire economic platform is a massive lie from end to end: 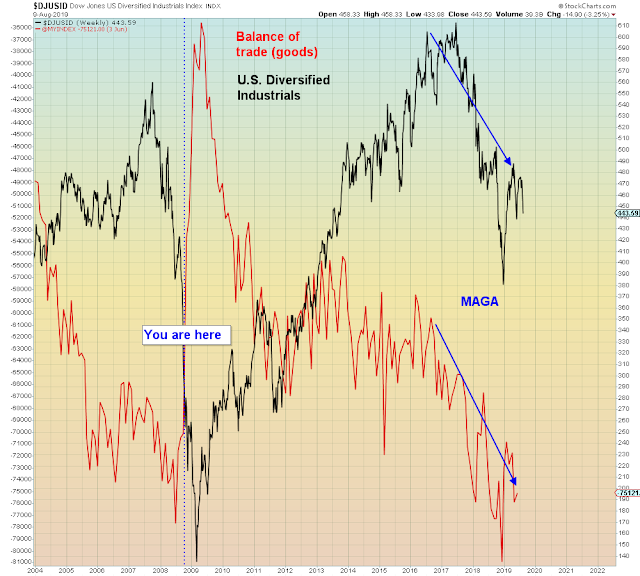 Remember when the debt ceiling crisis imploded markets at the beginning of August, 2011? That occurred because the Republican-controlled Congress was denying President Obama an increase in the debt ceiling. In the end it blew up in their faces and they were forced to back down.

Ironically, the exact opposite scenario just took place: The Roman Senate just eagerly approved Trump's mega budget, which is by far the biggest risk being ignored right now - the fact that Trump's mega budget deficit is sucking all of the liquidity out of the market. Zerohedge has been pounding the table on this, when they can find time between UFO sightings, but mostly it has been assiduously ignored. For their part, the Fed will remain sidelined because they don't want to appear to be monetizing deficits. Which would be a giant leap towards "MMT": Modern Monetary Theory. To paraphrase from above, it will require significantly more market weakness before they are convinced to intervene.

“The Treasury’s cash balance decision is in some sense far larger in its impact on reserves than the Fed’s decisions on what it did with its assets,”

The Treasury’s cash buildup will occur during a dead period for the Fed, which doesn’t meet again until mid-September"

“This dollar funding problem is already causing problems, in terms of behind the scenes, like repo, so financial conditions are going to change and force the Fed to soften more”


There is only one country that has scope to LOWER interest rates, thus shrinking the massive interest rate differentials between the U.S. and the rest of the world. Something currency markets have already figured out.

The vaunted TINA trade has only one direction left to go: 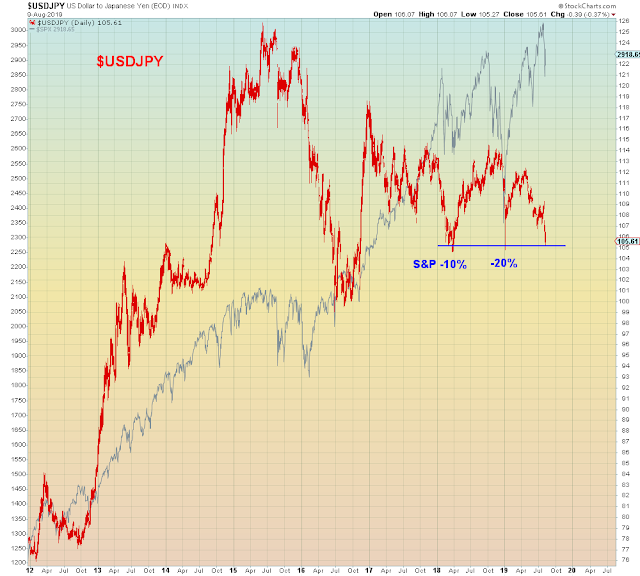 In summary, financial conditions are going to "change" and cause the Fed to monetize the U.S. debt. However, before that happens, come the obligatory margin calls. And then we'll see if all the king's horses and all the king's men, can put humpty dumpty together again.

"There are times when an investor has no choice but to behave as though he believes in things that don't necessarily exist." 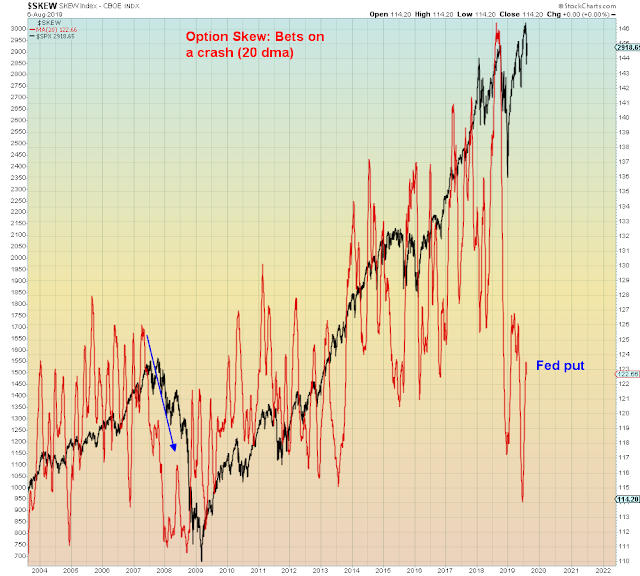 "Never an honest word, that was when I ruled the world"