The definition of senility is attempting the same failed economic policies over and over again, each time trusting a bigger circus clown. Those who've doubled down on Donny are in for the surprise of a lifetime. Facts and data can't compete with sweet nothings told by a Manchurian Candidate trained by WWE: 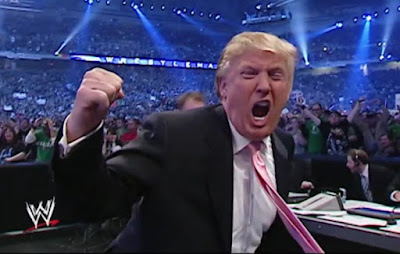 When I first started this blog back in 2006 I believed that the collapsing housing bubble would end the reign of Supply Side Voodoo Ponzinomics for good: The outsourcing of the 'Conomy for fun and profit. Clearly I was wrong. My mistake this past decade was not seeing that Japanification has gone global - the recycling of failed ideas over and over again each time expecting a different result. All to benefit a senile old age home incapable of handling change. Hence, another round of corporate Shock Doctrine ensued. Nine million mass layoffs to make the quarter. On top of that, the money printing and Ponzi borrowing. What makes the U.S. different than Japan is the sheer level of buffoonish arrogance extant today. An entire generation having conflated a reserve currency with "exceptionalism". Luck and hubris masquerading as previous generations' success.

It is that very fatal arrogance that drives the chasmic policy divergences between the U.S. and the rest of the world. Three years ago in December 2015, the Yellen Fed raised rates for the first time in nearly a decade, thereby imploding global markets. The Powell Fed just did the same - in addition to balance sheet rolloff at $50 billion per month, in addition to ECB liquidity withdrawal for the first time since 2016.

Global markets (ex-U.S.) are back to where they were three years ago when the Yellen Fed imploded global markets. A very expensive three year round-trip to nowhere.

Or should I say a ten year round-trip back to the Lehman 2008 level: 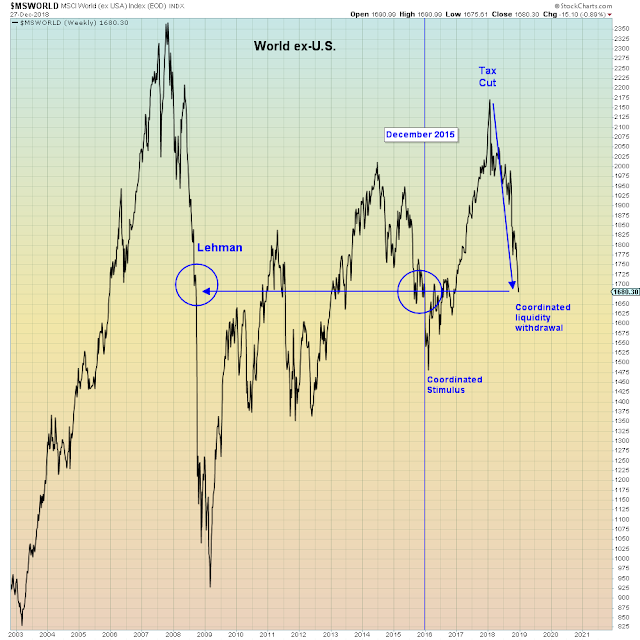 The Trump tax cut has been a one way gong show for the rest of the world since it was implemented last January. Per Econ 101, the concept is called "Crowding out" whereby large scale government deficits cause interest rates to rise due to asinine levels of bond issuance:

"The U.S. Treasury Department said government borrowing this year will more than double from 2017 to $1.34 trillion as the Trump administration finances a rising budget deficit." 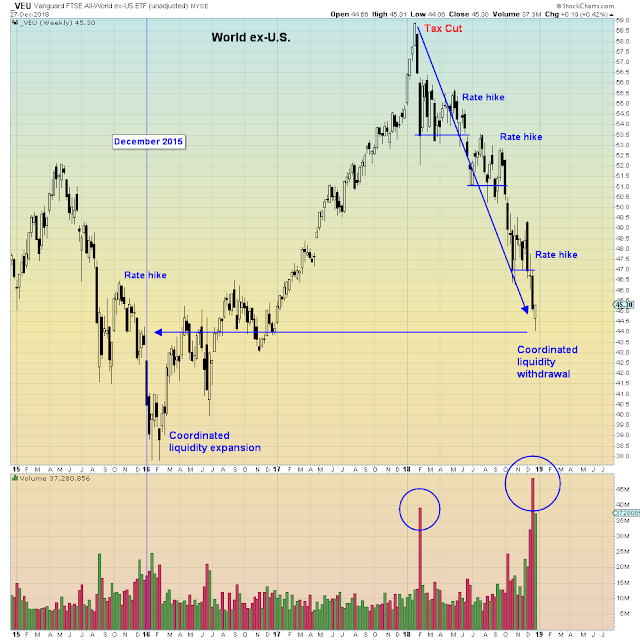 Bearing in mind that Wall Street is unanimous in their view that the casino will be higher one year from now than it is currently. Despite the fact that circumstances today are far more lethal than those that abided in 2016.

Being bearish or realistic in a society of aspirational zombies is neither challenging nor interesting. It's highly repetitive.

Today's oil collapse is deja vu of 2015/2016. Far too much investment in over-capacity. Global capital chasing short-term return at the expense of long-term solvency. 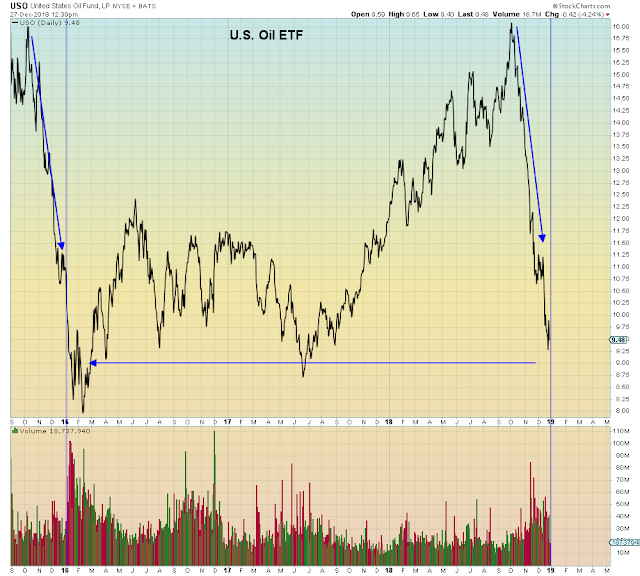 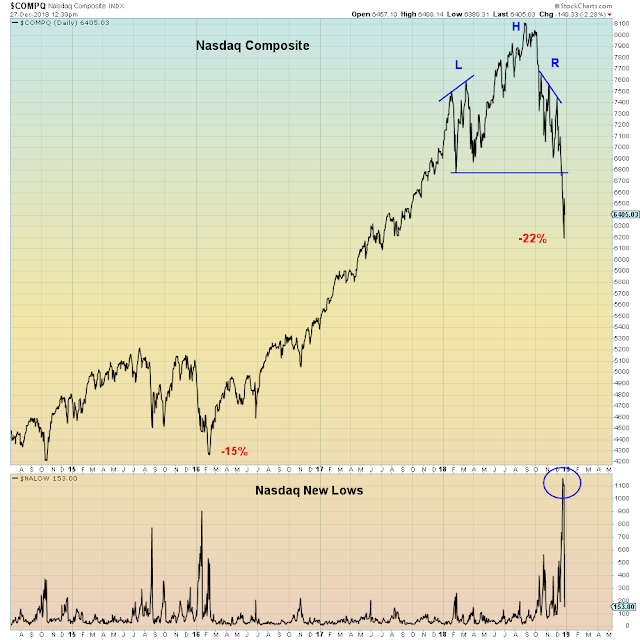 Three years ago banks and Financials held up until the New Year. 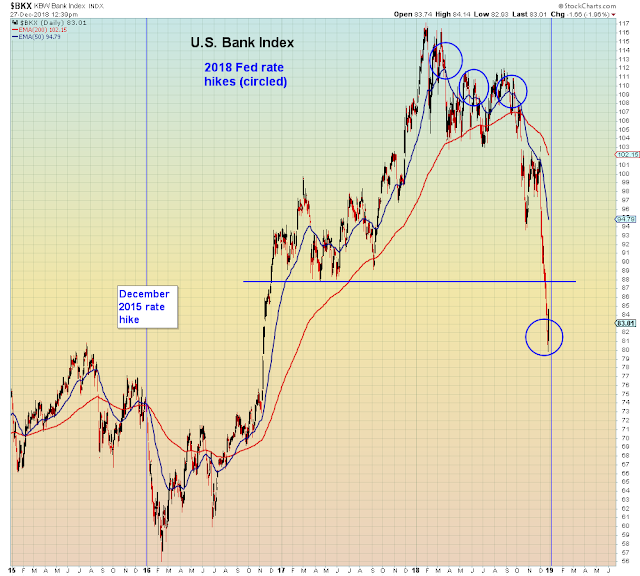 Round trip to implosion: 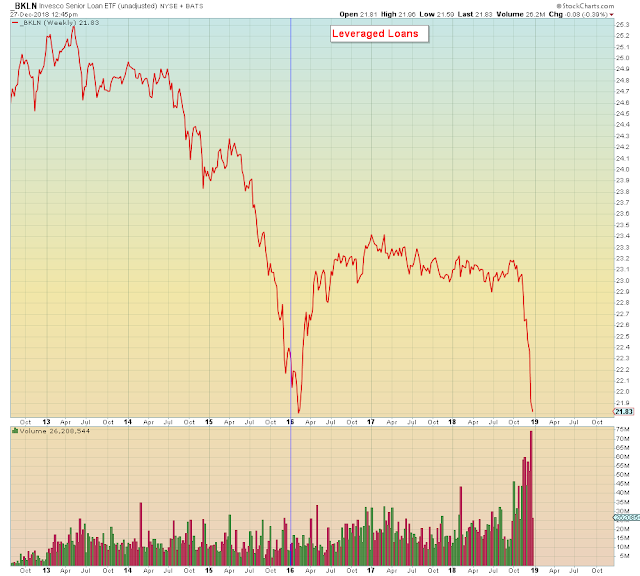 Market breadth, worse now than at the nadir of 2016: 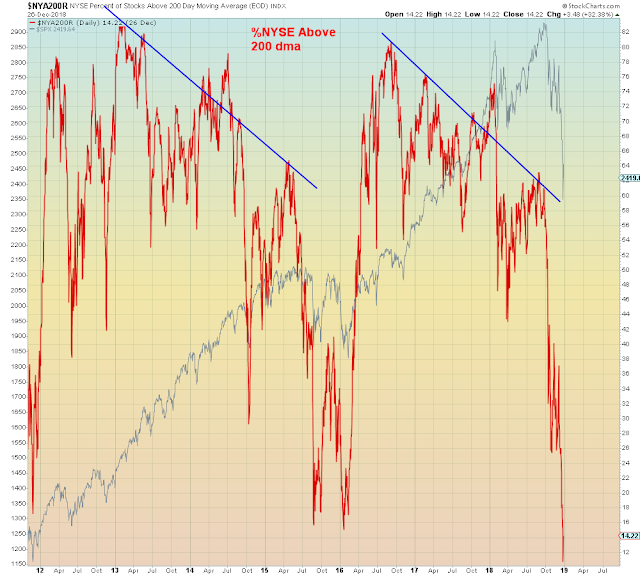 This is where it gets interesting.

The only reason the wheels DIDN'T come off the bus in 2016 was because of the rotation to safe havens, which bridged the gap between Central Bank stimulus and the return of the "animal spirits". Safe havens were truly safe back then.

Now, not so much: 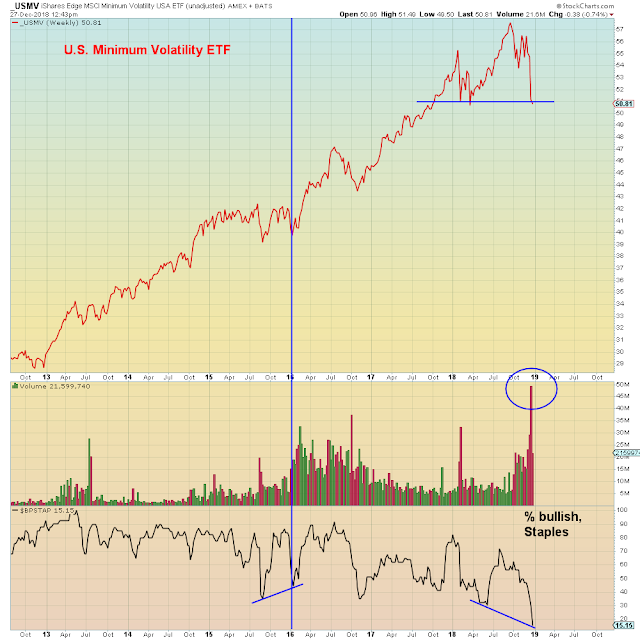 The other key difference between now and 2016 is the level of complacency now versus then...

Complacency born of fatal arrogance, serial bailouts, and a casino croupier for president. 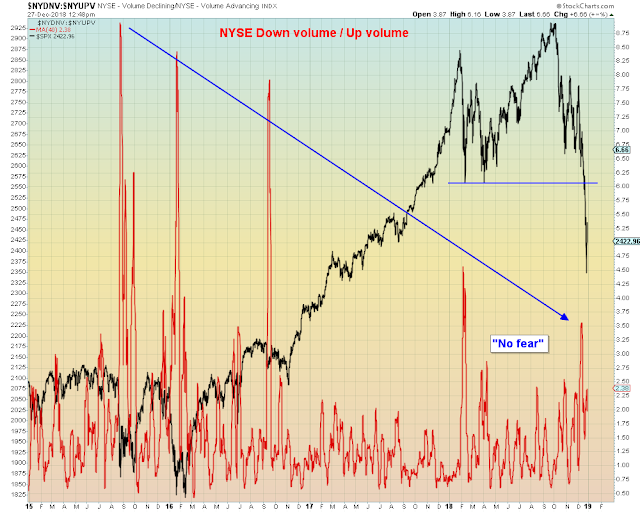 All of which means that regardless of what we may read in the business-oriented lamestream media, we are about to witness a level of volatility and uncontrolled implosion impossible to describe.

And no one sees it coming.

Why? Because it's already here. And it's amazing what zombies can come to consider "normal": 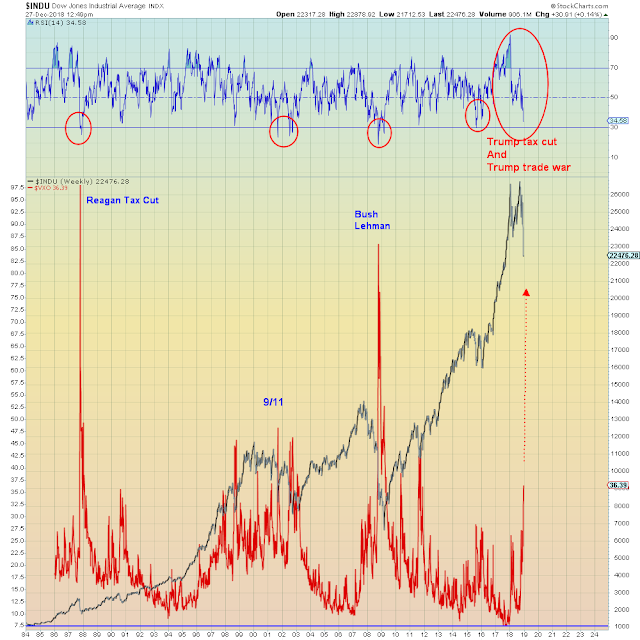