Billunaires took their massively inflated arbitrage profits thrown off by the global output gap, and invested them back into the ouput gap, making it even larger. And now it's imploding... 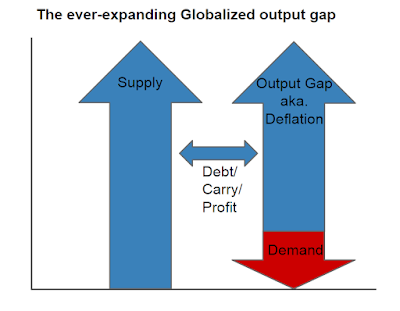 The fantasy premise of Globalization was that the developing world would bootstrap their way up to the big table first by being factory slaves and then by creating their own "modern economy". Their dependence upon exporting ever-cheaper crap, would yield to a balanced economy.

While all of that wasn't happening, the accumulating debt from the recurring trade imbalances was piling up in the form of subprime housing mortgages and 1% "Patriot loans". Bernankenstein decried the "global savings glut" aka. the profits from Child sweatshop labour. Which he monetized into 0% interest rates for stock market speculation. 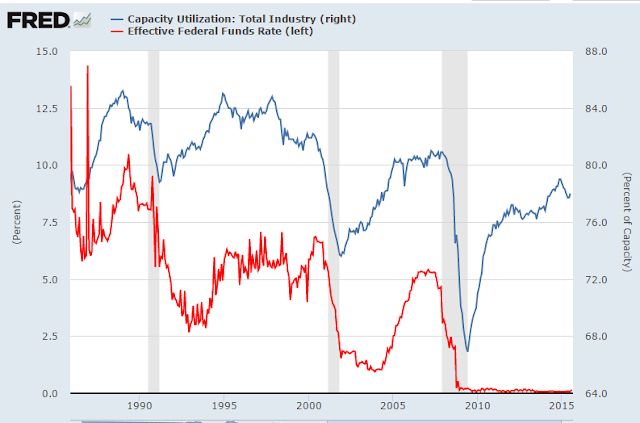 When 2008 came and imploded, the Globalized "Growth miracle" which was causing environmental degradation on an unprecedented scale, essentially stopped growing.

The fantasy was over, and worse yet, the developing nations had never achieved anywhere near a developed world standard of living.

They were now doing all of the things we used to do but at ten cents on the dollar. The difference taken up by arbitraged corporate profit. "We" benefited from 0% loans forever aka. free money as long as we were willing to look the other way to our standard of living being continually eroded. Which for zombies was their inclination anyways...

The average minimum wage of the BRIC countries is $1 / hour. They are the "superstars" of Globalization...


It gets far worse from there... 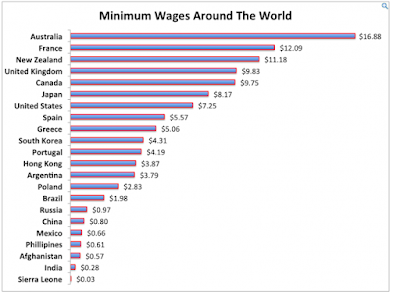 "It didn't work. Oh well"
Along the way, the fake pretense that Globalization would ever lead to higher standards of living for the Third World, was wholesale abandoned...

They then used 0% deflation loans to invest in deflation. Fucking brilliant
The "Atlas-like" job killing CEOs then took their asinine hubris to level '11' by using 0% poverty loans to invest in a commodity mega-bubble, under the premise that commodity demand would continue to grow forever at Ponzi-inflated rates. They never once made the connection between the 0% capital they were deploying, and the ever-growing global output gap it was creating. They "inadvertently" invested trillions into human history's largest supply/demand imbalance. And worse yet, in doing so they created a self-imploding momentum feedback loop as collapsing commodity revenue decimated the very countries that are the marginal consumer. 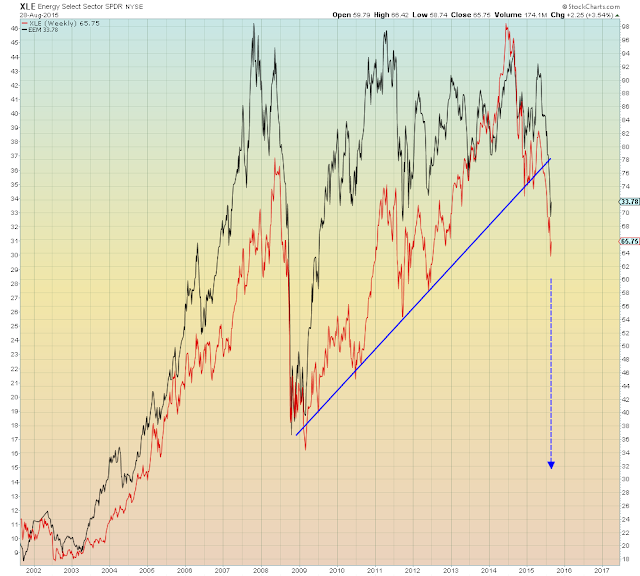 Globalization: The invisible bubble aka. the biggest bubble in human history
The narrative of the day is that this latest bubble - for those who even acknowledge it - is just the third in a never ending series of bubbles. Unfortunately, this third bubble is the one that forces everyone to finally come to terms with the fact that Globalization has failed, and the "halcyon days" when Third World wages slaves subsidize our standard of living, is over.

We are now in the acceleration phase of the momentum feedback death spiral between Emerging Markets, Commodities, and financial markets. All while those at the top are absolutely totally oblivious that the bubble even exists. 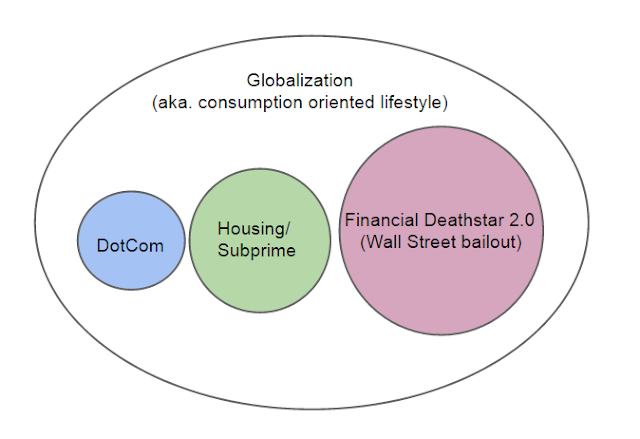 What is needed to "fix" all of this is for all of the Harvard Econo-Dunces to live on $1/hour.

All of a sudden their genius ideas won't seem so smart anymore.

Fortunately, that time has arrived, blatantly announced last week via Dow futures crashing limit down 1000 points in 8 hours. Taken as the latest fantastic buying opportunity by the Idiocracy.

No one is going to think anything more about Harvard after this, other than being a factory for clueless fucktards.