Which Stocks Should I Buy in a Collapse? 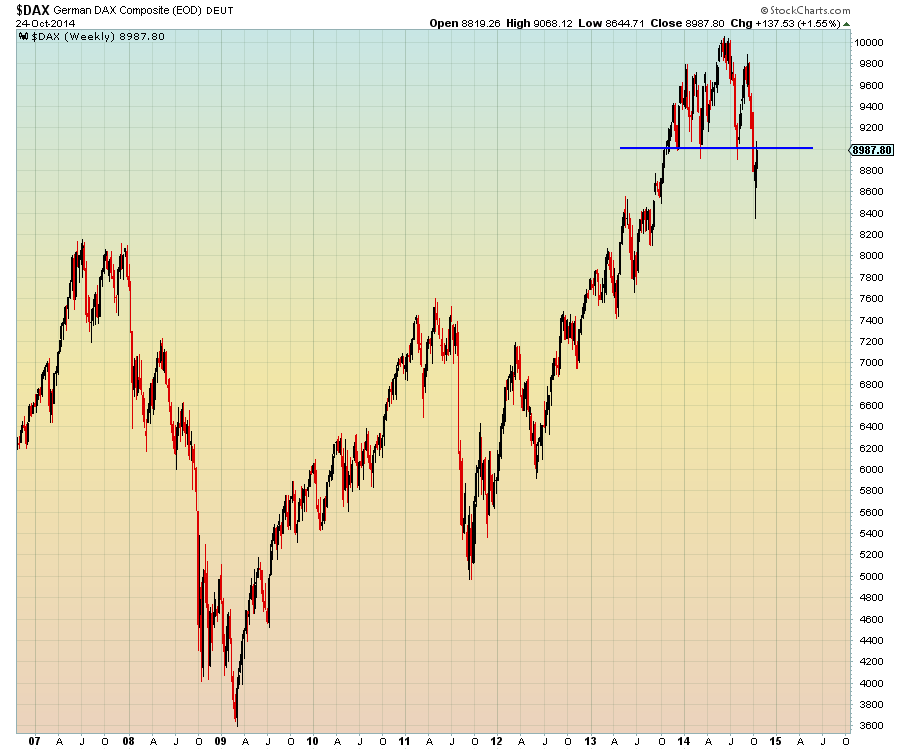 If you were conned into believing that all of this will go on forever, then you've come to the wrong place...

The HALO Crash Scenario
The stock market is a fictional illusion propagated by HFT Bots using borrowed money
The vertical crash scenario is predicated upon the fact that the underpinnings of the market have been systematically eroded by Central Banks and HFT Bots and are now essentially non-existent. As we found out last week, sellers lurk below this market. If last week was the bottom of wave 1 down and this week is the second wave retracement, then the third and most devastating wave is still ahead of us. Granted, the concept of a straight down crash, is statistically remote, given that it has never occurred before in history (as far as I know).

However, it's also the least expected scenario. As reported by Zerohedge, shorted stocks had their best two weeks in 15 months. If a crash was expected, they would not have covered. Another leg of the stool has been removed.

"Hedging is so 2012"
Why hedge when the Fed is always there with the bailout? 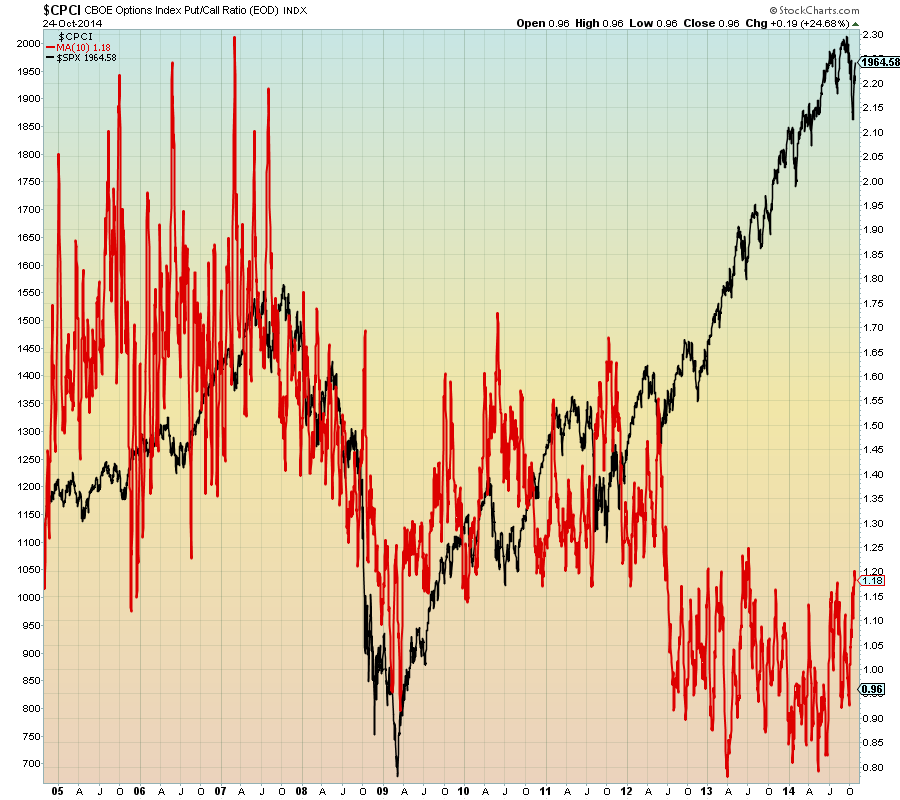 The dip was bought with both hands. Crash is still in play
Dow Weekly
The key point is that the downtrend line has not been broken at this juncture. In 2007 by contrast, there was a slow drip lower and then the acceleration phase occurred a year later in 2008. 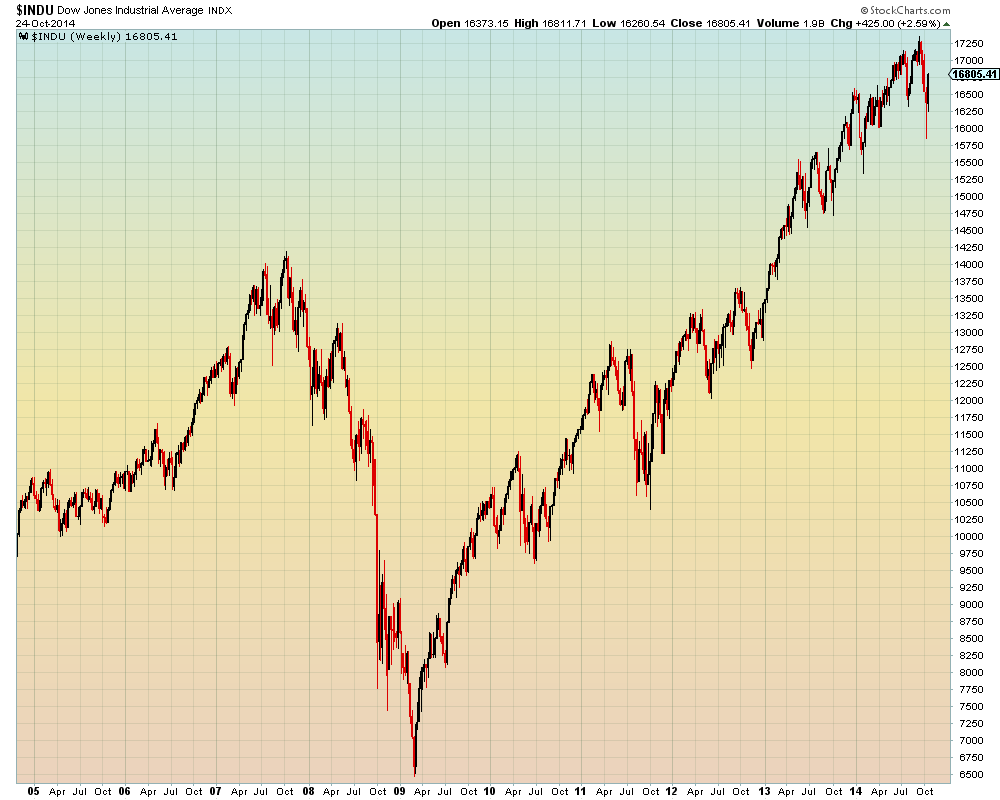 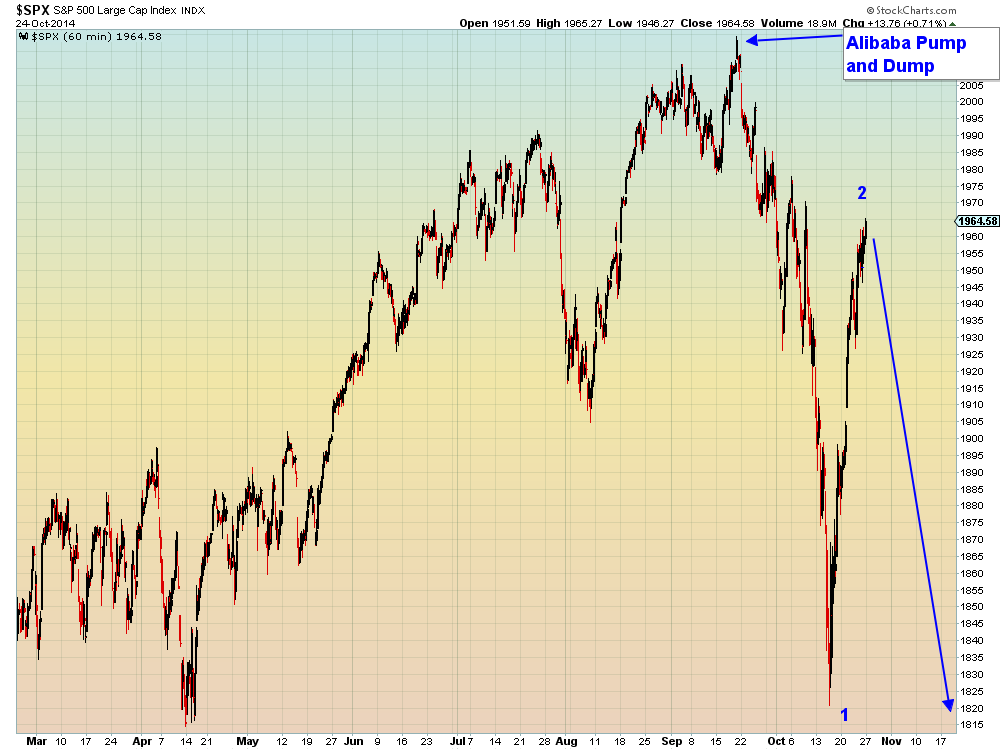 Dow Transports
As though last week never even happened 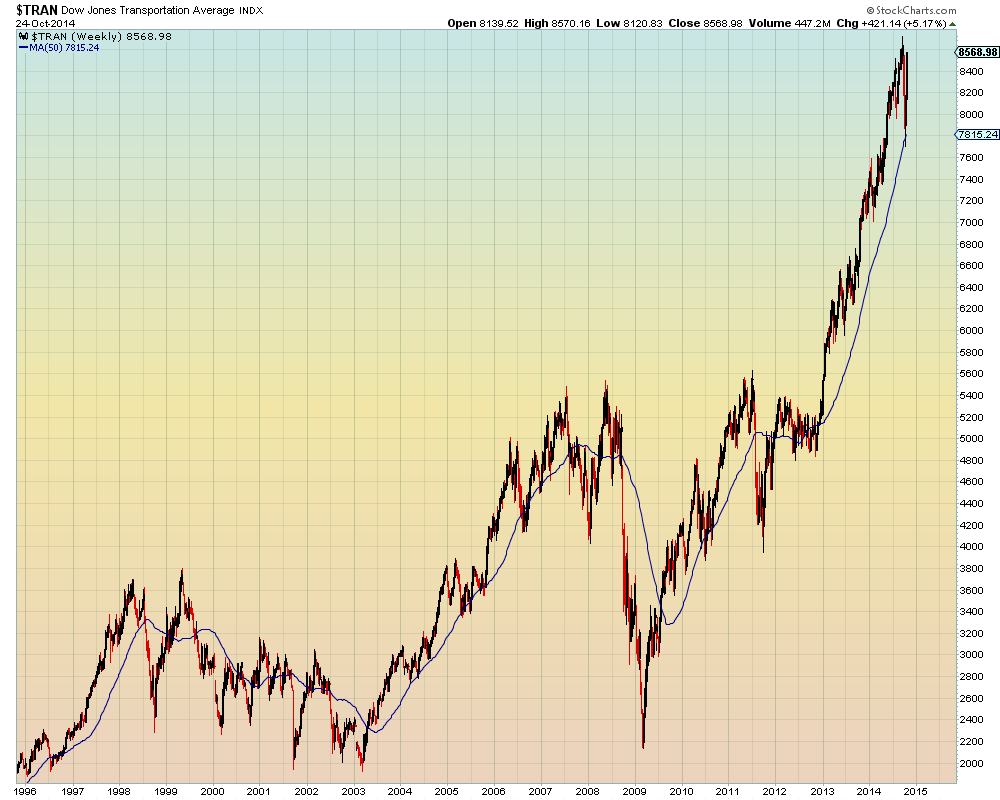 The technical underpinnings of this market have been systematically eroded
The damage can still be seen in the Nasdaq where only 33% of stocks are above their 200 DMA. We've never seen this large a divergence before: 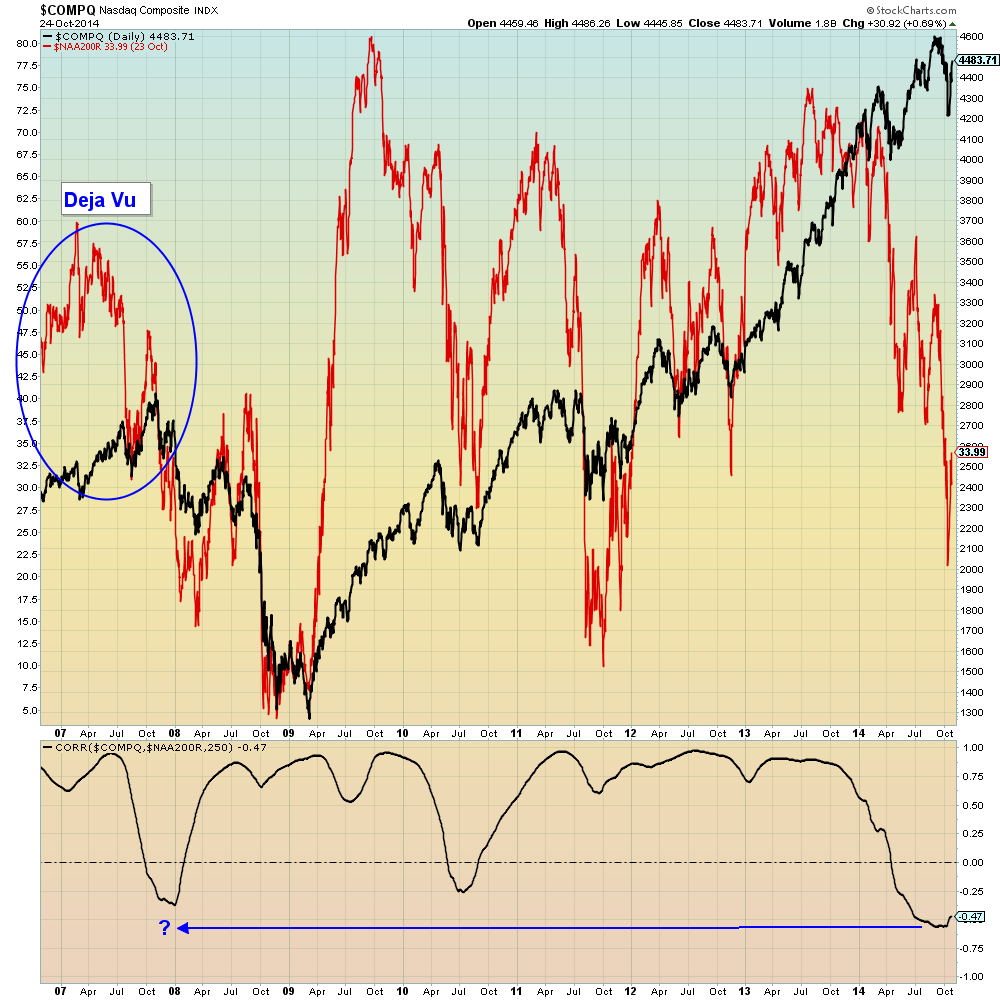 BTFD:
Down volume / Up volume: 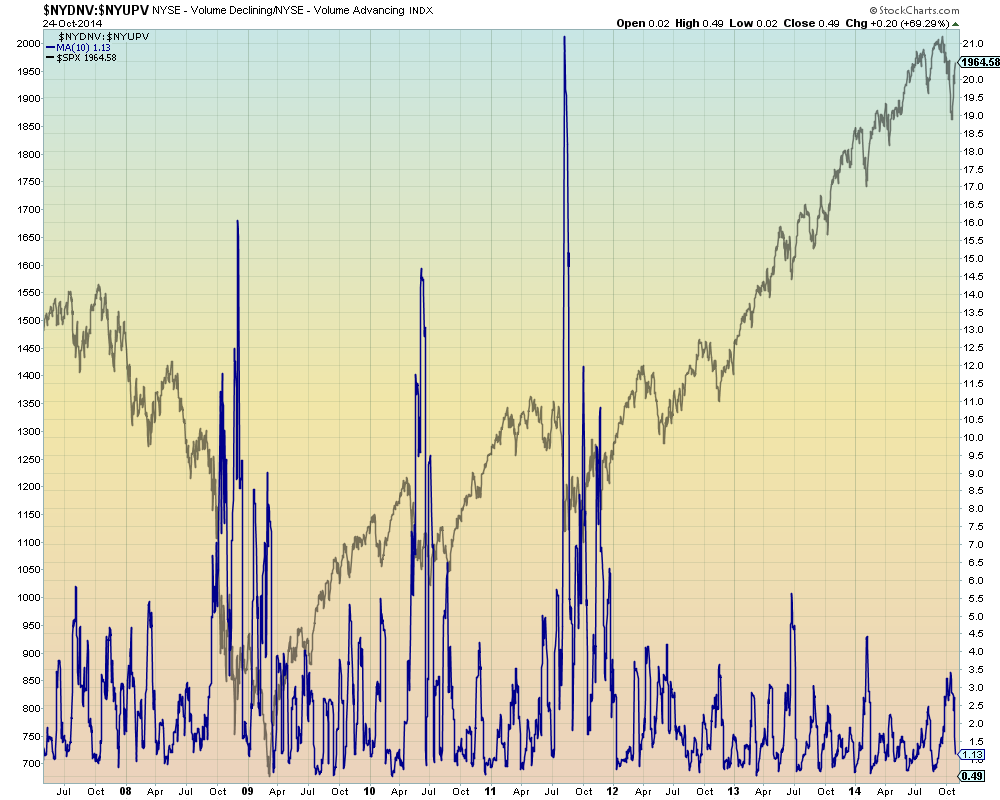 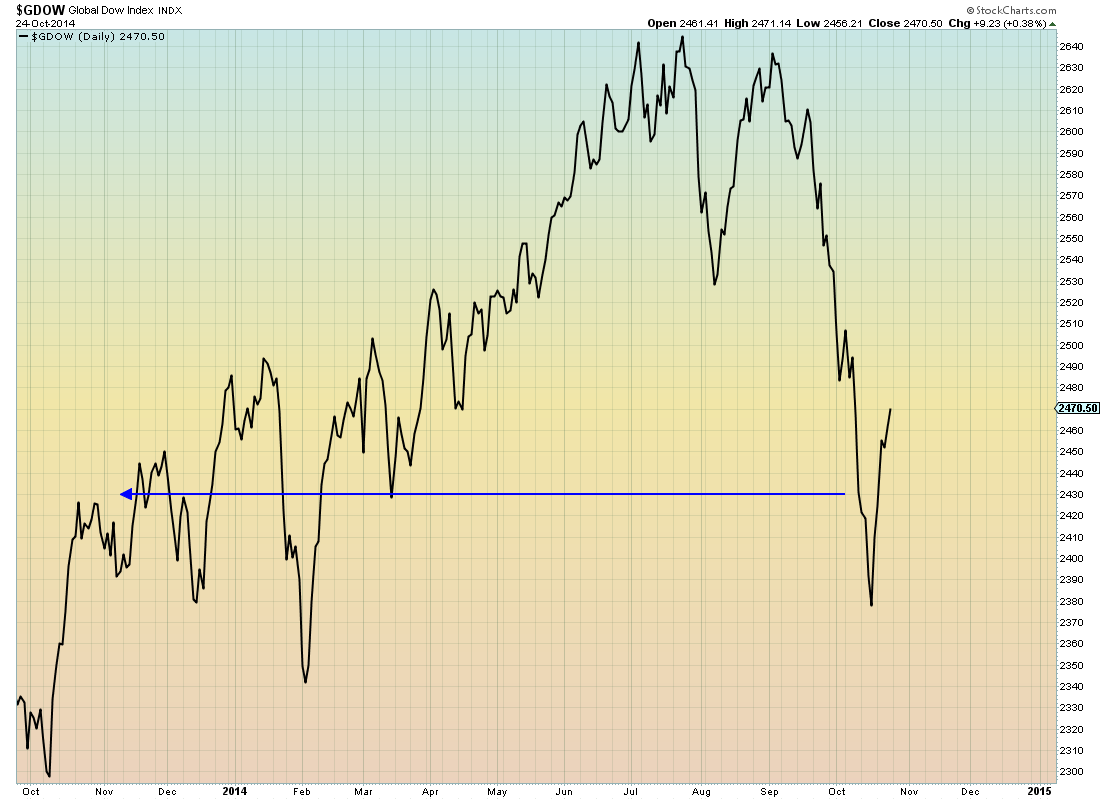 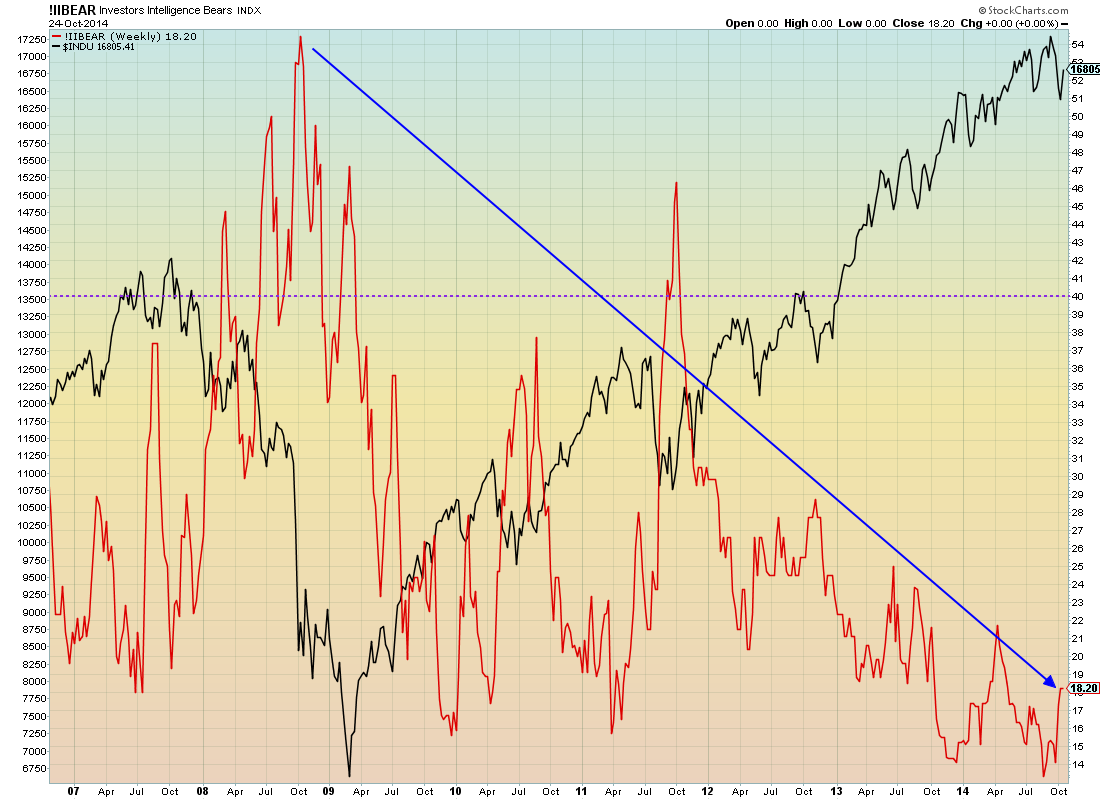 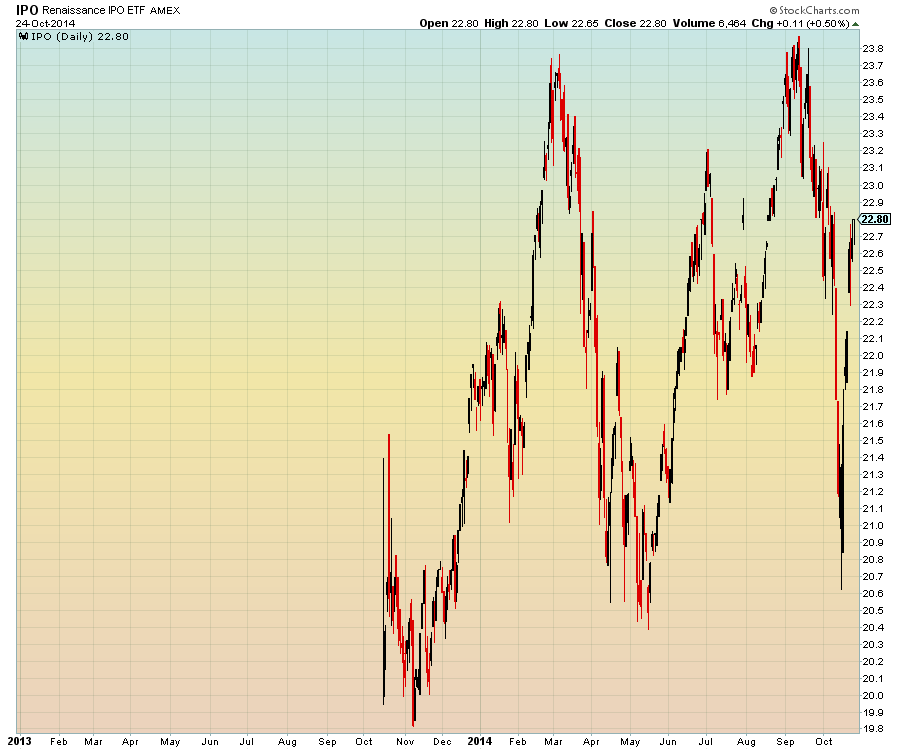 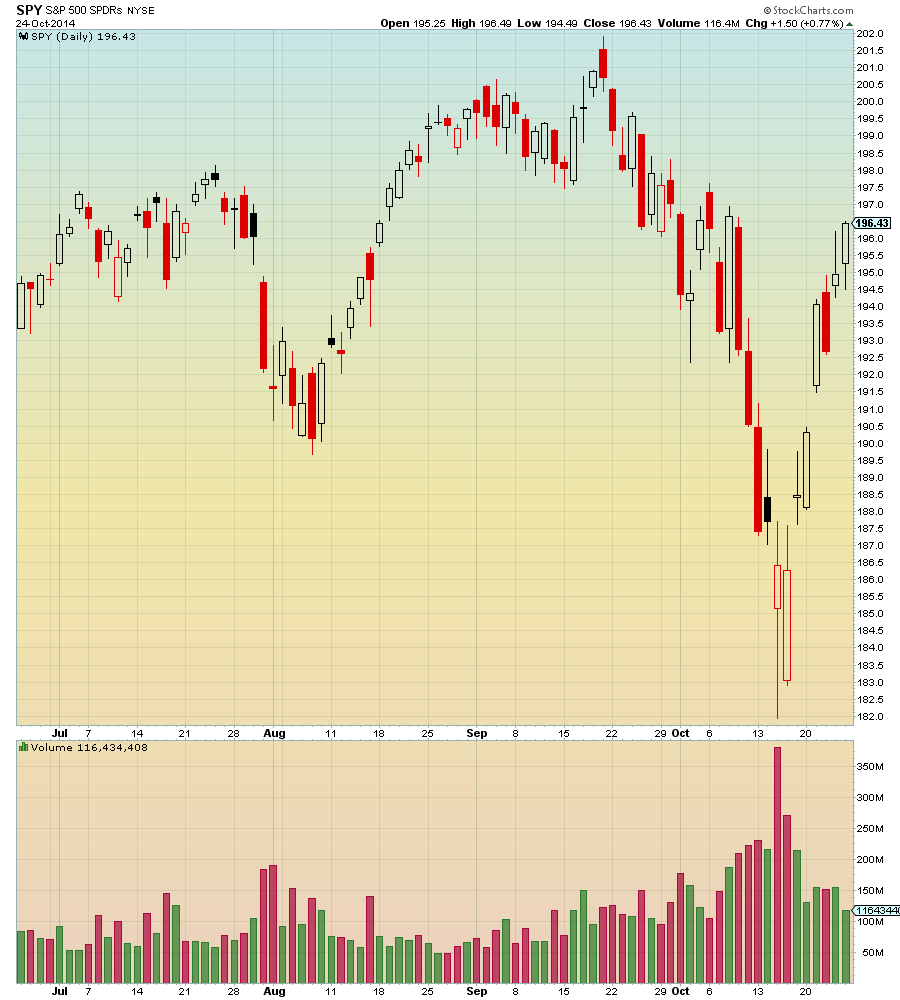 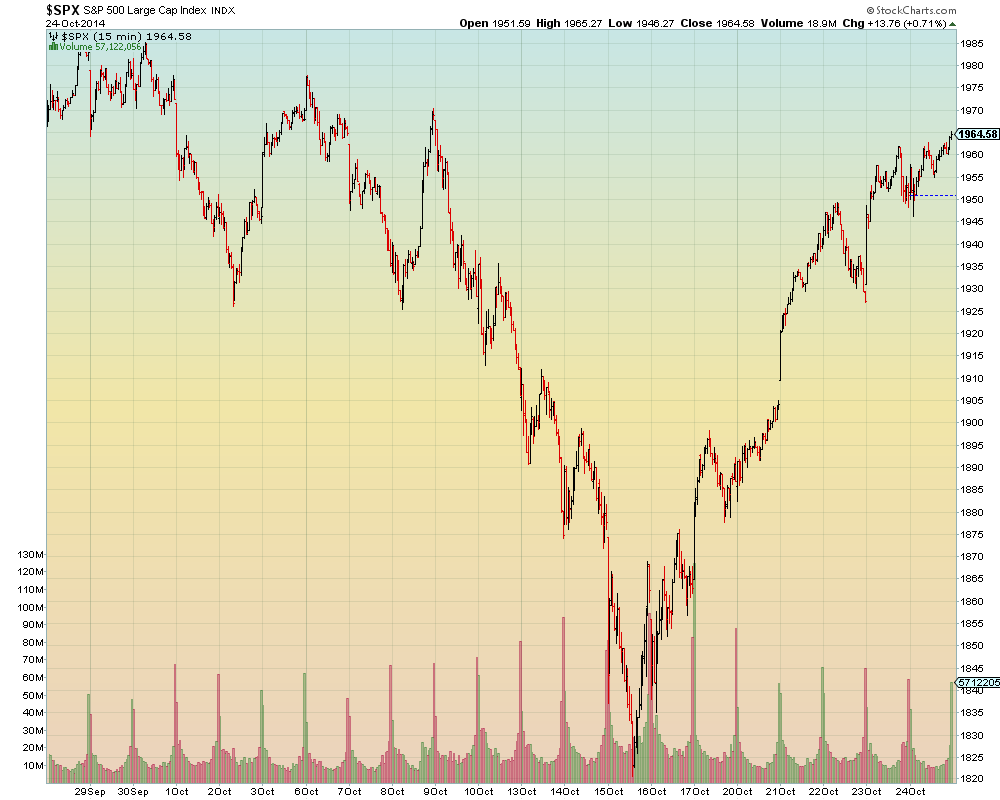 Despite the carnage, recent leaders went parabolic this week
Biotech
These gaps are not bullish, they indicate panic buying that will be reversed
Again, we see attenuation in timescale 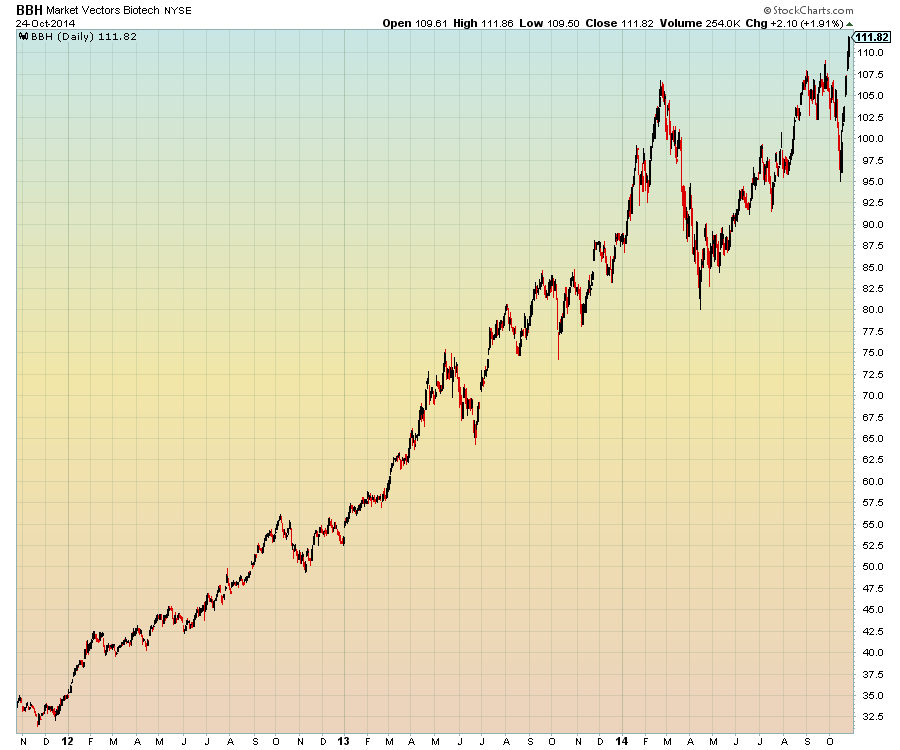 As we would expect in any recessionary environment, Utilities peaked last (i.e. this week):
No other major sector made a new high this week (except Biotech) 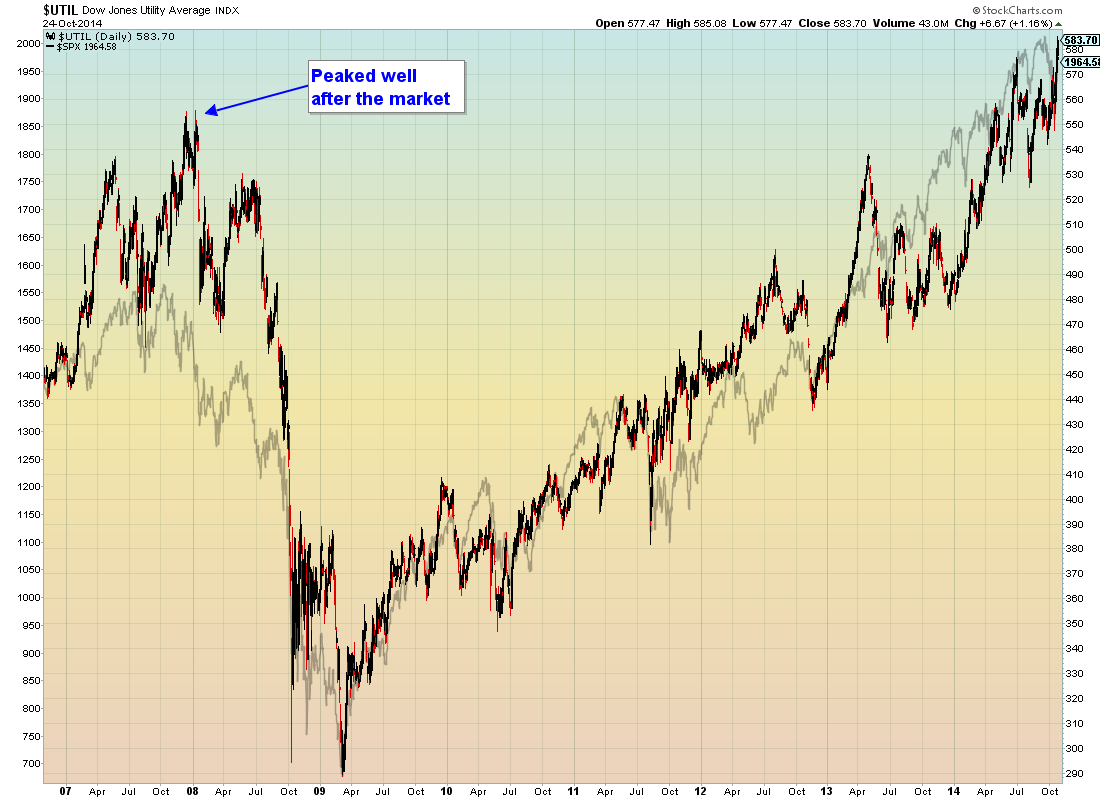 Skynet broke almost every day this week as reported by ZeroHedge: Liquidity is back at record lows.

Economic Fundamentals:
The global Ponzi economy continues to slow. China's growth rate is the slowest since the Lehman crisis and their housing market is turning negative.

Q: Can the Fed stop a crash from occurring?
A: Short-term possibly. Indefinitely, no - they didn't stop Lehman.

The 1929 Scenario
If this next leg down is not the liquidation phase, then that sets up the 1929 bounce, rally, collapse scenario, which is Daneric's count:

FYI: this is the Global Dow:
http://danericselliottwaves.blogspot.com/2014/10/elliott-wave-update-23-october-2014.html 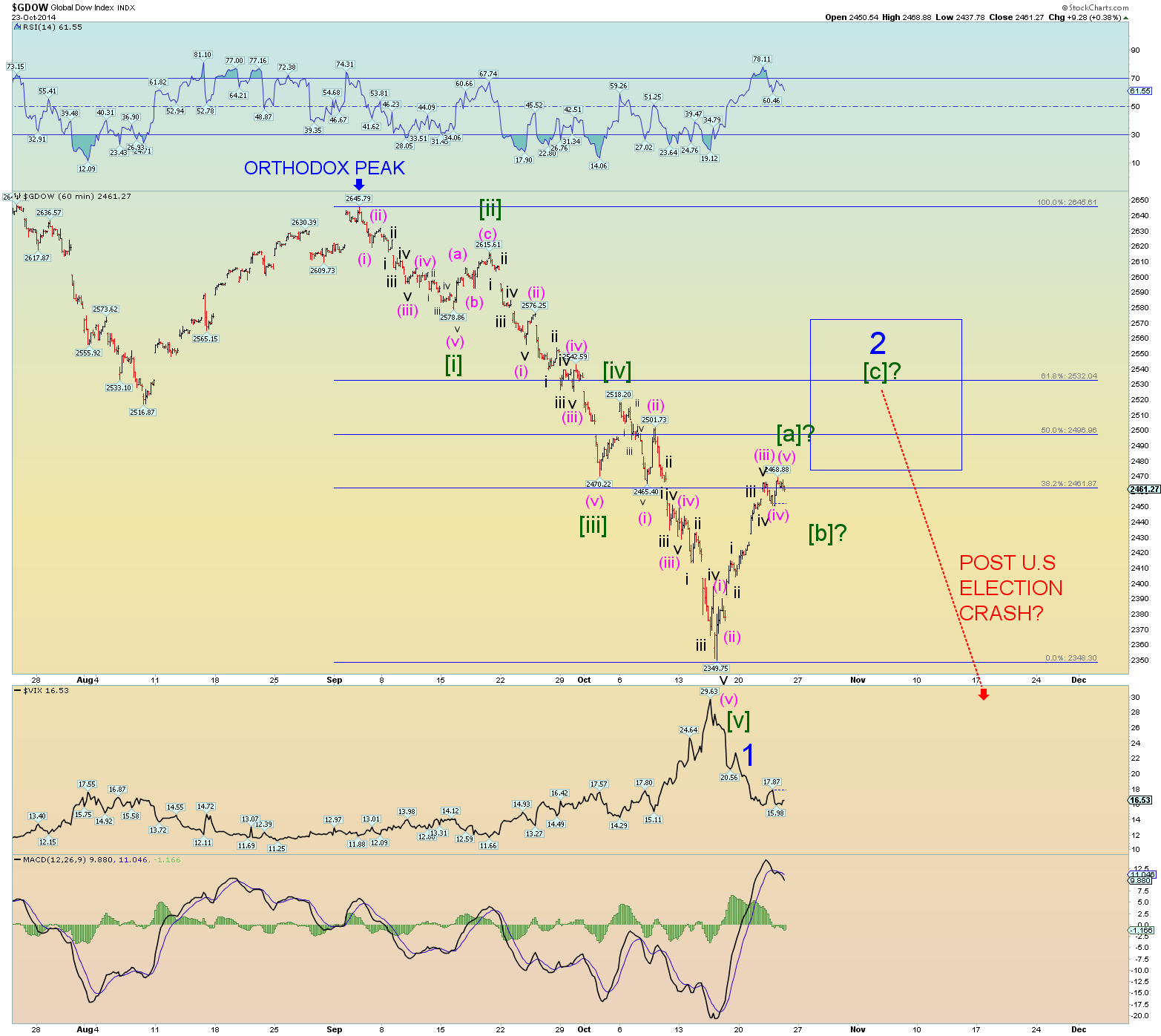