A: An Alzheimer's-ridden chimp acting as President, and the morons who elected him...

The specious narrative of the day is that Central Banksters, acting independently, have created all of the malincentives leading to serial asset bubble inflation. However, we know that's not the case, because there is no way that interest rates could fall from 18% to 0% over 30+ years without the prevailing existence of pervasive wage deflation. In Bernankenstein's terms, the wage deflation and resulting low interest rates was a result of a global "savings glut", presumably generated by Third World children working in medieval factories for 50 cents per hour. Why not fully capitalize on such an opportunity by lowering interest rates to 0% ?

First, some definitions:
Econo-Dunce: A textbook reader/writer who will ultimately be bankrupted and terminally unemployed by his own specious theories

1980 Indeed:
The answer to the above question: The CPI (red line) broke lower when net exports collapsed vis-a-vis Supply Side Ponzinomics and the systematic elimination of  "structural rigidities" aka. protections for the middle class - tariffs, competitive minimum wage, unions etc. 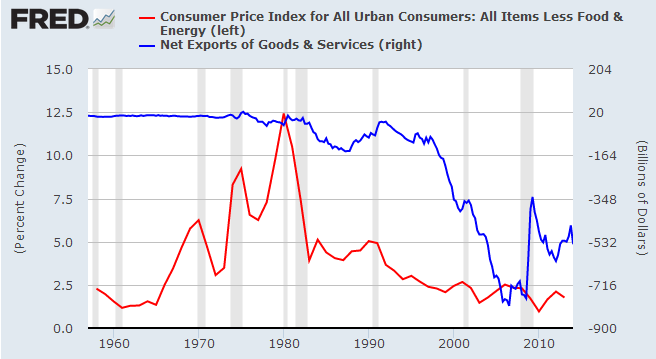 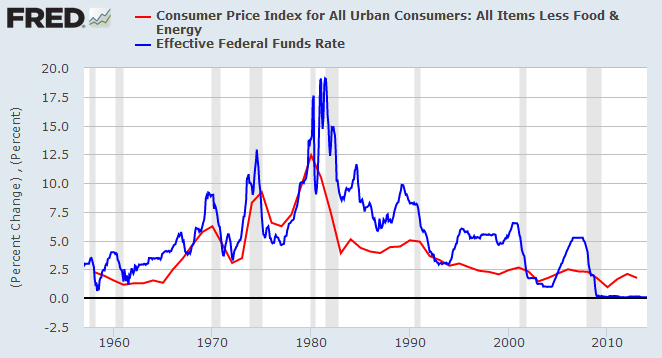 Balance of Payments: Capital Account = Current Account
"the overall BOP accounts will always balance when all types of payments are included"
A trade deficit such as the one shown in the first chart above implies increased borrowing by an equal amount. The wake up call that the consumption-oriented lifestyle was no longer sustainable first came in the 1970s. Policy-makers' response was to ignore the warning and instead throw open the doors to Third World imports and commence a multi-decade borrowing spree to prop up jobless "consumers" with the resulting cheap debt.

Q: Is a CPI (inflation rate) of 12% sustainable?
A: Clearly not, however, that was primarily due to the over-expansion of the money supply during the 1970s

Suffice to say, we can debate all day whether or not a developed country can or should attempt to compete directly with Third World nations. However, there is another overriding factor at play known as arbitrage that gave lie to modern economics' specious theory of "comparative advantage" i.e. "every country specializes in what they do best, and everybody gets to keep their job".

Finance 101: Arbitrage for frat boys and other assorted morons
The iron rule of arbitrage indicates that buying in one locale and selling in another locale, while applying adequate leverage (is $150 trillion enough?), will equalize prices (aka. wages) between markets. In the context of a Third World containing limitless amounts of cheap labour, the equalization will be lower.

The elevator is still waiting.