When the Music's Over

By ignoring 2008 and all subsequent risk, the Idiocracy has opted for the most abrupt and devastating ending to this clusterfuck. Despite insane risks, just today consumer sentiment came in at the highest level in 9 months. The underlying reason these zombies are "blind" to blatantly obvious risk is because the entire Developed World has devolved into history's largest morally void refugee camp, populated by consumption addicts incapable of seeing beyond their own immediate self gratification. These oblivious zombies have become human call options now ALL IN on the Globalized Ponzi Scheme, betting that there will always be Third World factory slaves at the ready to make their latest iGadgets. These human call options are in no way prepared for or capable of accepting less, so when they are once again proven disastrously wrong, it's going to get fucking ugly in a hurry. They will have nothing left to lose...


Goodbye To All That
At this late juncture, all of these types of blogs are starting to morph together with a very similar message - the status quo is ending and it will be a cataclysmic event. It's a toxic confluence of factors all coming to a head at the same time - the inevitable consequence of a society that ignores every problem until the last minute, and then a while longer. As much as the theme of my blog has been anti-globalization, the underlying secondary theme is really one of personal survival. We all have varying levels of personal risk related to the status quo. Unless you're someone living in a shack on Antarctica we all have exposure to the status quo, offset to some extent by our own personal "hedging" (aka. survival) strategies.

We Are The Lucky Ones
Still, I can't help but thinking that we are the lucky ones. We've had five full years to prepare for the meltdown. Had the final collapse occurred in 2008, most of us would have been far less prepared. As documented on this blog, circa 2007, I saw the Lehman meltdown coming all the way, yet still the last five years has been an absolute gift, mentally, emotionally, psychologically and financially.

Human Call Options
But these fucking zombies are going to be a serious problem. They have morphed into human call options who've made a one-way bet on the status quo without any backup plan whatsoever. They squandered these past five years by becoming even more buried in debt and more leveraged to the status quo. In taking the path of ignoring 2008, this society has decided to take the most cataclysmic approach possible to ending the Globalized Ponzi Scheme. It could have been wound down somewhat orderly over years or decades, but this kamikaze approach of levitating the bubble to obscene unprecedented levels in every direction possible, merely ensures an extremely abrupt and violent ending. So when these zombies are essentially catapulted into the brick wall of reality at a thousand miles an hour, and this entire shit show comes to an instantaneous halt, then all hell will break loose.

Life Without SUVs, Shopping Sprees, McMansions and Soccer Tournaments is Unthinkable
It's very telling how this society raced away from the scene of the crime in 2008. There was no accountability and no retribution, it was a mad dash away from the disaster with no looking back and zero consideration for how to prevent it from happening again in the future. The Idiocracy gazed into the abyss and saw life without accoutrements and decided that it was not worth living. That's what makes them dangerous, they are not capable of living with LESS.

This is where the real advantage of the past five years comes into play. We've seen this ending ahead of time, therefore we won't be surprised when it does end. When the zombies realize that they were conned again by the exact same game show hosts, billionaires, frat boys and Central Banksters who conned them last time, then of course, there will be those all around us who are engulfed in their own uncontrollable rage. Fortunately, violent rage is like the Ebola virus, it's extremely virulent and deadly, but it has a habit of burning itself out rather quickly. There's something about violent people running around killing each other that tends to thin the ranks of these types of people.

Last Man Standing: The Age of Dumbfucks is Ending
This era has cultivated legions of dumbfucks, many at the top of the Ponzi Scheme, who have zero survival skills and are already acting like self-absorbed refugees while the bubble is still inflated. Suffice to say, the world isn't going to get any better until these people are "resolved" either by miraculously morphing into real human beings or by merely expiring early like worthless call options. Either way, this is a war of attrition and there is nothing we can do to "fix" these people that they won't do to themselves. My strategy is to shelter in place. For better or worse, we will be the inheritors of the New World Order, with an all critical five year headstart, as compared to zombies who are already collapsing even before the race begins.

The only concern right now is finding one Malaysian Airliner, missing for almost two months now. 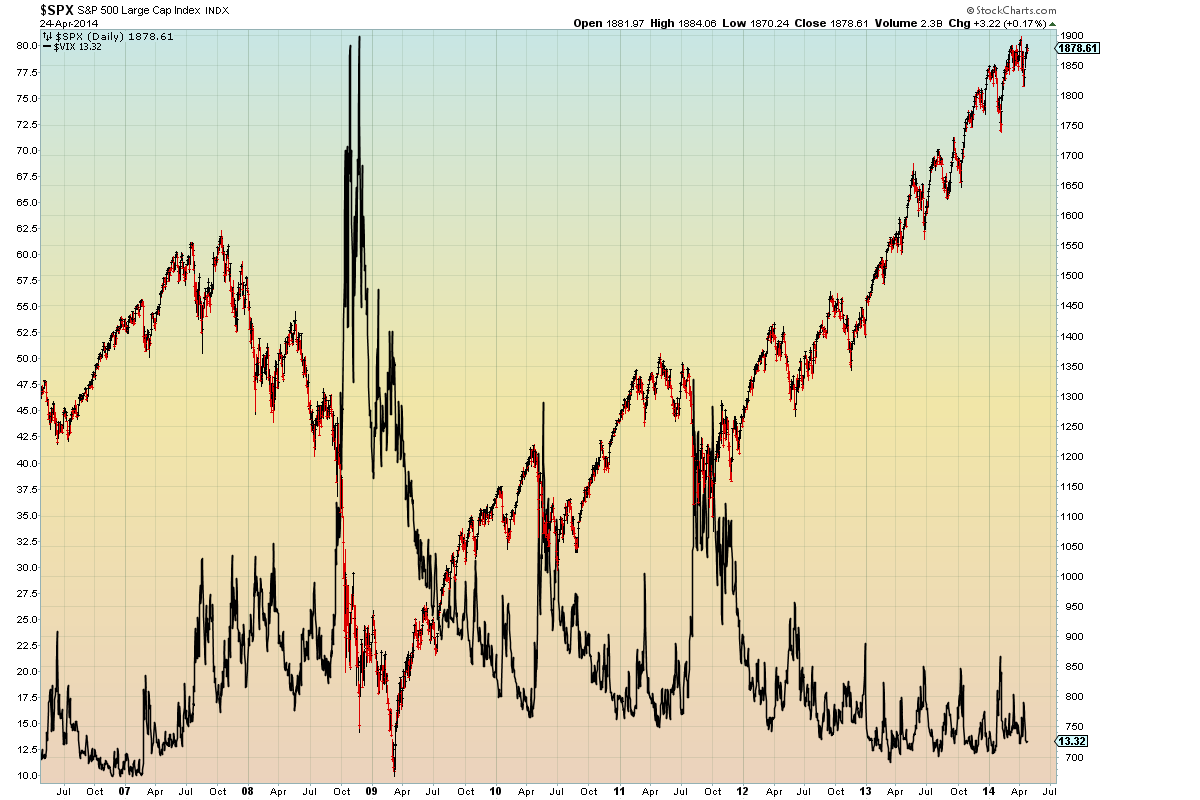 Jobless "consumers" are confident they can get away with bankrupting the grandchildren
Just today, the index hit a 9 month high
Clearly not as confident as they were in Y2K and 2007
U. Michigan Consumer Confidence, with the Almighty Dow Casino 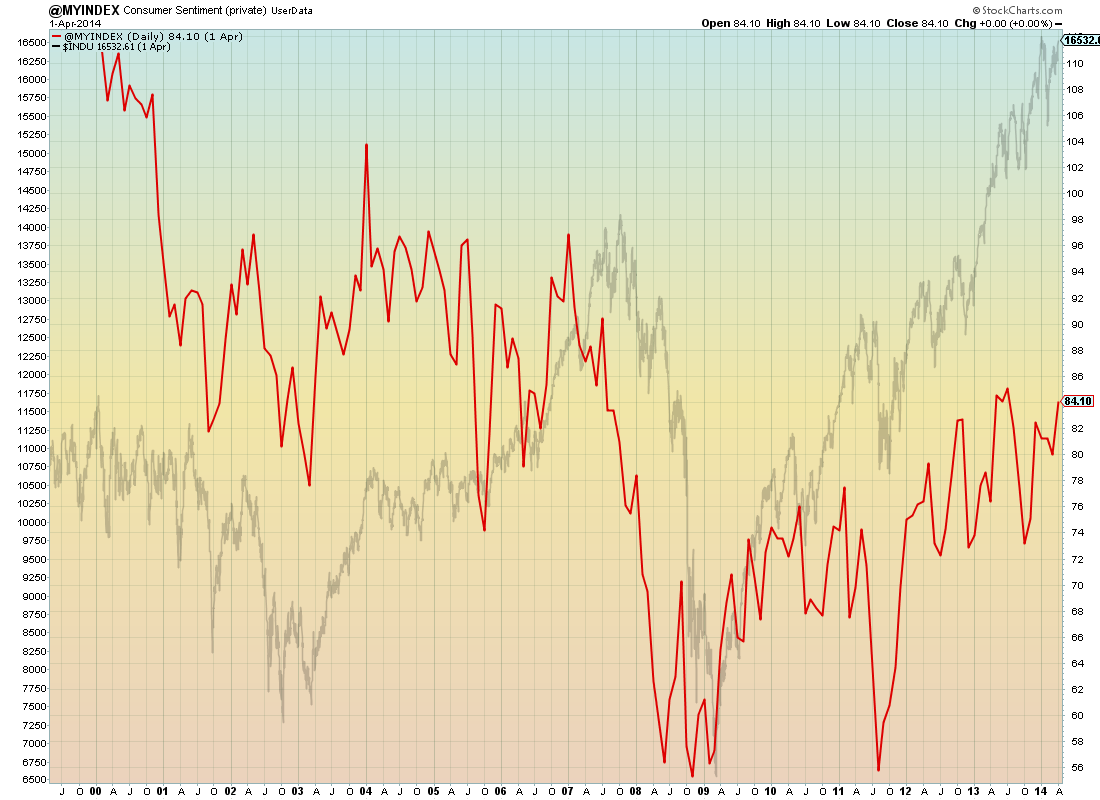