Welcome to the Hotel California

Getting into an asset bubble is the easy part. For the vast majority, getting out before it implodes is the impossible part...


There have been countless asset pump and dumps in the past 15 years. Here is a brief summary of the bubbles just in these past five years:

Coming out of 2009, it took a while for the "animal spirits" to reinvigorate, but by 2011, the demand for all things gold and silver was running hot and heavy. The dollar was going to crash any day now, so speculators needed protection from dollar collapse. Predictions of gold going to $4,000 or higher were commonplace: 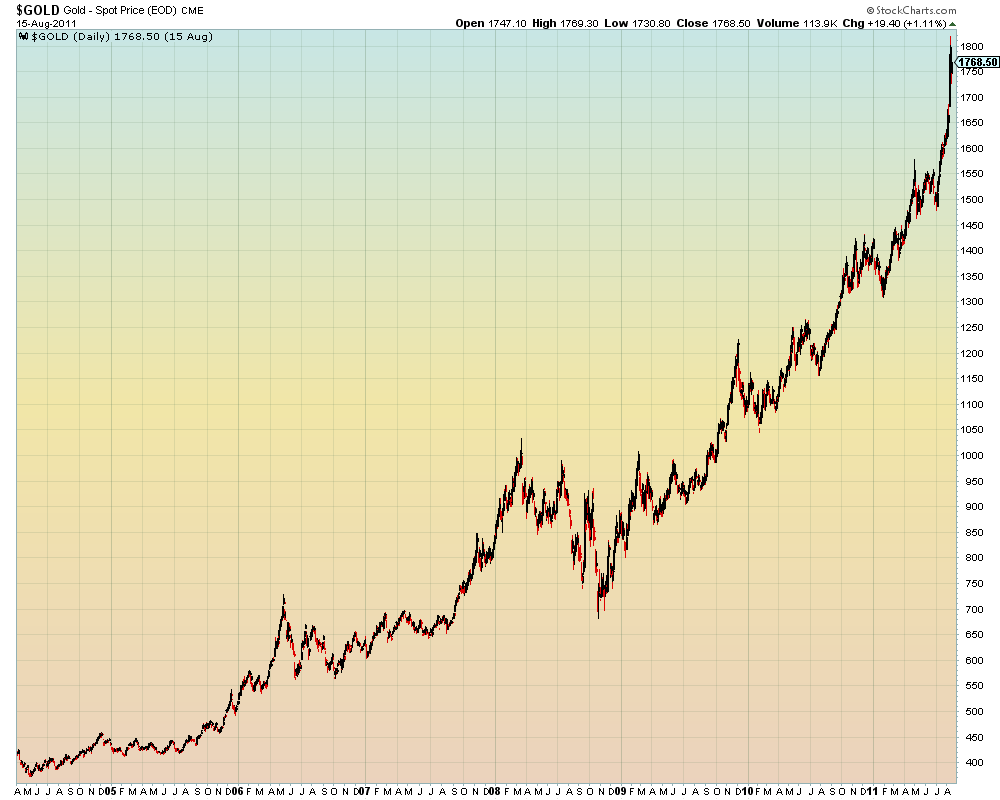 And of course, just as sentiment peaked, so did gold and silver. This article I dug up from December 2012, said that a prediction of gold falling to $1,200 per ounce in 2013 was "outrageous". 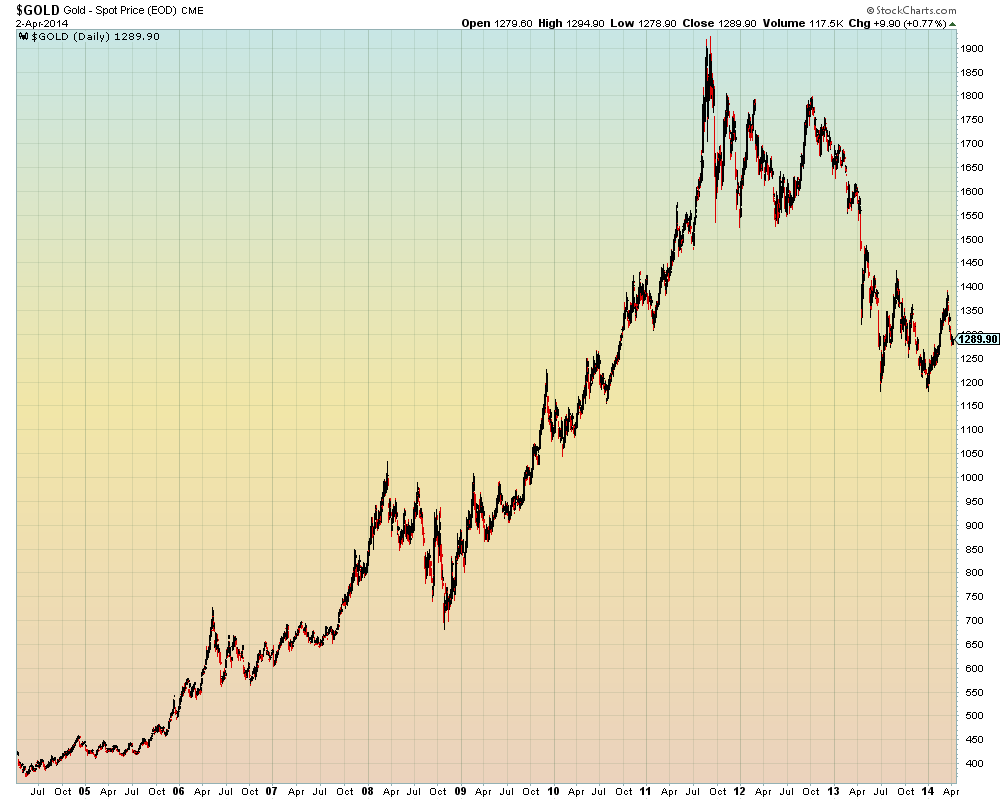 Fast forward to 2012, now that gold was tanking, speculators needed a new play toy so they went after Apple. Even though Steve Jobs passed away in October 2011, that was just the beginning of a one year parabolic run towards the launch of IPhoney 5: 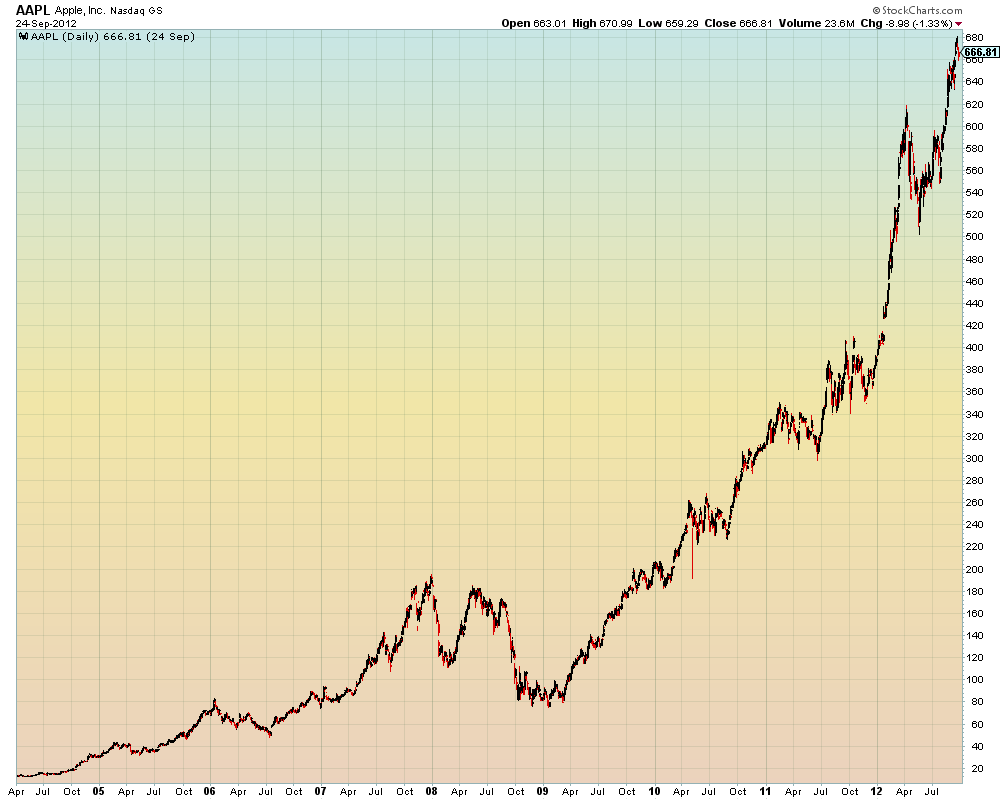 And, then of course, iPhone 5 was only "one" better than iPhone 4, so it was a major disappointment and the stock tanked - now in a-b-c retracement back into no man's land: 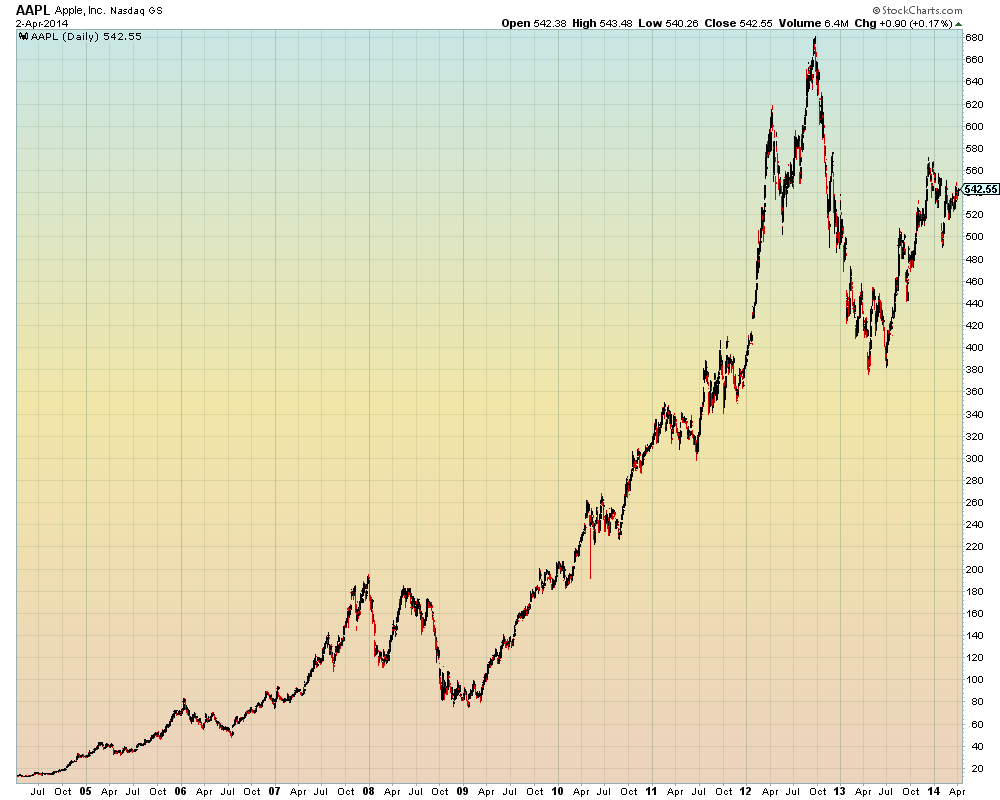 Fast forward to 2013, and here comes BitCasino. The dollar was going to crash any day now, so speculators needed protection from dollar collapse. Sounds familiar. The rate of return on this thing was astronomical, making gold and apple look like t-bills by comparison. Depending upon when they bought the thing some people had over a million percent return.

Here it is going parabolic and by this time it had only crashed twice by 90%, protecting its owners from certain boredom in dollars: 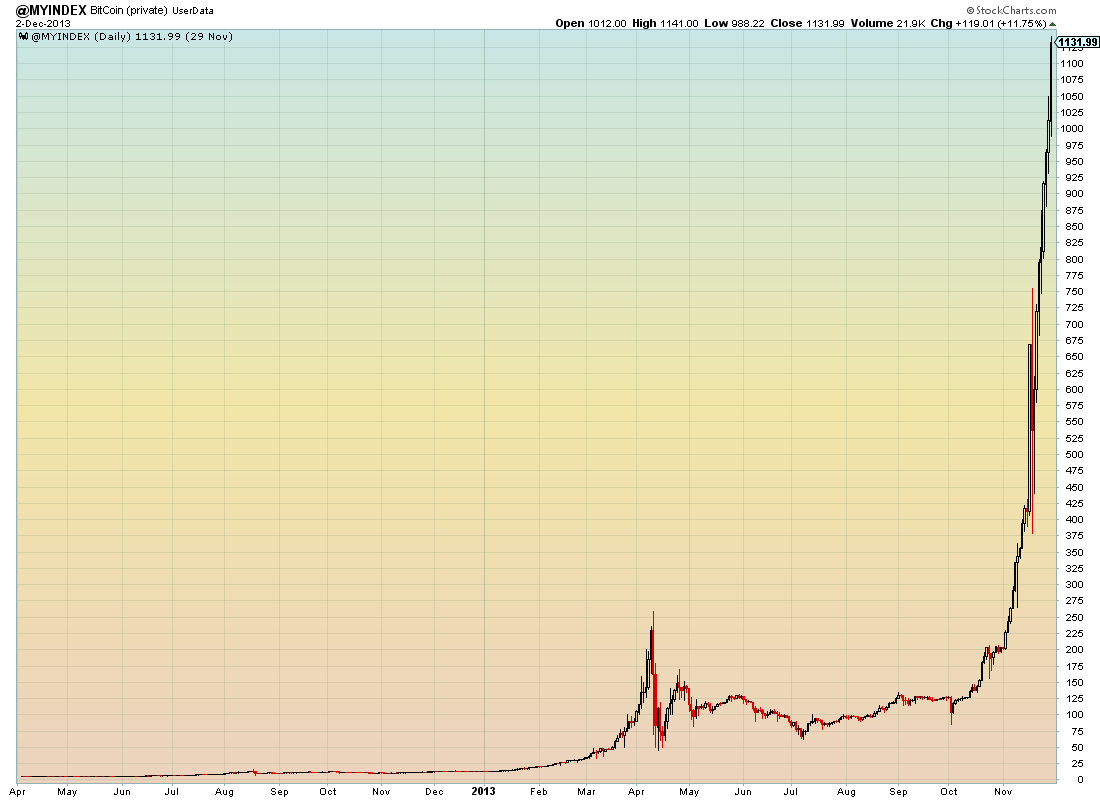 And then, well you know. This is a chart of the BitCoin that still exists. One of these things vanished off the face of the fucking earth aka. "MtGox"

BitStamp - showing us where the Dow is headed. 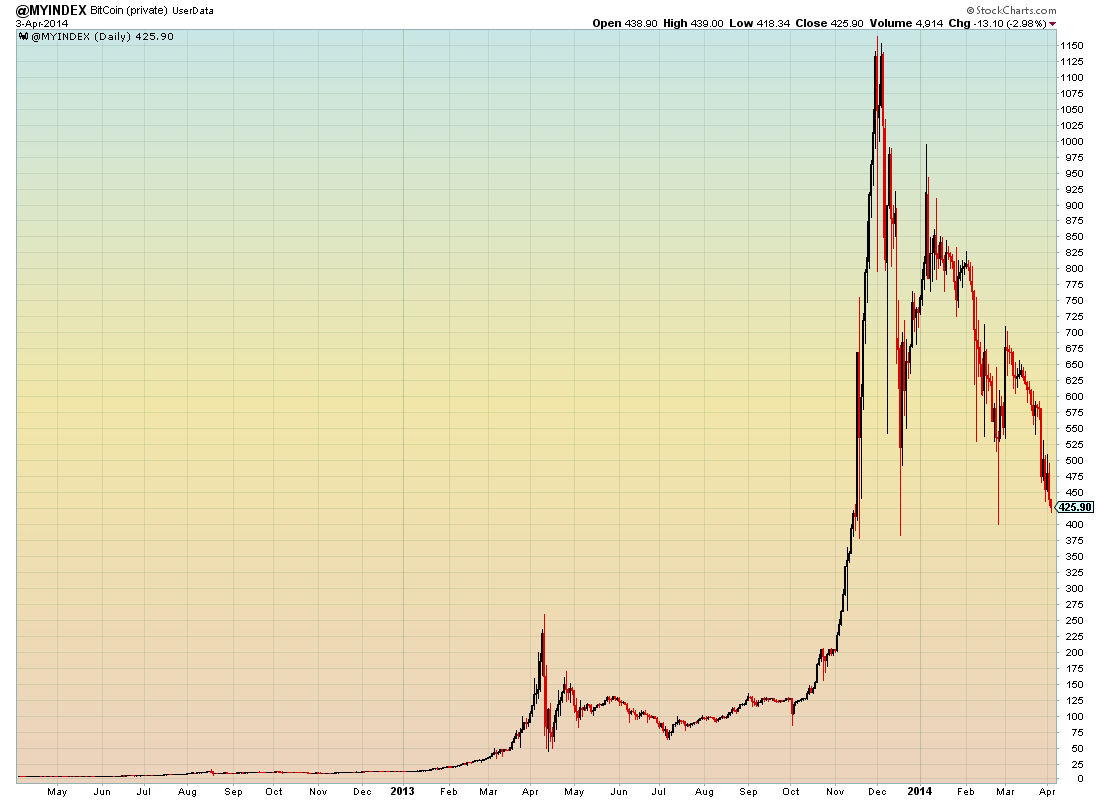 A Market that Never Goes Down: Sounds Familiar
Now onto 2014. Here we are, Wall Street is pumping out junk IPOs at the highest rate in 15 years; Chinese internet stocks and penny stocks are going bonkers, and the U.S. stock market is plowing ahead non-stop. I think we all see where this is heading. The divergence between the underlying economy and the stock market is wider than it's been at any time in U.S. history. Every risk factor known to man is off the charts right now (margin debt, insider selling, sentiment, correlation, complacency etc. etc.). So this is by far the biggest asset bubble we've ever seen in our lifetimes, without any comparison. And yet its collapse will somehow still catch the vast majority by surprise. It's totally fucking unbelievable.

Copper and Stocks
One of these is right about the true state of the economy. The other one, not so much: 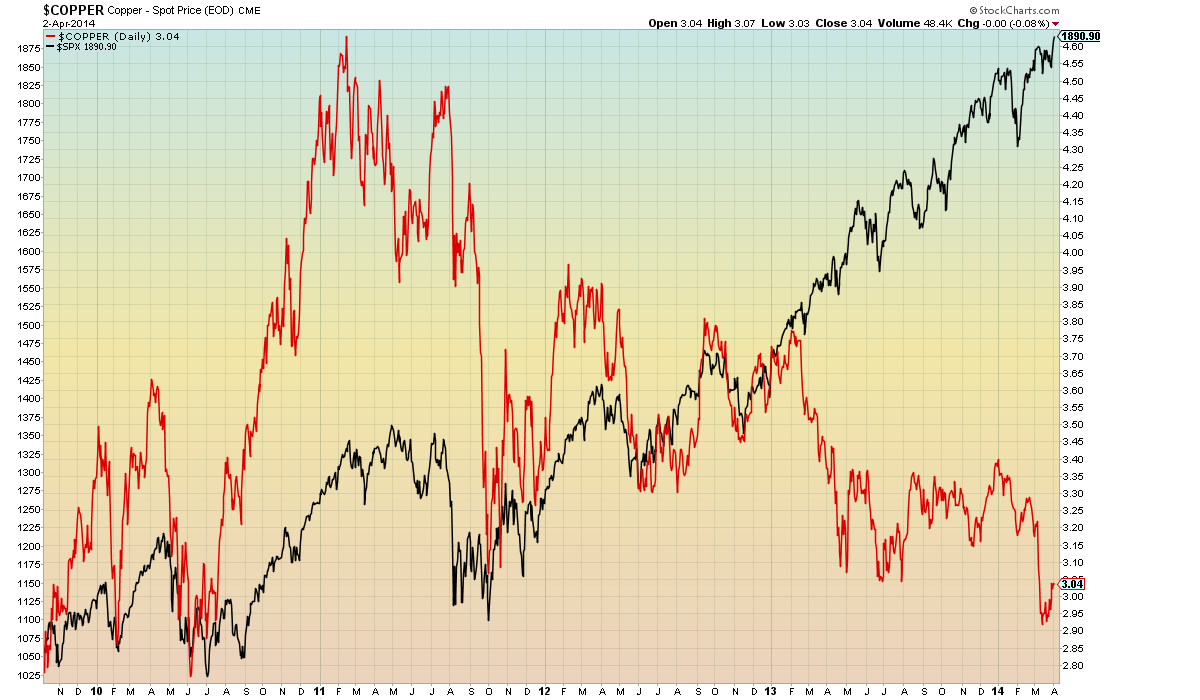 The Faustian Assumption: "It Can't Happen to Me"
Post-2008, off of the 666 bottom in the S&P, Billionaires and Baby Boomers wanted their money back AT ALL COSTS, no questions asked, and they got it back, no questions asked. But there was no guarantee for what happens after that. It will all be OK as long as no one tries to sell, because this Hotel California has no exit. They squandered their childrens' future betting on "double or dog food", never once considering that they could end up with "double AND dog food".

"to salute as happy one that is still in the midst of life and hazard, we think as little safe and conclusive as to crown and proclaim as victorious the wrestler that is yet in the ring" 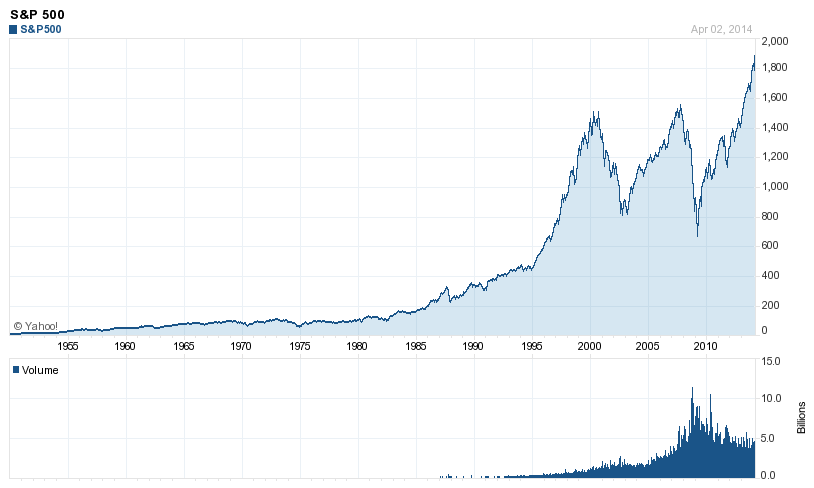