When Bernankenstein & Co. were running to and fro after Lehman trying to put Humpty Dumpty together again, apparently it never occurred to those geniuses that they were not addressing the real problem, they were only addressing the symptom of the problem. Subprime, McMansions and 1% "Patriot Loans" were only props to keep the Globalization bubble inflated for a few...years...longer...Therefore, by saving the status quo, all they did was give the stoned masses a longer rope to wrap around their neck...

If At First You Don't Succeed
Ponzi Bonds, 0% Interest Rates, Money Printing and $25 Trillion in Leverage for Speculators Are The New Subprime
When assessing the imbalanced Ponzi Scheme that has resulted from the global system of trade, it's tempting to blame the concept of "Globalization". Which implies that wealthier nations were incapable of trading with less wealthy nations without turning them into slaves. Of course, it didn't have to be that way. Globalization could have lifted all of humanity from poverty, yet in the event it has done quite the opposite. Placed in the hands of corrupt frat boys and billionaires, the temptation to arbitrage the difference between Third World and First World labour was too great to resist. Therefore, they turned Globalization into a zero sum game by transforming developing countries into "supply" and developed countries into "demand" and monetizing the difference, leaving only a pile of insolvent debt separating them. The developed world would be Third World right now if shut off from the ability to borrow and the "ability" to print money AND most importantly, if wages in the Third World were fairly equalized. This is something that everyone will find out the hard way, because, even at this late juncture, neither the "elites", the "educated", nor even the most exploited  up and down the Ponzi scheme - NO ONE wants to admit that it's a colossal failure. No one has the fucking balls to admit that this is all going to end. Life without SUVs and Kardashians is wholly unthinkable. And the developing nations, most pathetically they all continue to pretend that one day they too will have a seat at the big table, leaving aside the fact that the "big table" only exists at the expense of their degraded standard of living. A gradual convergence of standards of living between developed and developing nations, occurring over years and decades, would have made way too much sense, so now we're going to have this Big Bang approach of collapsing everyone's standard of living down to a Third World level, as Globalization - the largest bubble in human history - implodes.  Good idea.

As we all know, this is totally unfounded wishful delusion. China has embraced Globalization with unparalleled zeal, and yet as I wrote recently, that country has very little to show for it on a net basis. I highly doubt that the Chinese envisioned having an $.80 minimum wage 20 years after starting down the path of Globalization. 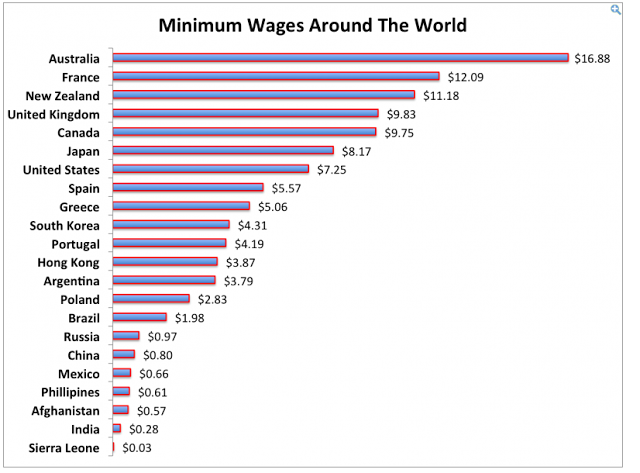 0% Interest rates are compliments of the Third World
Without imported (wage) deflation, money printing and 0% interest rates would have caused hyperinflation. But the masses at large never stop to ask how can money be *free*. Of course, nothing is free - in return, the Third World gets developed world jobs but at a fraction of the wage. Until it all collapses like a cheap fucking tent.
http://en.wikipedia.org/wiki/List_of_countries_by_GDP_(nominal)_per_capita
(G7 nations: U.S. Germany, UK, Canada, Italy, Japan, France) 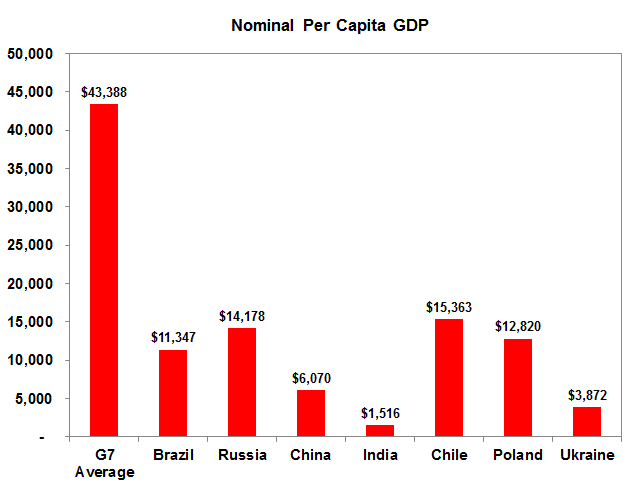 LATECOMERS ARE POUNDING SAND UP THEIR ASS
Despite two decades of catch-up, BRIC nation GDP is still a fraction of the G7 average. Another few lifetimes like this and we may actually get somewhere, assuming the environment hasn't been obliterated.

If you read Jeffrey Sachs' "The End of Poverty", he spends half the book discussing the miracle of Poland. Poland was the case study for the successful globalized nation. Flat taxes, low regulations, business friendly etc. Apparently being the star pupil of Supply Side Ponzinomics gets you GDP that is 29% of the G7 average.

The Chicago Boyz
Chile however, was the other superstar of Ponzinomics. That economy was run by and for Chicago Business School Supply Siders. The Great Milton Friedman himself advised Pinochet on the "right way" to run an economy. Naomi Klein spends half of her book "Shock Doctrine" reviewing the carnage. Still, one would think that having the world class model capitalist economy, they would have something more to show for it than GDP equating to a mere 35% of G7 average. The Chicago Boyz failed their own country spectacularly, and impoverished millions in the process.

I included Ukraine for reference as to how little gain the Eastern Bloc countries have made since 1990 and the fall of the Berlin Wall. Ukraine's per capita GDP equates to 9% of the G7 average.

There are those who would say that $3,872 goes a lot further in Ukraine than in Canada, which is true. However, that is because there are a lot more ultra low wage people working in the Ukraine who bolster the purchasing power of those living above the median income. It's extremely disingenuous to start rationalizing differences in GDP on the basis of things being "cheaper", without understanding the real reason why they are "cheaper".

Star of India
Star performer of IT outsourcing. Indian IT firms perform all of the jobs that used to be performed in developed nations, but at a fraction of the cost. Apparently no one had the courage to ask the very basic question as to why that's the case, and how long that situation will persist - as in forever.

Our "Baristas" make 10x China's minimum wage
To recap, we know these "developing" countries understand capitalism - several of them are more business friendly than the G7 nations. We know they are highly literate and in many cases have more PhDs per capita than the G7. We know they are capable of performing the same work, because they already are performing the exact same work.

Therefore, we are left to assume either that there is some cultural or ethnic inferiority OR the fucking model doesn't work. Fortunately for most of these countries above, there is no assumed cultural inferiority. Therefore, we are left to assume that the majority inside and outside of these countries still don't question the obvious fact that the model doesn't scale and it NEVER WILL.

The Cult of Superiority
However, if you take a place like Africa with all of its corruption and its despotism etc. the implicit assumption there is that they are backwards due to inherent cultural inferiorities. No one ever stops to ask the relevant question - if the star performers of Globalization above can't bootstrap themselves up to the big table, how the hell is any Third World country starting from a much lower standard of living ever going to make it?

It's unfounded racism. They never had a chance in the first place. The Ponzi deck was stacked against them.

All Ponzi Schemes Collapse With Extreme Dislocation
But here's the best part, a lot if not the vast majority, of developed world economists are going to get financially obliterated well before they acknowledge the fact that the Ponzi Globalized model doesn't scale. They will find out the hard way that they are by no means immune to poverty and that it's hard to get out of the ditch when you are face down with a boot across your neck.