Nickel and Dimed: On (Not) Getting By in America
One of my goals when I started this blog was to use it to vent my rage arising from the slave-based pseudo-economy, in what one would call a more "productive" fashion. However, every time I come across another clueless man-boy explaining why raising the minimum wage is a bad idea, despite the fact that income inequality is at a record high, I literally blow a fucking gasket.


State of the Disintegration
I just now realized that this is not a debate that can be resolved on blog pages or even really in the context of a political system that is totally fucked up beyond all recognition. When your nation's State of the Union address consists of being lied to for an hour followed by a standing ovation, then you've forfeited all right to be surprised by what happens next. The Idiocracy doesn't even bat an eye that the entire speech and rebuttal have to be fact-checked. It's just assumed that we are being lied to - business as usual. With respect to the economy, as long as we have people at the top of this economic Ponzi scheme who are willing to rationalize mass poverty and exploitation, then this pseudo-economy will only become further and further imbalanced in their favour:

1) A doubling in the defense budget since 2000 - no problem
2) Two interminable wars in the Middle East costing trillions - no problem
3) A tax cut for the ultra-wealthy who already hold untaxed trillions offshore - no problem
4) Allowing companies to send millions of jobs overseas - no problem
5) A massive bailout for Wall Street, burying the world economy - no problem
6) Expanding the Fed balance sheet by several trillion to inflate the stock market - no problem
7) CEOs who make every two months what the average person makes in a lifetime - no problem


But...
A minimum wage almost as high as it was in 1968
Foodstamps for those outsourced by the "elite"
Healthcare for children and workers without employer insurance

Full Retard
But of course, the real problem is by no means confined to the "elites". Without a populace willing and begging to be lied to constantly, none of this chicanery would be the least bit possible. We are literally now dealing with some of the dumbest fucking people who ever walked this planet. I just read this article: "Despite fiscal drag, the economy had a pretty good year" and I almost shit my pants. You see, the economy "grew" 2.7% during 2013 by "only" borrowing 4% of GDP and yet somehow that borrowing of the entire year's fake growth and then some, constitutes a "drag" on the economy? Well, we clearly should have borrowed 10% and had a really good economy. As the article states, we have this "terrible obsession with deficits", and we should get over our concern for future generations and just borrow them into oblivion. It gets even better, one of the first comments below the article reads like this:

"Obama may end up presiding over one of the most incredible bull markets EVER. Today was one of the most affirmative positive days I've seen in over 30 years of investing(astute investors know what I mean). I'm not happy with his skills at bring us together but I have to be honest. This is one heck of a bull market."

Doomed: As long as the Dow is going up, literally nothing else matters.

Level the Playing Field
Getting back to the original topic - minimum wage - even the kings of old were smart enough not to go all in against their own people. Today's so-called "elites" are as dumb as a fucking door knob and thoroughly decadent. They took their own self-interests to the logical extent possible and destroyed the real economy in the process. Forty years of monetary expansion generated the longest unnatural pseudo-expansion in human history and in the process allowed an accumulation of dunced frat boys and bad ideas to grow unchecked. Clearly - per the theme of this blog - this contrivance is in sudden death double overtime and we are way overdue to collapse the massively decayed remnants of this pseudo-economy that are sheltering these self-absorbed frat-boys with their specious economic alchemy that have bankrupted the majority. It's time for a reset that puts everyone on an economic level playing field and therefore allows these rampant disinformers to experience first-hand the debilitating and demoralizing poverty trap caused by low wages and massive unemployment. Then, and only then will they FINALLY SHUT THE FUCK UP on the subject of the minimum wage. There's one thing you don't fool around with, which is a person's ability to feed their family. Time for the boy men to find that out the hard way.

Not Enough Prozac In the World: The Frat Boys are Running Out of Time:
Three more school shootings this week, bringing the total for January to eleven, including this one today. In just one month, that's more shootings than there were in 2001, 2002 and 2003 combined.

January 2014 is now the third highest "year" on record: 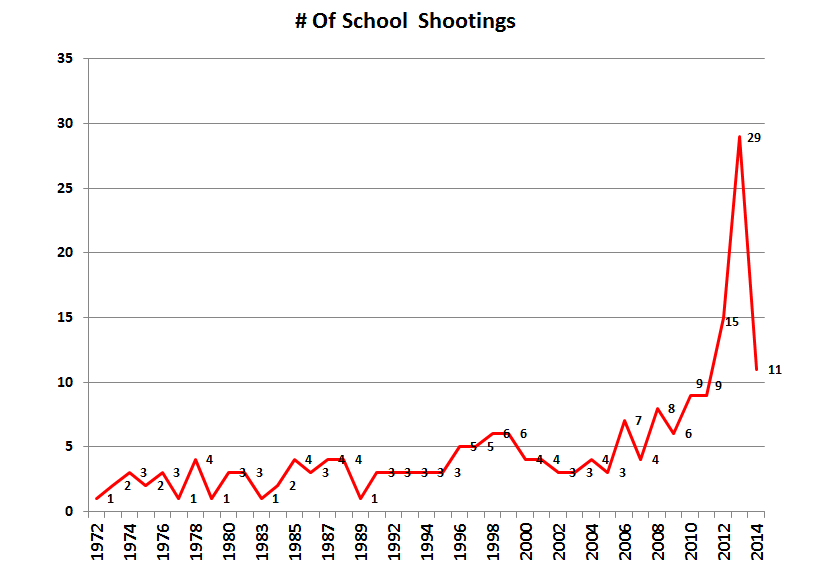 More on the subject of the Minimum Wage: