Belief in the Impossible Is Epidemic and Highly Contagious

The best way to inoculate oneself from the widespread unfounded trust in the Globalized Ponzi Scheme, is to first and foremost believe that it should collapse under the weight of its own bloated depravity. After that, faith in a new debt-sponsored illusion to replace the last debt-sponsored illusion, is not quite as alluring. I literally could just recycle my posts from 2007/2008, because this is all just extreme deja vu. I never thought in my lifetime we would see this level of stupidity ever again much less a mere five fucking years later.  Unlike 2008, this is the crisis that Wall Street doesn't see coming. This "stealth" meltdown setting up in broad daylight, is going to accomplish what Occupy Wall Street could only dream of achieving i.e. obliterate Wall Street...

Proving that the Impossible is not Possible - Where to Begin...
My goal with this blog has been to prove that the impossible is not possible. One would think that such a goal would not be that difficult. However, in a society preoccupied with shoving its head up its own ass, it can be harder than it looks. Judging by my overall readership, albeit climbing, I have not done a very compelling job.

Belief In the Almighty Bernankenstein is Pervasive (and Totally Unfounded)
Otherwise sane people who believe in this doomed clusterfuck will tell us they don't actually believe in the impossible (even though they do) instead they will say that they believe in Bernanke and the League of Extraordinary Central Banksters. Just as there was a Greenspan "put" (option) under the markets during the 1990s and 2000s, the semi-lucid masses believe now that there is a Bernanke "put" under the market in the form of $85 billion per month. Never mind that the illusory Bernanke "put" failed disastrously when Lehman collapsed in 2008.

Never Cry Reality
In order not to bore everyone with the obvious, I will now attempt to prove that the impossible is indeed not possible, all while attempting to avoid re-stating the most ludicrous widely held assumptions. For example, I will not waste your time stating that attempting to borrow our way out of a debt crisis is logically impossible. I won't point out that printing money to sustain stock markets while economies dissolve in the background is equally impossible. I may not even re-state that sending millions of jobs overseas seems like the most likely reason there is no job growth. Instead, I will dig deeper beyond the most ludicrously obvious and unsustainable asinine assumptions of the day to prove that financial and economic meltdown is inevitable.

Everyone Knows that the "Recovery" is Fake and Based on Debt v.s. Organic Growth
Again, in the interest of time, I will skip the most obviously ludicrous market data points. I won't reiterate that stock market volumes are at 15 year lows indicating zero conviction in this rally. That notwithstanding low volume, there are constant technical glitches due to the pervasive rise of high frequency trading since 2007. We'll definitely leave aside that margin debt is at a record all time high. And let's not dwell on the fact that IPO activity is the highest since 2006 and retail (small investor) fund flows the highest since 2000. I won't show more charts of Bitcoin gaining 4,000% year to date, or several dozens of stocks with no earnings, going parabolic. Why would we re-state that market breadth has been diverging on a scale last seen before Lehman?  Been there done that. And who cares that debt-adjusted, there has been zero economic growth in the U.S. (and many other countries) during the past 5 years and that whereas global debt levels were supposed to go down after 2008, they actually went up by $33 trillion. Everyone already knows that the "recovery" is just a massive lie propagated by plundering the children and grandchildren.

A Collapse of Extreme Velocity
No, when attempting to prove that the impossible is not possible, it's important to dig deep well beyond the obvious. We have no hope of making the case for what is impossible simply by stating the obvious. That never works. Meanwhile, it's not adequate to point up facts that could lead to a collapse at some indefinite point in time. Instead, it's all important to point out those risks that indicate collapse is way overdue and therefore will occur with extreme velocity.

First, Some Frequently Asked Questions from the Idiocracy:
Q: What stocks should I buy during the bubble phase, prior to the meltdown?
A: I don't know, please stop coming to this blog looking for an answer to that question...

Q: Who will tell me when I should get out of the market?
A: Your investment advisor - the same one who lost your money the last two times

Q: Since the impossible has worked for five years now, why do you assume it will end?
A: Just a stab in the dark

BTFD
Wall Street is all in and then some:
20 Day Moving Average TRIN 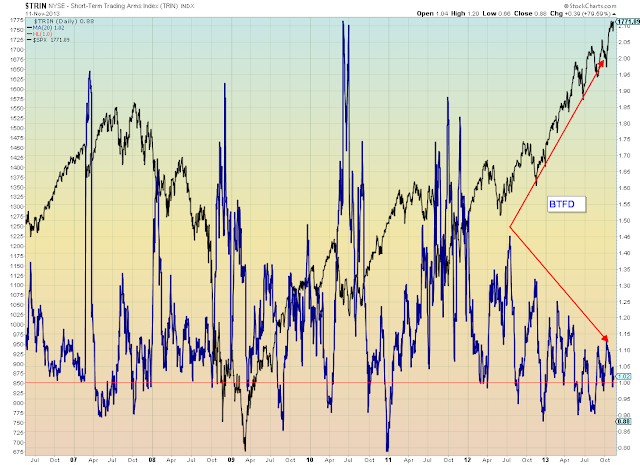 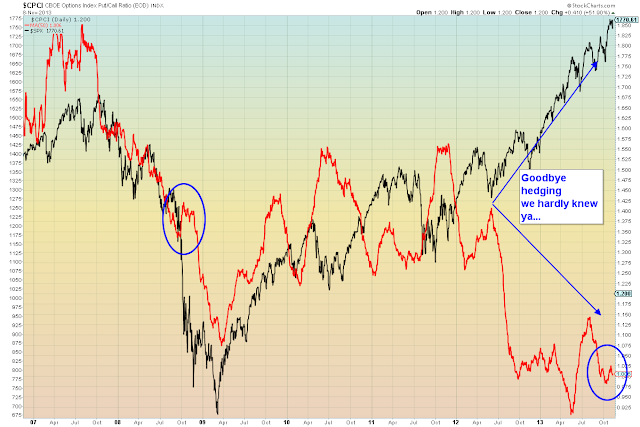 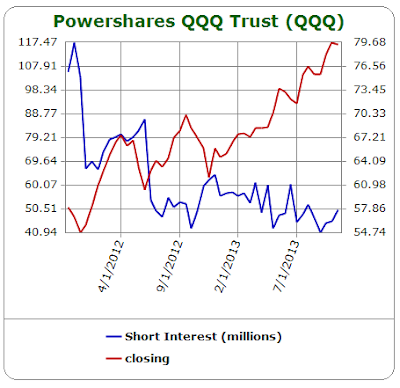 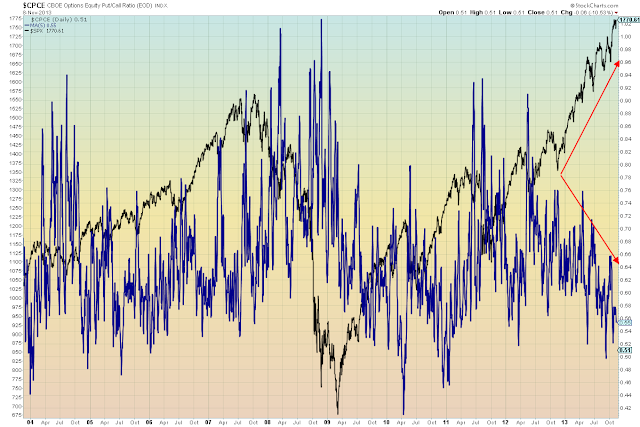 Singularity: Extreme Correlation:
I've shown the extreme sector correlation recently, but I wanted to single out two sectors - Semiconductors (black) and Consumer Staples (red) - that are usually highly non-correlated through a normal economic cycle - as we saw from 2003-2007. This what sector correlation looks like when economic "growth" is based solely upon debt accumulation versus organic growth. 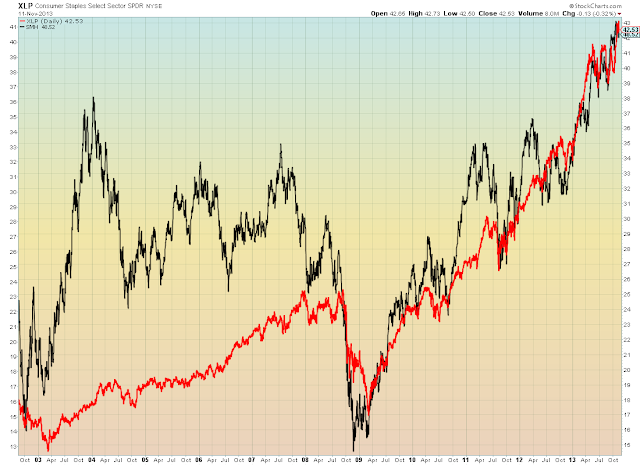 Recession Stocks Peaking Last
I won't show J&J again, but I did notice that Wal Mart is looking to make a new high as well. Everyone reaching for cheap crap at the same time... 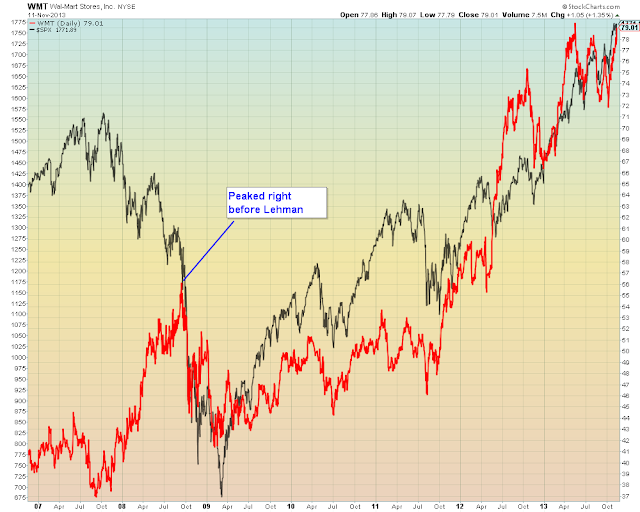 Working is for Chumps
The Secret to Effortless Wealth is Printing Money
Only a society stoned on Super-sized junk food, American Idol, and Prozac would ever try anything this stupid... 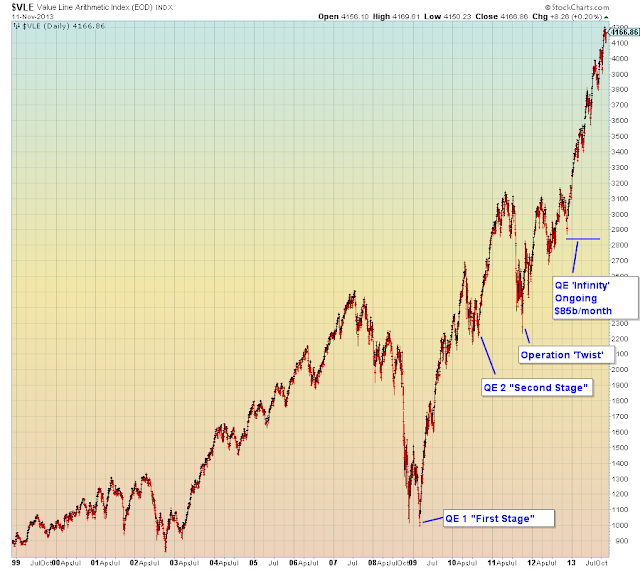 Mass Complacency
And finally, to get a really big bang, you need extreme complacency. You need everyone to believe in the infallibility of Bernankenstein. Belief in the impossible must be all-pervasive.

This is How to Obliterate Wall Street
2008 was the crisis that Wall Street saw coming. They profited from it, before - by shorting subprime, during - from the bailout, and after - due to the massive increase in corporate profits from mass outsourcing. Clearly, as we see on the far right, this is the crisis they don't see coming. Unprecedented complacency, all compliments of Bernankenstein. As it should be. 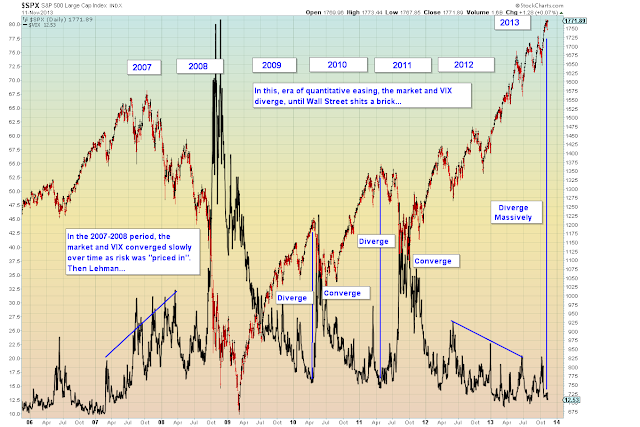 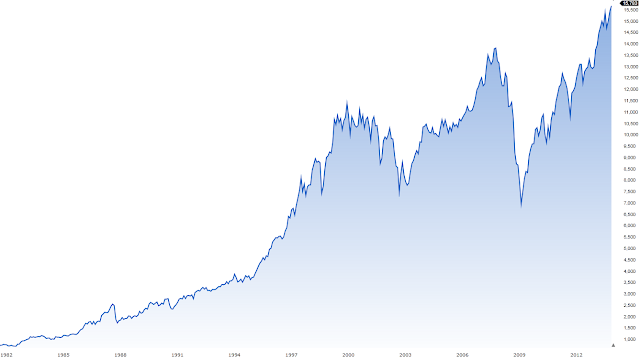