For decades we have suffered a never-ending parade of hubristic fools who have actually believed that all three were simultaneously attainable. History, reality, and 3rd grade math of course suggest otherwise. Those Neocons who honestly believe that "Reagan defeated the Soviets" are going to find out via their tear-stained 401k statements that it was the seductive Faustian Bargain posed above, that brought down the Soviets, not a 'B' Actor with Alzheimer's playing "Bonzo Goes to Washington".


1980 Flashback
You know your best days are behind you when...

Fast Forward to Today...Who Do you Trust Now?
No surprise, according to a recent Gallup poll, Americans trust nurses the most, and car salesmen the least.

Unfortunately Nurses Don't Manage The World Economy
Below I pulled the data that indicates trust in our current set of thought dealers. Basically, they are all ranked at the bottom end of the scale. The scale on the left indicates the % of Americans who highly trust each profession.

Fool Me Five Times, Shame on Me
Apparently Prozac dealers (pharmacists) are trusted 7.5x as much as politicians. So anyone who has faith in this current doomed clusterfuck (euphemistically referred to as "the economy") is free-basing pure Prozac, obtained from a highly trusted source.

"Aw Fuck, Not This Again !"
I thought we fixed Wall Street with that last free money bailout..." 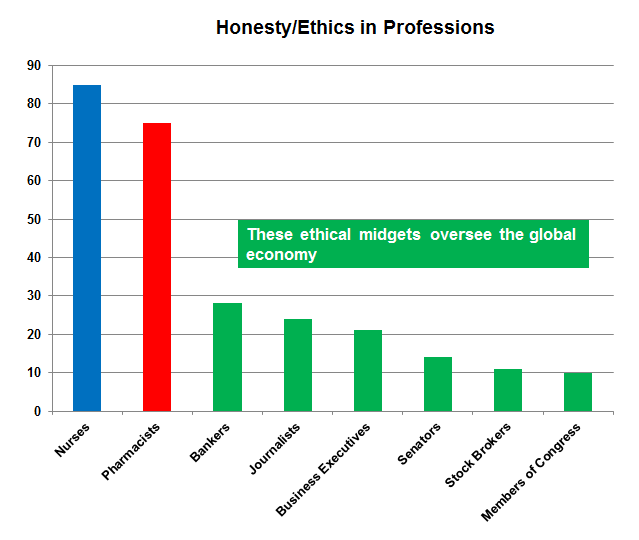