Do That To Me One More Time
Following 2008, stunned comfort-seekers wanted their 401k balances restored as quickly as possible and therefore turned a blind eye to Wall Street's corruption. Unfortunately, for the New Gomorrah, the cumulative cost of bailing out Wall Street after 2008 is far more than they can afford, and then some. So the society that never learns is going All In for a third and last bludgeoning in the exact same casino that took their money the last two times...

Y2K Deja Vu - The Last Pump and Dump
Twitter went public yesterday, capping off a frenetic week of IPO activity. This is the busiest week of IPOs since 2006. Wall Street is frantically trying to sell new stock while the bubble lasts. Some of these deals have been fiascos already, trading below their IPO price on the first day of trading. It's the Facebook fiasco deja vu, but on a much larger scale. Meanwhile, it took several years for the average investor to regain confidence in the markets, yet we just learned last week that stock market fund flows this year are the highest they have been since the year 2000.

Bubblicious
Bitcoin the Tulip Bubble of our time
Now once again, outside of the Bollinger Band on a 3,500% one year gain
Notice the lack of volume compared to last spring (Data from: bitcoincharts.com) 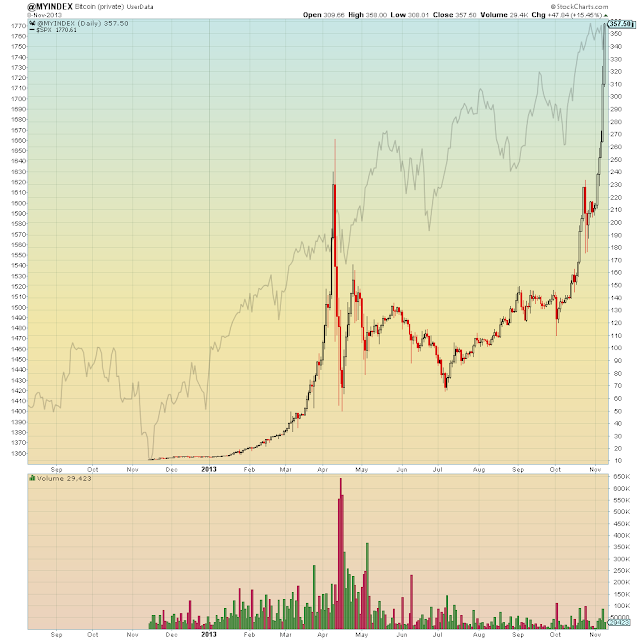 Vertical Takeoff and Landing
Voxeljet went public on October 18th at $13/share and tripled on the first day.
No froth here... 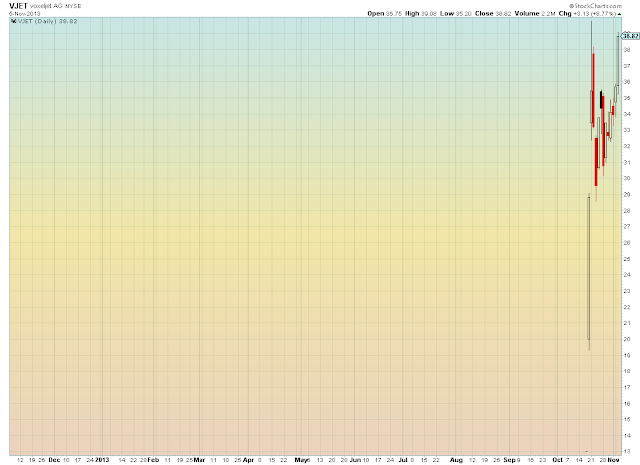 ALL IN@FULL CASINO
All of that new money is pouring into the stock market chasing totally illusory profit margins and ephemeral revenue sustained merely by ongoing debt accumulation and debt monetization. There is no inherent value to the stock market anymore, because the economy itself is not self-sustaining and under the current configuration holds no prospect of ever becoming self-sustaining. This lifestyle is doomed. The Fed's role in all of this was merely to hold the crazy train at the station long enough to get everyone onboard.

Investor's Intelligence: % Bearish (red line) @ 16.5% is lowest in two years
It only took five years to get investors fully onboard...
http://www.schaeffersresearch.com/streetools/market_tools/investors_intelligence.aspx 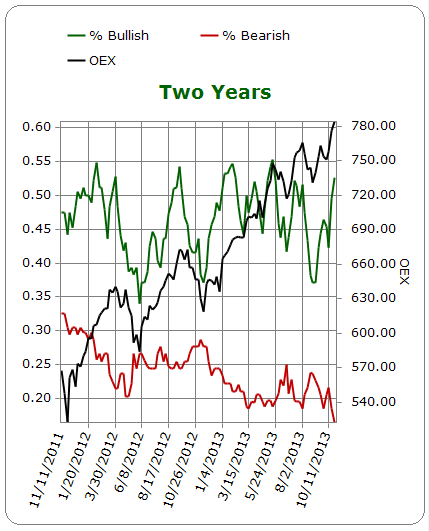 "Your Corruption Smells of Destruction"
Just this week we learned that Wall Street is still writing its own regulations and submitting them to the game show hosts in Congress to rubber stamp. The Idiocracy at large didn't bat an eye. We also learned this week that the Mayor of Toronto likes crack cocaine, which apparently is not grounds for dismissal. All of this massive corruption that is merely considered "business as usual" will be the ultimate undoing for this decadent society.

The "Recovery" is The Biggest Lie Ever Sold
The so-called recovery is predicated merely upon unsustainable debt accumulation in conjunction with Fed money printing:

The Cost of Bailing Out Wall Street is Federal Bankruptcy
I showed recently that the amount of debt accumulated since 2008 exceeds the amount of GDP accumulated since 2008 when using 2008 as the baseline - the difference being that GDP is not accumulated it's spent whereas debt stays on the books for future generations to pay. This implies a negative fiscal (Keynesian) multiplier, wherein the marginal return from another dollar of debt is negative with respect to GDP. Without ongoing debt accumulation, the economy would be deeply in recession: 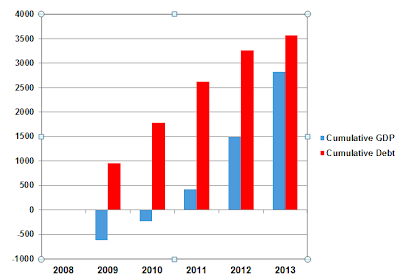 Data for above chart:

Fed Monetization
The Federal Reserve has to monetize government debt or else the stock market and economy would fall off a cliff. It's going to fall off of a cliff anyway, but the Fed Jedi Mind Trick merely delays the inevitable giving everyone a chance to get fat and happy all over again.

The Economy Is Already Deflating
The Fed pumps $85 billion of newly printed money into the economy on a monthly basis merely to keep it from collapsing. The chart below clearly indicates that every time the Fed takes its foot off the gas, interest rates (and the stock market) fall because the economy begins to deflate again. Every Fed monetization program has led to a sell-off in Treasury bonds (rise in interest rates) as inflation expectations rise.
(The Red Line is Treasury Interest Rates.)

The real question is, why the hell are interest rates still so low - lower than they were in 2011, despite a trillion dollars of monetary expansion in the past year alone?

Answer: DEFLATION
Someone call China and ask for the economy back... 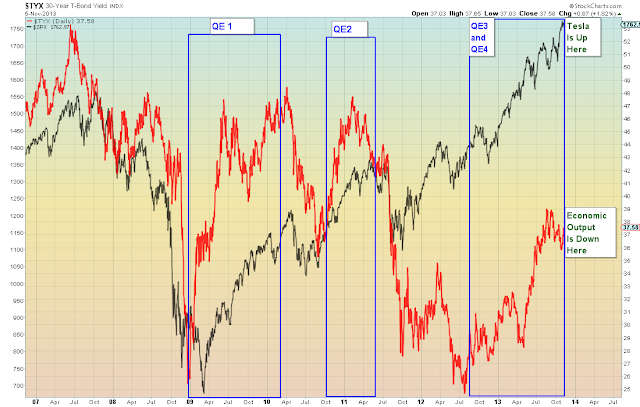 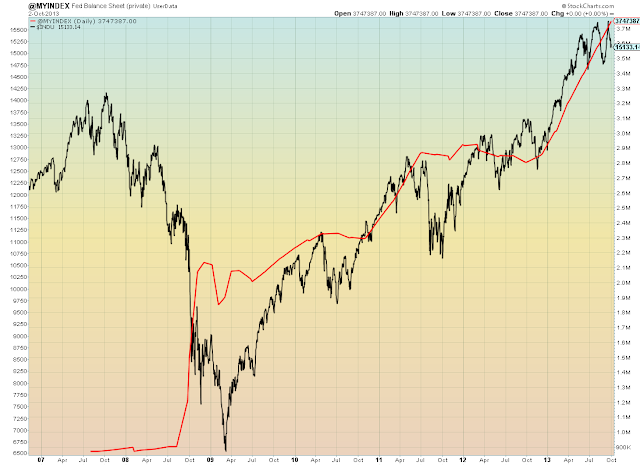 Waiting for Godot
The theory behind all of this lunacy is that if we borrow and print long enough eventually the economy will float back from China and there will be a "hand-off" between monetary/fiscal stimulus and organic growth. Unfortunately, that's where the events of 2008 come in to play. By "punishing" Wall Street with a no-strings attached bailout involving free money, the dunces at large sold their souls into oblivion to get their 401k balances back. Because the first thing Wall Street did was have their corporate errand boys sell the economy to China in order to inflate profit margins to their highest level in U.S. history. So the chance that the economy is going to resume organic growth, is now the limit approaching impossible. (Shhh, don't tell anyone, they still haven't figured it out yet). Fast forward five years and the the masses at large are still waiting for the economy to show up and bring the jobs back.

Million Dollar Jobs
Each job created since 2009, cost $1 million dollars in new debt i.e. $7 trillion in debt divided by 7 million jobs. That goes back to the point above that the debt is now non-amortizing and involves a negative return on investment with respect to jobs and GDP. Suffice to say, those million dollar jobs pay a pittance in salary, since we know that most of them were low paying McJobs. So, most of that borrowed money really just fell straight to the corporate bottom line. In other words now Keynesian/fiscal stimulus is really just another corporate subsidy. Shhh...we're pretending that's not true either...

Unsustainable Profits Killed Revenue. Next, (Lack of) Revenue Will Kill Profits
The unsustainability of profit margins can be seen in corporate revenue growth or lack thereof. Adjusting for mergers and acquisitions, revenue growth for S&P companies is now 2%, roughly the same as GDP growth. Put that in the context of a Federal deficit still running at 6% of GDP. i.e. debt-adjusted revenue growth and GDP growth is firmly negative. It's all a totally unsustainable mirage. Without a healthy middle class driving the economy, the race for almighty profits was always going to cannibalize revenue. The impending collapse and its concomitant dearth in revenue (aka. demand) will obliterate profits. What comes around, goes around.

This Casino Has No Exit
A market that has been manipulated higher over a five year period of time by a combination of HFT Bots trading on millisecond boundaries, $3 trillion of printed Fed money, $7 trillion in new Government debt, and small investor money finally pouring in after four years of being on the sidelines, offers no way out. Sentiment towards this fake market is massively complacent from both hedge funds and small investors. When it collapses, there will be nothing to stop its fall. There will be no one on the other side of the trade. Correlation across all sectors is now at 100% so the only place left to go is out of stocks into "cash": 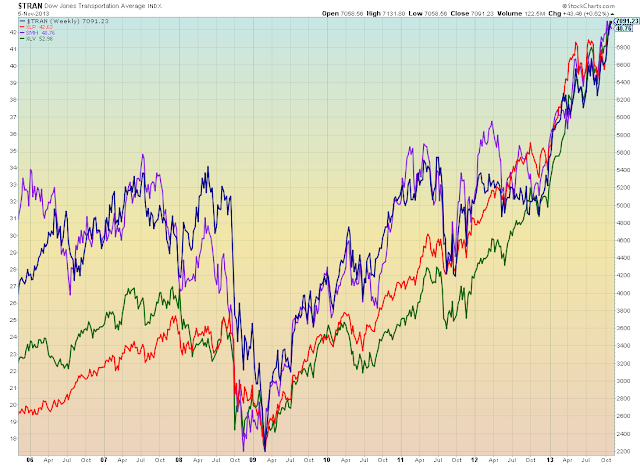 How Long Can This Continue?
You tell me how many fools are left to throw their life savings into this contrivance and I will tell you when it will end. Clearly I underestimated this society's ability to be duped over and over again. The power of wishful thinking can't be underestimated. The Baby Boomers have one goal in mind which is to retire with full benefits, regardless of the past choices they have made - endorsing military blunders, tax cuts for RomneyBots etc. So, now nothing is allowed to change that could affect that program. The 2008 wake up call was totally ignored and history's dumbest generation went All In yet again, buying into an all new debt conflated mirage even more lethal than the housing bubble. History's most decadent society this side of Gomorrah was bound to sell its soul to keep the party going for a few years longer. How much will they lose this time?