Decades ago, business students were taught that the role of business was to maximize profits. However, that wasn't direct or obvious enough, so by the time I hit undergrad business school in the late 1980s, the goal of business was to maximize share price - by any means possible. The difference may seem academic, however, in reality it meant that "non-organic" means of boosting share price were now on the table. Hence the Leveraged Buyout frenzy of that era, which was rebranded the "Private Equity" frenzy of our current era. This rebranding was necessary due to the bad publicity arising from the gutting of well-established blue chip household names. And after all, a bit of sleight of hand is all it takes to fool the Idiocracy.

The separation of ownership and management and limited legal liability were of course the other two "innovations" differentiating the corporate business model. These two key factors were critical to incentivizing corporations to act in the most sociopathic means possible towards the achievement of excess profit and share price - all other considerations are considered mere hurdles to the ultimate goal. The other piece of the puzzle is addressed by "Agency Theory" - also taught at business school. Agency theory deals with the concern of risk aversion on the part of shareholders. By delegating decision making authority to agents (aka. management) and incentivizing them to maximize profit/share price, this issue is theoretically resolved i.e. one more step towards creating the sociopathic organzation. According to Agency Theory - and commonsense - the agent will be willing and motivated to undertake actions that the shareholder would be unwilling to undertake if they could not undertake them anonymously. Voila.

Wall Street: The Ultimate Wealth Concentration Machine
Back in 2009, I described how Wall Street has created the ultimate wealth concentration machine via securitization. In addition, I gave Microsoft as an example of an extremely profitable company - the most profitable in world history - that regardless was under extreme duress from Wall Street to continue to increase quarterly profits. Hence, they laid off thousands of workers back in 2009, even though they had enough cash flow from one quarter to cover those workers for over a decade. Fast forward to today, and the company now has $75 billion of cash on its balance sheet. I just read an article in Time magazine describing German Mittelstand (privately owned) companies that cut wages AND raised capital from the private founding families, in order to avoid layoffs. Now of course, those companies are thriving. That sort of shared sacrifice in which the employees and shareholders both take a hair-cut, is totally anathema to the godless temple of greed that is Wall Street and the public corporation. The Germans, to their credit, have been adamant for decades that they would never adopt the "Anglo/American" business model aka - Fire and forget. Apparently they have an attention span and forward-looking vision longer than that of a coked up flea.

This rabid obsession with quarterly profits is yet another piece in the overall puzzle explaining the overwhelmingly single-minded pursuit of short-term profits and share price at all costs. The chart below depicts the inevitable outcome of this obsession wherein corporate profits are now at the highest level in the past 75 years. Meanwhile, wages of course are at an all time low as a percent of GDP. The relentless drive toward profit subsumed not just Wall Street and corporations but of course flooded Washington as well, wherein all political parties and candidates were bought and sold like crack whores. 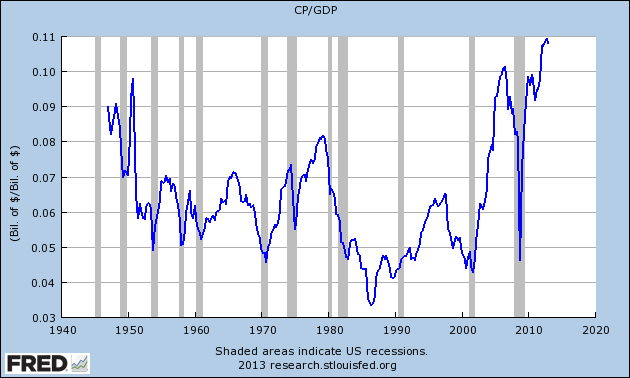 Do No Evil
Those who want a more recent example of corporate sociopathy can look at Google. That iconic company was started by two well known PhD students from Stanford. Their company mission from the outset was "Do No Evil". The company went public back in 2004 from which time forward its business practices and policies came under the heat lamp of Wall Street. As we would predict, as long as the company was meeting and beating expectations, no "adjustments" were necessary. Then came the inevitable day when Wall Street extrapolations exceeded economic reality. Soon after, the company was handed a "grown-up" CEO (Schmidt), who set about turning the company into a disciplined sociopath, like all of the other Wall Street progeny. Fast forward to today, and "Do No Evil", has been re-interepreted as "We Own Your Data" - all of it. Your gmail emails, your blog posts, your google docs content.

Self-Cannibalizing Greed
The self-canniabilizing greed machine is running out of things to eat and it will soon come home hungry. At that point in time, Dr. Bernankenstein and all of the other greed apologists will find out the hard way that the price of all of this corporate excess and decadence is going to be mighty steep. More than most can pay...