Financial market Black Swan events (aka. asset crashes) are neither rare nor unpredictable. I call them 'brown swan' events i.e. highly predictable inevitable events that everyone assumes won't happen in their lifetime e.g. another debt crisis that will conveniently be passed on to the next generation. The analogy of a brown swan is a person with his head in the sand when a white swan flies up his ass. 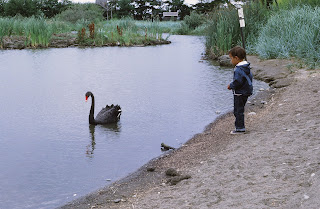 Previously I had shown a chart of the TRIN 50 day moving average. Below I show the TRIN 200 day moving average (red line), which shows unambiguously that the market is multi-year overbought i.e. low values indicate overbought. When I say overbought, I mean that capital has continued to flow into the market uninterrupted for a long period of time, so there is now a huge amount of capital committed to the market. That is the consequence of having no significant corrections for a long period of time. The past two times that the 200 DMA turned up the market crashed - in 2010 and 2011. Notice that the 200 DMA is even more overbought now than it was each of those two times. Clearly, from these levels it will take a lot of selling in order to work off that long-term overbought condition i.e. for capital to flow out of the market. Therefore, the real question on the table is whether there will be buyers at lower levels or did the majority of capital already commit at higher levels.

The answer to that question will determine the orderliness of decline: 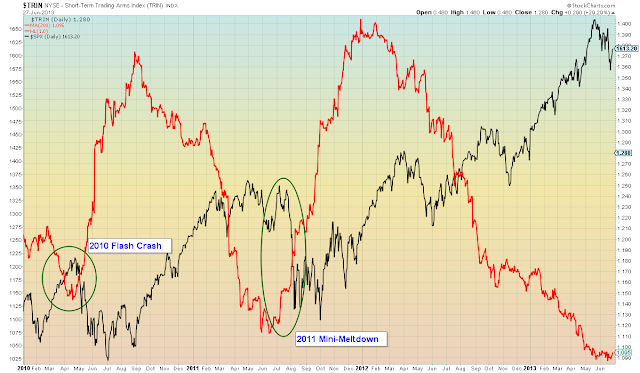 Crashes Occur When Least Expected (by the majority)
By definition, crashes occur when the overwhelming majority of market participants least expect them. Therefore, they almost always occur from an inflated price level rather than from a deflated price level. Many people were fearful of a crash at the bottom in 2009, however, that was unlikely because one had already occurred. Once a crash has already occurred then fearful investors sell out and those who remain invested generally hedge by selling a partial stake or by buying options. That's why the VIX spikes at market bottoms because large institutions are reaching for protection. That reaching for protection puts a floor under the market, by essentially bringing large amounts of (expensive) capital back into the market via the options market makers. They stand ready to buy the market lower if someone wants to exercise their put options. It's an expensive floor to be sure,  but it's a floor nonetheless.

High Conviction Equals Complacency
So crashes occur after a period of market elevation, as occurred in 1987. They also generally need to occur rather quickly following a top or at least following a recent rally. If the market trends down for a period of time, then the "surprise" factor is significantly reduced, as investors cash out ahead of time or otherwise reduce exposure. So, having a large amount of capital unhedged is a key requirement. The other key factor is that investors need to be bought in to the asset/market and otherwise have a high degree of conviction. The reason why gold and Apple keep going down incessantly is because investors still have a high degree of conviction in those trades, even though they have been decimated for over a year now. Until they capitulate, there will always be marginal sellers who outnumber the buyers. This stock market that has been going up for the better part of four years straight arguably has a high level of conviction. There are myriad sentiment surveys we can point to or just realize that a market that does not correct for a significant period of time tends to build up a high degree of conviction. Meanwhile, Central Banks have convinced the vast majority that there is a "put" (option) under the market that will keep it from falling; therefore, the feeling on Wall Street right now is that you can bet against Central Banks and lose your job and bonus by being underinvested or roll the dice with someone else's money to gain the fat bonus i.e. what everyone else is doing. It's not really much of a choice when you put it that way. Back in 1987, there was a similar "put" under the market called portfolio insurance which turned out to work exactly the opposite to how it was intended.

Nothing Matters Until It Matters
Beyond being elevated and having a high degree of conviction (aka. complacency), then there needs to be a catalyst or at least a fabricated catalyst for a sell-off. Back in 1987, as indicated here, there were a confluence of factors that culminated in the panic crash. Oftentimes these are just known risks that are simmering in the background that all come to a head at the same time - a chain reaction of factors that seemingly coalesce out of the blue. As Art Cashin described in October, in 1987 there were several different factors that seemed to amplify investor anxiety, yet no one prominent factor that would warrant a massive crash.

This gets back to the concept of Elliot Wave Theory. If social mood directs the markets, then when social euphoria peaks and starts to decline, the resulting manic "backlash" will cause a lot of background issues to come to the foreground at the same time. Things that were not of concern a few weeks ago, magically become major issues, even though they haven't substantively changed in the meantime.

The biggest well known (and ignored) risk right now is the potential for a global currency crisis. Global Central banks have pumped over $9 trillion into world asset markets, much of which made its way into the "carry trades" - borrow in one currency, invest in another. The inevitable unwinding of that trade will cause massive dislocations that will make 2008 seem like a minor event. Essentially it will be akin to a global bank run. The fact that China and Japan are both experiencing currency and liquidity dislocations right now, is a harbinger of things to come.

Here is what Bill Gross had to say about the 1987 Crash (back in October at the 25th anniversary of that crash):