David Stockman's rant was good, but it was too long and convoluted to capture the attention of the Idiocracy, which has the attention span of a coked up flea.

Below in about one page, I will easily refute the assertions of Paul Krugman and the myriad other thought dealers of our time who have convinced the Idiocracy that the status quo is indefinitely sustainable:

The U.S. debt was $1 trillion in 1980, today it's $16 trillion. That's a 9% compound growth rate annually for over 30 years. During that same period, GDP growth was in the 2-3% range annually. The only years when the debt did not go up were in the late '90s when capital gains from ephemeral dot com stock gains temporarily boosted tax receipts.

In the past decade, fiscal deficits have been incurred during recessions and "expansions", which gives lie to the term "expansion". Fourth quarter GDP growth was ~.1%, while the fiscal deficit is still ~6% of GDP.

2) A Sustainable Economy is MIA

The weakest job growth in U.S. history. The debt expanded $5 trillion in the past four years and yet only 5 million jobs were added, which equates to $1 million per job. Ludicrous.

The lack of job growth ties directly back to globalization - a topic everyone wants to avoid - including David Stockman. The U.S. is bleeding jobs out the side to the export mercantilists, and the U.S. can't compete with nations that have no labour or environmental standards and otherwise suppress their wages and currencies via reverse capital flows. The bottom line is that there is no sustainable organic job growth anymore. The bar-tending and construction jobs that were added during the Bush administration, were obliterated in 2008.

These are the only two charts needed to realize the economy is in deep trouble and the status quo is unsustainable. Profits as % of GDP left, wages as % of GDP right. 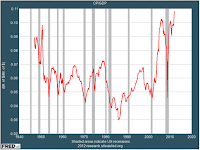 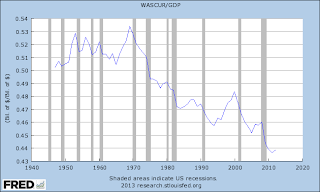 3) Quantitative Easing - The Alchemy of Our Time

Another thing that Krugman & Company can't assert is whether debt monetization policies, now in overdrive, at the Fed and other global Central banks, won't end in another collapse. They don't know, because these policies are unprecedented. Some would tell us that printing money has been attempted in the past and always leads to hyperinflation. However, what is currently being attempted is to print money solely to be used by speculators to prop up risk assets while the borrowers - aka. counter-parties - to those risk assets, become less solvent with each passing day. Much of the world's debt is traded on exchanges and is repriced in real time; therefore, solvency - in terms of ability to refinance that debt - is tested continuously. It's purely a function of investor confidence. If yields (interest rates) rise too much, refinancing becomes impossible. Last week the world financial system was on edge when, Cyprus, one of the world's smallest countries, had a solvency crisis. Am I to believe that Krugman and Company can assert with certainty that there are not dozens of nations out there on the verge of a solvency crisis? In 1997, it all started with the Thai Baht. Overnight, the "hot money" was fleeing Asia - sovereign bonds fell like dominoes...

This strategy of propping up lenders was never tried for a reason -
It took up until now to find a society dumb and phony enough to believe that adding leverage to a financial system without addressing its underlying solvency, makes sense. Even worse, this entire ludicrous policy was packaged and sold by the same buffoons who crashed the global economy the last time.