Ignore All Risk - And Live the Lie...

Let's see, the U.S. market (.SPX) is at the same level it reached in 2000 and 2007 when it topped. More importantly, the technical risk indicators, are lined up the same way (chart below)...

Europe's sovereign debt crisis - like the subprime housing crisis of 2008, is by no means resolved...

Geopolitical risks are as high as ever, with North Korea just now fully approving a U.S. nuclear attack, and having pulled out of Kaesong - i.e. both likely preludes to an invasion on the South. What better way to keep the U.S. out of the conflict, than to pre-announce a tactical nuclear counter-strike...

So aside from higher risk, what is the only other real difference between now and 2008?
Self-appointed thought dealers from Wall Street to Washington, are brainwashing us constantly to ignore all risk...

Latest Proof: The Idiocracy Will Believe Anything (or Anyone) To Ignore Reality...
Bear in mind, this isn't some wild-eyed blogger: David Stockman, former budget director under Reagan, wrote an excellent piece in the New York Times, detailing the history of U.S. profligacy and concluding that this latest bubble would inevitably collapse. Sounds vaguely familiar...I don't agree with every part of it, but clearly the themes he is elucidating, for the most part, are littered across this blog - mostly around fiscal and monetary irresponsibility. He even went after the "great one", Reagan, which guaranteed that he would be banned from CNBS and Faux News. Of course, almost overwhelmingly, the article was criticized as a "rant" by a cranky old man. The article was full of reality, facts, data and even commonsense - all of the things feared and avoided by the Idiocracy. Fortunately, all of the usual sophists quickly appeared to reinforce all of the lies underlying our ephemeral gilded age, and otherwise reassure the geriatric set that reality would not interfere with retirement. Stockman found out the hard way that you can't talk down the markets within days of an all time Dow high without getting monkey-hammered by the Idiocracy. He took it from all sides. My only disappoinment was that he was vague on the timing of the collapse, giving it a "few years". Of course, I give it a "few days", which is my consistent stance for the past four years. My only goal to be ever-vigilant.

The Enemy Within
Picking back up on my rant...as usual, the baboons in Washington are totally oblivious to risk. Is there anything these fools can do to help their country? Go into hiding for four years? Anything, really. I recently posted that the U.S. had devolved into a kleptocracy. Not withstanding 400+ blog posts going back since I started blogging over six years ago, that one single term most accurately depicts my view of the U.S. at this juncture. There is an entire media industry of course devoted to denying any such thing, which only further proves my point. Yet one more risk that will only fully be confronted after-the-fact. Ironically, it won't be North Koreans or terrorists that bring down the U.S. Empire, it will be Americans.

News as Entertainment - The Gilded Age of Bullshit
Looking back on this phony era from the future, historians will say that this was the gilded age of bullshit. B.S. has been so finely honed to perfection that it's interwoven into every aspect of society. The ubiquitous infotainment format of course is merely a necessary accoutrement to this over-commercialized era. When the truth got productized to be palatable to corporate sponsors, then all reality and objectivity went straight out the window. As I wrote recently, "Plausible Deniability is the Opiate of the Masses". It's a specious genre that allows a comfort seeking society to conveniently fashion its own conclusions, however, delusional.

Living Large Inside The Matrix
Meanwhile, the stewed masses are so obsessed with sports tournaments and reality tv shows, that they are willfully ignorant to any form of risk. Four years of headlines that so far haven't meant anything have totally desensitized the frogs in boiling water, splashing around, like it's a hot tub. Well, you get what you pay for, and this generation didn't pay for anything, instead accruing history's largest debt, the invoice for which will be presented seemingly out of the blue. I can't evince any sympathy for a morally bankrupt generation that has deluded itself into thinking that its children and grandchildren will be picking up the tab for its ongoing "guns and butter" profligacy.

Paul Krugman Meet Hyman Minsky
Lastly, my favourite chart again below says it all. Back in 2007 - similar risks - except the market was already correcting and options volatility was already creeping up, reflecting some amount of hedging was taking place to mitigate risk. This time, there is no risk mitigation whatsoever. The hook is fully set.

"Incontinence products" will soon be in high demand once again... 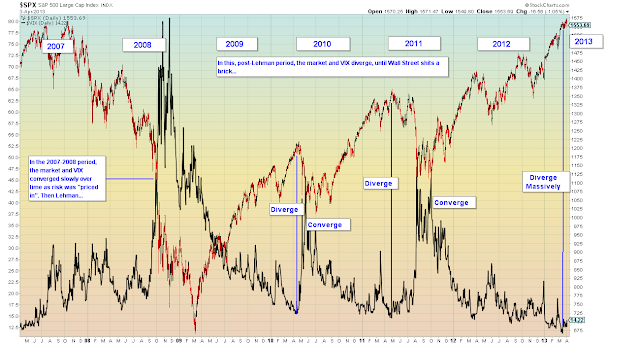