The Financial media are out there again sowing mass confusion over the risks of owning bonds v.s. stocks. I have been steadfast that owning short-term Treasuries is the (relatively) safest haven. Which they have been through thick and thin...

Short-term Treasuries weathered the 2008 meltdown, the 2010 Flash Crash, the 2011 stock meltdown, the 2011 debt ceiling impasse, the 2011 U.S. sovereign debt downgrade, the recent Fiscal Cliff debacle and massive doses of Quantitative Easing which everyone said would be inflationary.

Here is a chart of the SHY - 1-3 year Treasury Bond ETF - the easiest way to own Treasury bonds. The rise shown on this chart is due to two factors:

1) Stockcharts the charting service I use, adjusts the ETF price for interest coupon payments by lowering the historical prices relative to the current price i.e. the coupon is imputed into the chart

2) Short-term interest rates fell precipitously after 2008 and have remained low ever since - lower interest rates translate into higher bond prices. 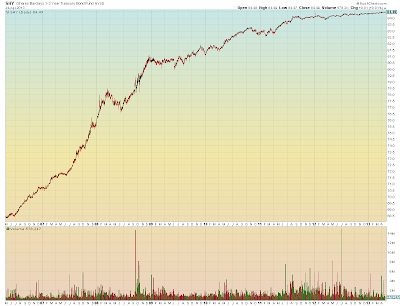 So, what could cause short-term Treasuries to tank?

1) A U.S. Default: If the U.S. decides for some reason to default on its debt then of course T-bonds would go to zero. However, politicians exist to feed their special interest groups, and a default would do the opposite - it would take away the fiscal feed bag and essentially destroy the U.S. economy.

We've also seen two increases to the debt ceiling in the past two years - so clearly the politicians only use that lever as a way to play political games - and notice in 2011 when they failed to raise the debt ceiling - the U.S. debt was downgraded, but T-bonds rallied, whereas stocks were crushed.

2) A Rise in Interest Rates: An increase in core inflation would cause interest rates to rise - either because the Fed eased back on monetary policy or because bond holders decide to demand a higher yield. So the crux of the issue is on inflation v.s. deflation - and you know where I stand. Bernankentstein & Co. have showered the ultra-wealthy with trillions leading to asset inflation even as wages stagnate. They won't give the middle class any money because that would cause a generalized price inflation, which would tank bonds and stocks as the risk free rate would rise hence repricing risk and ending the carry trades. Any price "inflation" we've seen around oil and food is due to the asset price levitation feeding back via the futures market into spot prices. That inflation is due to speculation and hence it's temporary, as it was in 2007. Now that commodities are tanking, those prices will come back down.

Commodities and Gold Are A Wake-Up Call on Renewed Deflation
We already know that the commodity complex is sensing renewed deflation, as all commodities have rolled over hard recently. Gold's recent collapse is another sign of impending deep deflation. The entire macro data set rolling over lately indicates massive deflation. Finally long-term T-Bond yields are sensing deflation (below). Here I show Long-term bond yields relative to stocks. The blue circles show that bond yields have responded to every new QE monetization by rising due to "reflation". Lately, however, they are falling back, even as stocks power higher. Stocks are disconnected from every other asset class, because stocks respond to greed more than every other asset class. As I have said before, on the other side of the next meltdown, inflation will turn negative and interest rates (yields) will turn negative - whether "real" (inflation-adjusted) bond yields turn negative is anyone's guess. Lower bond yields of course portend higher bond prices: 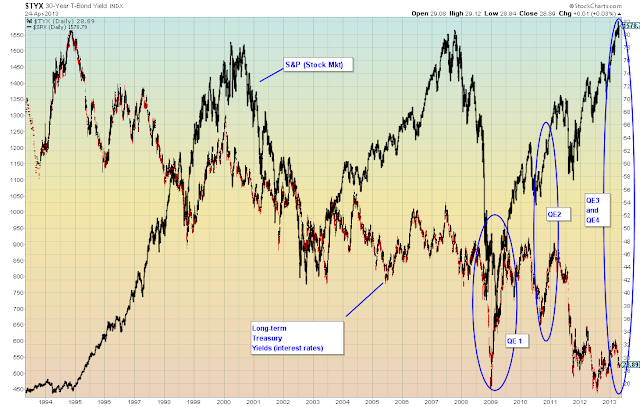 On Gold
Prechter's latest Elliot Wave Theorist predicts gold falling to ~$200 - eventually, not in a straight line. I didn't blink when I saw that, although I was thinking more like $400. Either way, the logic is solid. Gold has no yield - and in deflation, dollars will be in extremely short supply, therefore any asset denominated in dollars that does not have a consistent dollar-denominated yield will go down in value.

Bear in mind that other types of bonds - those issued by corporations, municipals or other countries still contain considerable default risk. Perhaps a German Bund or Canadian Government Bond or Aussie Bond or Swiss Bond is as safe as the U.S., however, you need to factor in currency risk (if you live in the U.S.).