Historians will package this entire era of Central Bank monetizations under the heading of 'economic euthanasia'. Bizarrely, even as the underlying economic fundamentals steadily deteriorate, it feels as though the status quo can be maintained indefinitely. One would never know that Central Banks have to step in daily to support the markets, to keep them levitated. Meanwhile, this artificially generated feeling of economic stability gives the policy-makers the cover to do the only thing they are capable of doing to fix the real economy i.e. nothing...


I read this article recently telling me that Central Banks don't buy stocks, therefore it's a misconception that the Fed supports the stock market. Technically speaking, the article is correct. The Fed doesn't buy stocks, they buy bonds from large investors who then buy stocks. In other words, by intervening in the markets, the Fed lowers yields and forces everyone else to seek yield, pushing investors into riskier assets. So, while the article is technically correct, this view that the Fed doesn't support stock prices is technically bullshit.

We live under the fundamental delusion that Central Banks know what they are doing, and can control any adverse consequences from their unprecedented market interventions. Unfortunately the history of Central Banking is not quite so flawless. Way back in 2001 after 9/11, Alan Greenspan - Bernanke's predecessor at the Fed, lowered interest rates to 1% to kickstart the economy. People went crazy buying cars and furniture using "patriot loans" aka. 0% interest financing. Soon all of that extra liquidity found its way into the housing market which drove that bubble. In other words, people responded 'rationally' if not over-zealously to the market incentives before them, resulting in massive debt levels. Then to make matters worse, Greenspan made a speech ~2002/2003 indicating that homeowners should take full advantage of variable rate mortgages since they have lower interest rates (because they place interest rate risk on the borrower). That gave mortgage bankers the signal to drive a massive refinancing cycle based on this "advice" from the Fed. Then, starting in 2004, the Fed, under Greenspan raised short-term interest rates 17 times in a row (every ~six weeks) from 1% to 5%. They obliterated everyone who took Greenspan's advice to use a variable rate mortgage, because the reset from 1% to 5% wiped them out. There are people today who don't have a home, only because they took advantage of the incentives that were placed in front of them by Central Banks.

That's about all you need to know about Central Banks and how they operate. They have no exit strategy, and they can withstand untold amounts of economic pain, because they don't feel any of it.

They are the alchemists of our time and on the other side of this latest bubble, they will once again claim that they played no part in the collapse. Already their apologists are trying to tell us that they don't support the stock market. If that's so, let's see what happens again when they stop monetizing debt. The bottom line is that they are making this up as they go and they have no viable exit strategy, just like last time. The housing bubble that resulted from low interest rates, culminated in the crash of 2007/2008 due to over-leverage which eventually manifested in 'subprime'. Today, bad sovereign debt will be the 'subprime' of this era - sovereign debt that can no longer be serviced, resulting in default at the national level.

[Still working on that right shoulder...] 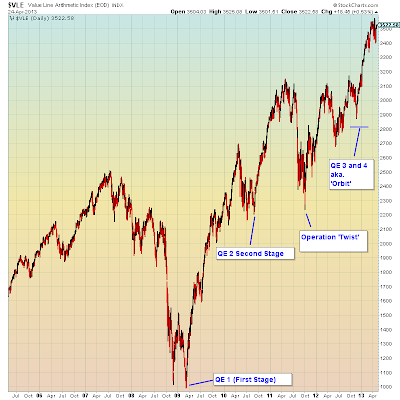