A *Real* American (Accept No Substitutes) 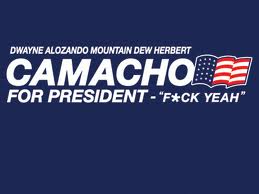 Donald Trump is de facto nominated President of the Idiocracy.   It was a tight race with millions of contenders, but Trump won by default.  More than any other man, Trump epitomizes the sort of egomaniacal, buffoonish, blowhard sociopath now running rampant in leadership across the Idiocracy.

Is he a 'Trumped' up version of the stereotype?  Perhaps, and that is why he deserves to be the President, for embodying the ideal.  However, there are still myriad media outlets willing to give him plenty of air time e.g. CNBS just today.  And here on Faux News, Trump waxes eloquently on scantily clad models, golf resorts, politics, jobs, the economy all in the same interview - the new Renaissance Man !  Whereas the Renaissance Men of old were considered well rounded in the arts, sciences, maths, and philosophy, the Renaissance Men of the Idiocracy have the following accomplishments:

His only deficiency, is that he didn't attend Harvard; however he did attend Wharton where he obtained, no surprise, his B.S...