This is an addendum to my most recent discussion around deflation v.s. inflation.  Specifically to discuss the "Great Treasury Bond Bubble, as it were..."


Last night, EWI, posted a 'Special Alert', indicating that Long-term Treasuries are entering a bubble phase, as depicted in this chart of the TLT (Treasury ETF): 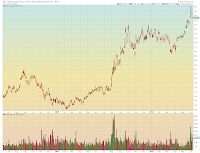 By the way, they are far from alone in thinking that LT Treasuries are 'over-valued' and primed for collapse.  Just off the top of my head, Marc Faber and Doug Kass both recently reiterated their bearish view on LT bonds.  Keep in mind that the investing graveyard is littered with people trying to short LT bonds.

While EWI did not recommend shorting LT Treasuries, they did say they should be avoided.  They also said that all other types of credit should be avoided as well.  In other words, they are recommending to hide your money under a mattress or in your backyard i.e. their 'Special Alert' ended up creating more questions than answers.  For most of us it's not practical to withdraw our 401k retirement savings to cash and stash it in the basement.  Bear in mind that Money Market funds which Wall Street considers 'cash' are actually short-term bonds issued by companies.  So when you take away LT Treasuries, Corporates, Municipals, 'Agency' bonds (aka. Fannie/Freddy), and Money Market funds, what are you left with?  The answer is short-term Treasuries. EWI, no surprise doesn't particularly think ST Treasuries are that safe either, but they did say that they are likely 'safe' for the time being. NO, they won't protect you against U.S. default, however, based on the model I presented recently (link above), the U.S. will likely be the last nation to default.  A conclusion I arrive at by process of elimination.  The recent very strong move by the U.S. dollar backs up this hypothesis of the U.S. as safe haven of last resort, as the dollar is already strengthening against all major currencies (including Swiss Franc), except the Japanese Yen, which lives in a world all its own...This move in the dollar is highly consistent with the deflationary thesis, and is a very small taste of things to come, as in full blown deflation we can expect the money supply to collapse and the dollar to go parabolic.

Therefore, I personally disagree with EWI on LT bonds (full disclosure, no current position).  Due to pervasive deflation and the collapse in the money supply, Long-term yields will turn negative at some point, hence that TLT chart above will go full vertical.  I see TLT at 160 minimum with potential for 200.  Barring default, the only thing that would cause LT Treasuries to fall is if interest rates rise.  However, in a deep deflation, real (inflation adjusted) yields will de facto rise as the CPI falls, giving nominal (quoted) yields a lot of latitude to stay the same or continue lower (boosting bond prices).  A (not even) extreme example would be the CPI at -3% vis-a-vis a nominal bond yield of -1%, still netting a real return of 2%.  Meanwhile, even EWI's own analysis from the 1930s showed that LT Treasuries were the LAST type of bond to experience selloff - only when the prospect for default was imminent i.e. here in Denial-Land that means about two years AFTER the fact.

As far as from a safe investing standpoint however, I concur with EWI that for most of us Short-term (1-3 year) Treasuries are the safest option (for now).  The easiest way to buy 1-3 year Treasuries is via ETF (symbol: SHY).