Liquidity Trap = Game Over for Fed (for now...) 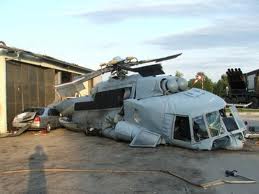 The situation that 'Helicopter Ben', student of the Great Depression, sought to avoid is now upon us.  At yesterday's Fed meeting, Bernanke disappointed the markets by simply extending Operation Twist (using proceeds from short-term debt maturing to buy long-term debt), which will have limited impact because there is only ~$260 billion in short-term debt left i.e. that game has almost run its course.

So the situation we now find ourselves in, is a classic 'Liquidity Trap' - wherein additional monetary stimulus fails to impact the economy.  That comes as no surprise to anyone who assumes that there is a natural limit to the amount of borrowing that can occur in any economy i.e. it's not just the cost of money (interest rate) that matters - ultimately it's the repayment of principal that matters.

The chart I posted recently showing Treasury yields at the lowest level in 30 years, is the clearest indication that further monetary stimulus will have minimal impact, other than to further widen the disconnect between stocks and reality.

What went wrong?
So while Bernanke may pride himself on being an expert student of the Depression, there is one major piece of this puzzle that he overlooked.  The typical Monetarist assumption is that the Fed in the 1930s made a major mistake by reducing the money supply (to reduce the outflow of gold), thereby exacerbating the economic downturn.  First off, comparing a gold-backed money supply to a fiat money supply after-the-fact is a specious comparison i.e. a gold backed money supply could never have grown to be as ludicrously large as the current money supply has become, in the first place.  The real key difference between then and now is during the 1930s when the Fed inadvertently 'tightened', the credit collapse was already well advanced, hence, one could argue that a looser money supply may indeed have been a helpful remedy at that time.  And therein lies the key to why Monetary Policy has now been rendered totally inert and ineffective - because Bernanke didn't wait for the deflationary credit collapse to occur and hence wipe out most debts via default and bankruptcy, creating a clean slate.  His objective was to bail out lenders before the collapse took place.  So his goal wasn't to reflate the banking system after-the-fact it was to take a credit bubble that was failing and attempt to rescue it by making it even larger.

Here Lies the Fed
This will be written on the epitaph for the Fed in this era: They depleted their arsenal of monetary policy tools before the collapse, in order to rescue Wall Street from itself, at the expense of the real economy.  The end result is that they have now created a far larger credit bubble, depleted their conventional policy tools, and hence made the ensuing (impending) Depression 10x worse than it would otherwise would have been.

Fire up the Helicopter, Ben...
So while 'Helicopter Ben' - so called because he once said he would drop cash from helicopters in the event of just this type of situation, has yet to resort to that extreme option, that would appear to be the only (highly extreme) tool left in the Fed arsenal.  The Catch 22 for the markets, is that it will take a major adverse deflationary event for the cash/fat stacks distribution option to have any political traction whatsoever.  And, of course, reaching for the nuclear (hard cash printing) option will obliterate what semblance of a financial system remains at that juncture.  The credit (lending/borrowing) economy will be dead, leaving a C(r)ash only economy, as in Bring Your Own Wheelbarrow ('BYOW') .  But, we need not be too concerned about that prospect at the moment, because there is no doubt a tad bit of turbulence to bridge between now and then... 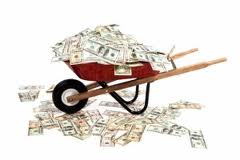