[Updated: 6/20/2012]
Wall Street, which has the attention span of a coked up flea, has long ago forgotten the painful events of 2008; therefore they are regarding this European debt crisis as a buying opportunity... 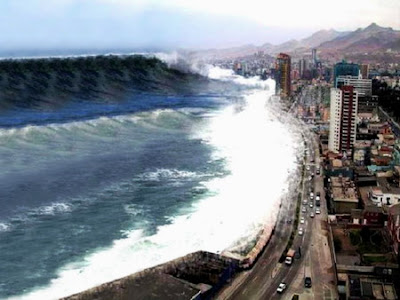 I just got into a dustup with Harry Schiller over at RM.com over this exact post...  He is always talking about his contrarian positions i.e. 'buy the dip', 'buy the gap', 'BTFD', 'BTFGap'.    I've been reading that same recycled crap for the past 6 years (yes, through the 2008 debacle), so I finally pasted the link to this post and I said:
"More total B.S...- Mr. Shiller, you are not a contrarian, as indicated here: "

KABOOM !  The gloves were off.  Here is how he responded:
"It's spelled Schiller. It's actually Dr. Schiller to you. Your simple-minded perma-bear view of world markets and what drives them must have been a big success and source of inspiration for you and your readers over the past few years while the S&P has doubled. When you have something intelligent to say about what constitutes a contrarian position, I'll be happy to read your comment. Till then, Beginke!"

First off, 'my bad' for spelling his name wrong, call it a  Freudian slip.  Much more importantly it's incredibly telling that he didn't refute any of the data or logic I presented in the original post (below, after the jump).  That's because I don't have three degrees one of which is from Harvard i.e. I am not in his 'league'.   Which only goes to confirm the fact that we are being led straight down into the abyss by empty shirts from Harvard who clearly have no time for commonsense or reality - the tools of the 'commoner'.

In response to the S&P doubling comment I pose a basic math problem for Dr. Schiller:
Question: If the market fell from 1550 to 666 and lost 57% of value and then 'doubled' from 666 back to 1332 -
Would the market be higher or lower than it was prior to the fall ?

Time's up: The first grade answer is that 1332 is clearly lower than 1550, the third grade answer is that it takes a 132% gain to recover from a 57% loss.  Which is precisely why if you didn't recommend your investors hold into the abyss in the first place, you don't need to dig them out of the hole after-the-fact.  Unless, like most investment advisers you need to speciously take credit for a 'doubling' in their money, even as the market is lower than it was in 2007.

And talk about a bad week to brag about your big 'double off the bottom'.  Median household wealth is now lower than it was in 1989.  In other words, for the typical American family, the depression is already well underway.  But don't bother telling that to the 1%, because as I just found out, they need to learn the hard way... 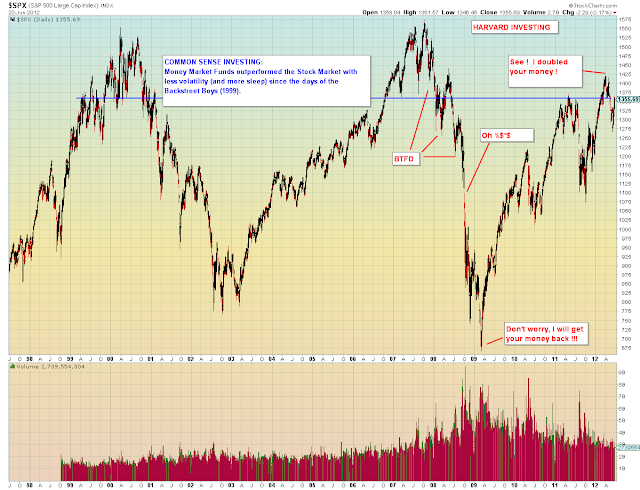 [Original Post: 6/5/2012] w/updates from [6/14/2012]
It took a while, but I finally get it.  I've been looking around at all of my usual web sites wondering why there is so much complacency in the face of complete economic and financial annihilation.  The general theme is that the standard technical 'indicators' are now oversold and sentiment is 'bearish' therefore it's time to buy (here, here, here) .  It's a response heavily conditioned by 30 years of largely bull market, not withstanding the past 12 years of sideways action.

Therefore, like Pavlov's dog, as soon as these indicators hit certain levels, then it's time to back up the truck.  My analogy is one of a surfer alone at the beach, eagerly contemplating a great day of solo surfing, oblivious to the Tsunami looming in the distance i.e. these 'contrarians' always assume that the crowd is wrong, even in the face of overwhelming risk.

Even more interesting is the fact that sentiment (as I recently pointed out) is not even that bearish and every dip is still being bought:

And, as you also see above, the VIX (black line) options fear gauge is still low relative to last year.  Volume (bars at the bottom) is still very low as well.

Meanwhile, polled sentiment (below) is still not that bearish (red line): 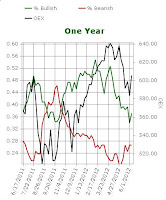 Never Cry Reality
But most important of all, reality has not been suspended.  So those looking around for 'contrarian' indicators for why they should own stocks, are assuming that everyone who really is bearish - is once again wrong.  That's my fault, and the fault of every other 'perma-bearish' blog, because we have been explaining reality for so long that people think it no longer applies.  Meanwhile faith in Central Banks to solve any and all economic and financial problems just by monetizing more debt, is complete.  Everyone assumes that the Central Bank 'tail' can wag the market 'dog' forever and there will be no blow back from that strategy - no unintended consequences.  And all those middle class types selling their stocks now (aka. clearing the beach for higher ground), they must be wrong again too.  After all, they were always wrong in the past.  What do they know?

This Time Will Be Different
No surprise, Germany has hit the wall with Extend and Pretend and is now looking for the the U.S. to bailout Europe.  Which explains a lot why investors are still complacent, because as always they assume the U.S. government will be the lender of last resort.  I can tell you with 100% certainty that the U.S. will never bailout Europe.  As I wrote recently in This Time Will Be Different, there will be no more bailouts of anyone, much less foreign banks and governments.  I live near D.C. and I hope our demented government leaders are not foolish enough to even mention this, because at that point D.C. would be sacked, no question.  My post above "This Time Will Be Different", went viral within minutes i.e. people are just waiting for the buffoons in D.C. to screw up again, so they can begin the rampage...


The Water Always Goes Out (Fast), Right Before It Comes Back In (Faster)...
Even as I write this, Spanish bond yields are hitting the critical 7% level.  The Spanish bank bailout that occurred over this past weekend and cost broader Europe 130 billion Euros, had literally no effect on calming the markets. Meanwhile, Italian bond yields are rising dramatically now as well, indicating contagion is underway, therefore the High Frequency Bureaucrats are hitting the inevitable brick wall called reality.