Deja Vu of last August, the market is already in freefall and yet the media, public and investors are largely oblivious to the ubiquitous signs of resurgent financial and economic distress.  As we now know last year's crash was mitigated by global central bank intervention.  So reality was yet again delayed, but will not be denied.


On the economic side, just this past week we got yet another reminder that this economy can't create jobs, despite the unprecedented monetary and fiscal stimulus.  Why not?  Because the self-nominated "job creators" (aka. 1%) are too busy outsourcing existing jobs which has levitated profit margins to a 65 year high. Yes, you read that right.  And therefore, labour's share of national income has fallen to an all time low and is collapsing like a cheap tent.

No Class Warfare here
So, those who would call Obama a Socialist need to get a fucking clue.  Under this President, labour is doing worse relative to capital than at any time since the Great Depression.  I am still waiting for him to take off his mask and say "Surprise !  You elected George W. Bush three times !".  But of course to the right wing media he is a black man in power, so he needs to be hated with full vengeance.  Even his universal medical coverage plan is hated by the right, despite having been (re)written by the insurance industry.  So now insurance industry executives are shitting bricks because their own party is inadvertently turning on them.  It's the revenge of the demented tea party hypocrites who are now running amok within the Republican party.  Of course, they want publicly funded medical coverage for themselves ("keep your hands off my Medicare"), but as for the kids and grandkids, they can go to hell.

The Idiocracy is now self-cannibalizing
But you can't call it class warfare, because obviously the war is already over and the 1% rentier class won hands down - no contest.  Game over.  Moreover, the 1% recruited many of the aspirational 99% to do the heavy lifting in the jobs liquidation process.  That's right, there are millions of managers in this economy who rely on a steady pay check to afford the obligatory McMansion, and yet these corporate stooges inadvertently outsourced their own jobs.  Only the Idiocracy would outsource its own livelihood while at the same time supporting the anti-labour political movement and its rabid media outlets.  Apparently these guys think they are part of the elite jet set who don't need a pay check to survive.  Yet most of them can't go two pay checks without being bankrupt.  Just imagine on the other side of this fiasco when they realize they are the next in line - "Oh shit! I thought we were screwing over everyone else in the country, not me!".

The economy didn't have to be a zero sum game, and for most of U.S. history it wasn't, but once organic growth stopped and reversed around the early 1970s, then efforts shifted towards splitting the pie versus growing the pie.  Financialization aided by Monetary Policy was the other key factor.  After all, if you can't grow a real economy, then you might as well leverage up 3.5x using cheap money.  On the political side, rent seeking - which is an issue for every government since the history of mankind - went into overdrive.  Each party taking turns raiding the cookie jar then mortgaging it to the hilt.  The Constitution and its weak protections were no match for legions of lawyers hell bent on making money.   You don't ask a barber if you need a haircut, and you don't ask a lawyer if you need another law.

On the global stage, it's the same story.  According to modern economic theory which is based on Ricardian Comparative Advantage, trade is theoretically not a zero sum game.  But once again, theory met reality and got its ass kicked.  All of the Asian developing nations used export mercantilism to bootstrap their way to the big table.  Export mercantilism is just the modern incarnation of good old fashioned "beggar thy neighbour" policy.  You can argue that it was an eventuality that living standards would equalize between nations, but the glide path is the real problem i.e. the long-delayed 'adjustment' in Western living standards will be instantaneous rather than gradual.  The irony is that these developing nations are adopting an economic model that is neither scaleable nor sustainable, as commodity prices at multi-decade highs continually remind us.   Given that emerging market consumers' incomes are growing and Western incomes are stagnant or declining, every dollar of higher food and energy costs is another nail in the coffin for the U.S. middle class who in turn support the jobs in the emerging markets.  And yet, this all assumes that the current Ponzi model is stable and can grow inexorably, whereas Minsky Theory, commonsense, and recent events beg to differ.


Getting back to the here and now, as expected, today's pyrrhic victors of the class war are not satisfied with record high profits and record low wages - they want it all, the Full Monty.  And in pushing the envelope, they will be the next class to lose it all - via market liquidation.  Keeping with the theme, the capital class cannibalized their own market when they bankrupted the Middle Class; but don't tell them that, because they haven't figured it out yet...

As I started out by saying, the markets are deja vu of last year and investors are ignoring the vertical decline that is already occurring in plain view.  Why?  Partly, because the general public (aka. the "dumb money" per Wall Street), has left the building in disgust and therefore that leaves big investors as the de facto bag holder.  Not being used to that position, however, you will understand as to why they are perplexed that the general public have yet to show up to take this steaming turd off of their hands, as they have done at the end of every rally for the past 60+ years.

What you see below is a 5 year market chart with the (VIX) options fear gauge at the bottom (black spiky line chart).  There are three major spikes visible - one in 2008/2009, one in 2010 (Flash Crash) and the one last August.   If you look to the right, you see the market already breaking down since last week, and yet the fear index barely breaking above 20.  Stay tuned for future events. 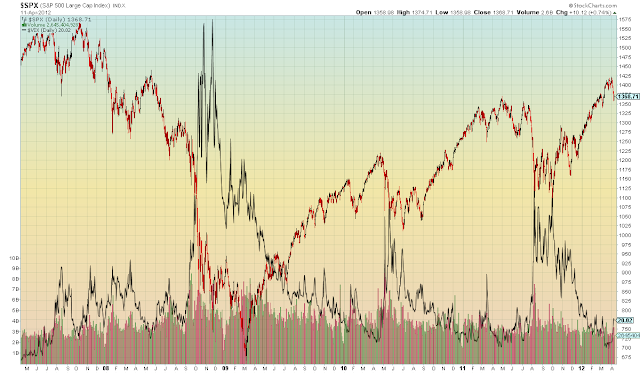