Once again, copious Central Bank liquidity has lulled the General Public back into its semi-lucid coma.  All is well in Fantasy Land.  Even Occupy Wall Street is quiescent and the Idiocracy on Wall Street has taken the opportunity to mock them.  Yet just today we received the latest rude reminder that the markets and by extension the economy are solely supported by Central Bank monetization programs.


Today the Federal Reserve released its meeting minutes from the meeting it held back on March 13th.  So what, right?  You would think it's old news.  But like a junkie going through the nightly trash looking for Lysol bottles, Wall Street had a conniption upon parsing the 3 week old meeting minutes, because the Wall Street crack whores found no mention of further monetization aka. free money a la QE3.

On this news, ALL markets tanked - stocks, gold, bonds, commodities and the safe haven bid went to of all things Apple.  Yes, you read that right, all major markets tanked, except Apple and several other over-bought, over-believed high beta hedge fund favourites.  Imagine for example, that Priceline.com has now become a safe haven !  Major investors selling their Treasuries to own Lululemon Athletica or Ultra Salon - after all, in a bad economy, doesn't everyone need to get a pink jumpsuit and a pedicure ?!  For those who just fell off of a turnip truck, this action is 100% Deja Vu of March 2000 when the Nasdaq stocks went up relentlessly on good news, bad news, any news, until that one day ~(March 24th, 2000) when they suddenly topped, turned around and went down relentlessly.  Ahh, yes, the good old days...

For those who would like an updated view of the soon-to-be iPad train wreck: 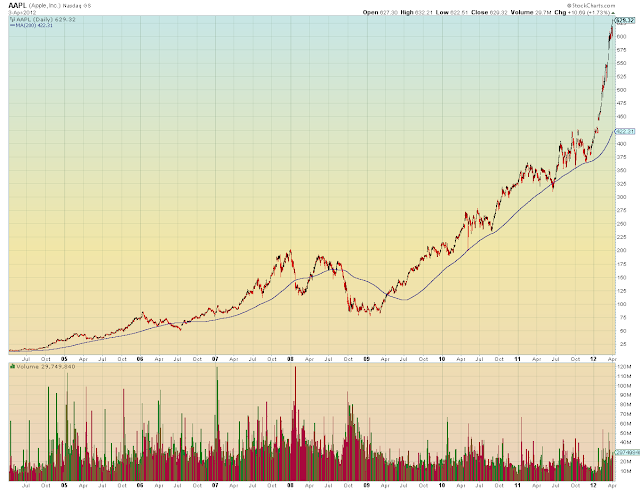 For some perspective, just in the past two days Apple added 30 points which is $28 billion in market cap.  And that two day gain in Apple's market cap is roughly equivalent to the entire market cap of each of these companies (individually): Lockheed Martin ($29.6b), Dell ($29.5b), FedEx ($29b).  You get the idea- one of America's largest defense contractors worth two days of speculation in a glorified iPod company.  As always, you can't make this shit up.

Meanwhile, what's going on in the real world?
Over in China, that stock market is approaching a three year low.  As we know, it's Chinese wage slaves who make the iPads, but as the chart below seems to indicate, they aren't keeping too much of the profits: 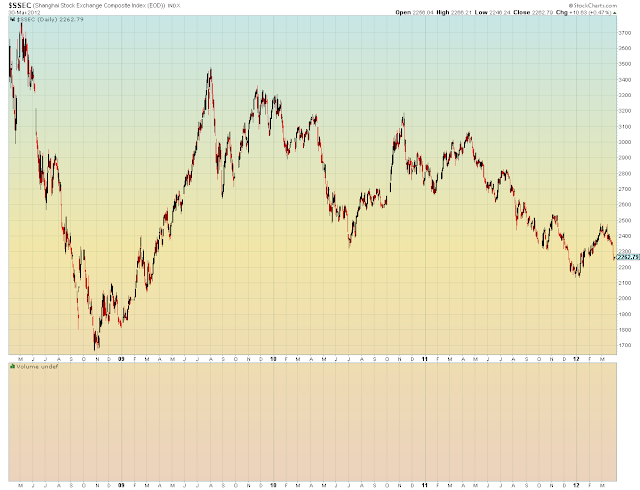 Meanwhile, Spain which is the odds-on candidate to be the next Greece and hence spoiler of our latest liquidity induced narcoleptic coma, is looking set to plant face: 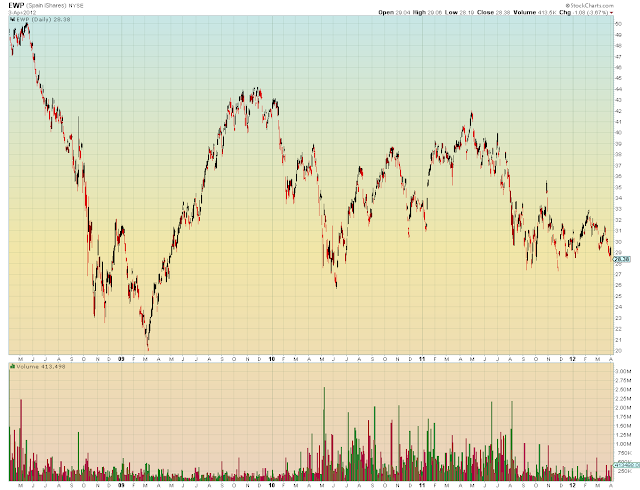 And as I started out by saying, the Fed DID NOT hint that it has plans for further monetization given the current economic data, so consider the Monetary crack house shutdown, at least temporarily.

As I have said before, we don't need to wait to see how this movie ends, we have seen it before.  The real question is whether or not everyone exits the theater in an orderly fashion...