The Elevator Ride Down. To Humility.

Note to archaeologists: Yes the end of the Roman Circus was as insane as it sounds. It's all you need to know that today's Evangelicals actually believed Donald Trump was their saviour. Which is why this revelation cannot come as more of a shock to them. They still haven't located three wise men and a virgin...

Japanification gone global - the serial over-use of stimulus as a proxy for a real economy, at the expense of future generations. All so that an aging society could pretend "nothing has changed" in their cannibalized lifetimes. Whereas in reality everything was commodified for quantity over quality. The corporate Disneyfication of everything, overseen by a generation of sociopathic Mad Men, and economists who know the cost of everything and the value of nothing. Now placing their full faith and credit in simulated prosperity, by way of proving their intellectual bankruptcy...

Now, with the benefit of hindsight, we know that the U.S. entered intractable deflation approximately two decades ago with the DotCom bust, 9/11, and of course China WTO ascension. When, for the first time, the Fed lowered rates to 1.5% in order to pull forward consumption, resulting in the housing bubble and bust. Most people think that the housing crash was due to subprime loans - that was only the proximate reason. The real reason was that the Fed had pulled forward consumption from the future and used the housing market as an ATM machine to do it. That's the point at which I realized this was all going to end extremely badly. Short-term Japan-style gimmicks instead of real economic policies.
Over the past ten years since the global financial crisis, globalization has been fully deconstructed. The only thing standing between this oblivious society and revelation is the central bank asset bubble. The disintegration of globalization went into overdrive three years ago under Trump. Compliments of his exceptional ignorance of global trade and investment flows. He, like most mercantilists, believes that trade is a zero sum game. Which is why he sees every other country as a competitor nation using "currency devaluation" to cheat the U.S. out of exports. And therefore explains why he is constantly using trade war as a way to punish other nations. He has no clue that the dollar reserve currency status is what makes the U.S. currency less competitive. The indestructible curse.
"Americans are proud of the fact that the dollar -- their money -- is also the world's dominant international currency. But this very same global role also helps explain some of Americans' major complaints about the world economy: why we constantly run sizable trade deficits; and why U.S. manufacturers often are at a price disadvantage with foreign competitors."
The need to blame other countries for corporate America's greed, is paramount. It wasn't U.S. companies that shipped jobs and factories to China to gain record profit margins, the Chinese came here and stole them. For all the reasons, Trump's rank amateurism has completed the process that 2008 started. The American century has now been fully deconstructed under the slogan "Make America Great Again". You can't make this shit up. Likewise for Boris Johnson, via the Brexit fiasco. The two countries that built globalization have now torn it down.

Is this what their voters really wanted? Of course they would say yes - still unwilling to face the full magnitude of what they have wrought. However, what they really wanted and believe they got, was a seamless break from globalization, paid for by someone else. A free lunch.
Little do they have even the slightest clue that the bill is about to be served to them personally. And for that we can thank the echo chamber of exorbitant conceit for keeping these people in the dark as long as possible. People too distracted by politics to understand that their entire way of life is now gone with the wind. Fools who believe they get to vote for their own version of reality via a slot machine handle in a voting booth. And a game show host for president.
And to think that the U.S. used to criticize Japan for its deflationary policies, and now this country is doing the exact same things. To date, global central bank money printing has acted as an inflatable bumper to keep asset crash at bay. In the process inflating an ever larger bubble. Now, compliments of central bank dopium, asset correlations are approaching 100%. Whereas there used to be safe havens, now there are none, outside of zero yielding "cash" (t-bills, money markets).

"Buy Everything"
"The S&P 500 is up more than 25% and counting. Treasurys, which tend to fall when risk assets rally, also gained in 2019. Oil, gold and corporate bonds all scored double-digit returns."
This does not constitute investment advice, it is merely an observation. I predict today's gold lovers will get monkey hammered along with the rest. Like everyone else, they have been front-running central banks for over a year straight. There will be NO REFLATION until they put money in the hands of the middle class.
And for that there will need to be a regime change. And I don't just mean political, I mean ideological. This bullshit American mythology has put the entire middle class at risk.

History will say that Trump's facile and infantile views of the world were his fatal undoing. A man who inherited everything he ever owned and then squandered it. He is emblematic of his entire generation and the economic debauchery that has ensued over these past decades.

And then of course there were his true believers who could no longer tell right from wrong, good from bad, real from fake.

Globalization has been entirely to the benefit of America's ultra-wealthy. The fact that Trump could tear it down in broad daylight with 95% Republican approval is exceptional. In the broadest sense of the word.

Proving he is the chosen one, no question. 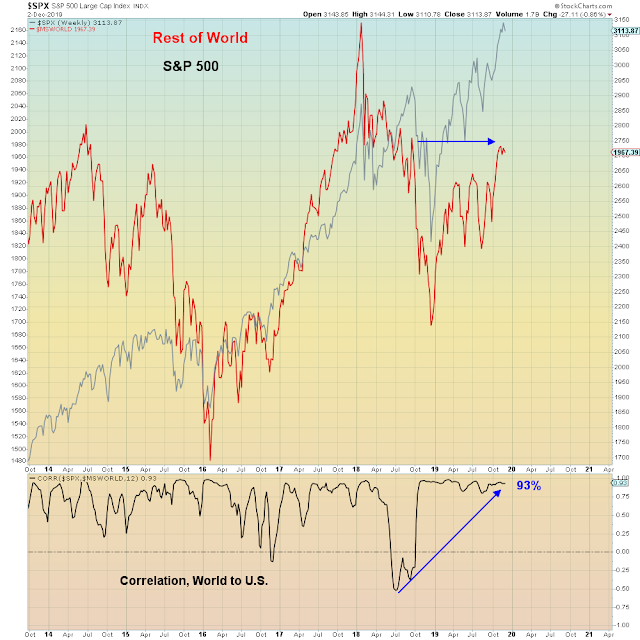