On A Long Enough Timeline All Con Men Implode

The era of bailouts and the rise of alt-reality has been exceptionally kind to today's cadre of leading con men. They've had a good run, with a very strong finish. They've amply proven that they can't order reality, but they can order a stampeding herd off a cliff... 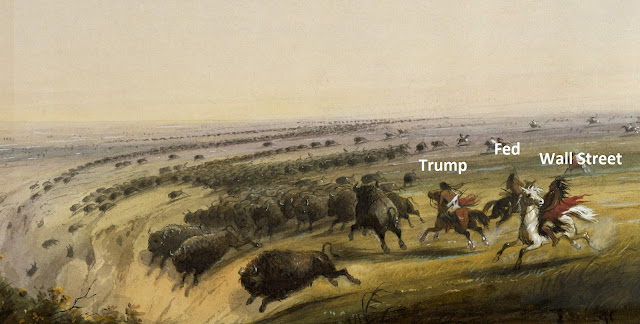 What we are witnessing right now is human history's greatest example of survivor bias, whereby the ever-fewer beneficiairies of Ponzinomics are the only ones who still have a voice. While the marginalized are systematically ignored. Which is why the public at large are still drinking the Kool-Aid:

As we see, the recent decades of swapping out factories for burrito assembly lines has been steadfastly labeled "progress" by today's robber barons, economists, and other apologists for greed. The Global Financial Crisis put the reinvention of failure into success on steroids. The alchemists of the day call it, "the new normal". It's what I call Japanification: The serial overuse of monetary policy to stave off an ever-rising tide of deflation. The failure of global capitalism to create broad based prosperity, ultimately leading to zero return on labour and now zero return on capital. Rampant out-of-control poverty on a global scale.

Contrary to the opinions of today's robber barons, this is by far the worst time to be alive in the past fifty years when measured in terms of quality of jobs, job security, upward mobility, real wages, healthcare costs, non-existent pensions, and overall debt. All wrapped up with environmental degradation on a scale unprecedented in Earth's entire history. In terms of progress, fifty years ago, the U.S. was launching missions to the moon, now testosterone challenged man-boys question that it ever happened. Elon Musk's SpaceX commercial venture is a pale shadow of NASA five decades ago. Perhaps in terms of human rights, now is better than any other time in human history, however, from an economic standpoint, the vector is straight down. The economy has been systematically strip-mined to the benefit of fewer and fewer mega wealthy individuals, leading to what can only be described as an ersatz economy:
er·satz
"artificial substitute of inferior quality"
Outside of the U.S. "TINA" bubble, global stocks have gone nowhere for over a decade, despite tens of trillions in central bank printed money: 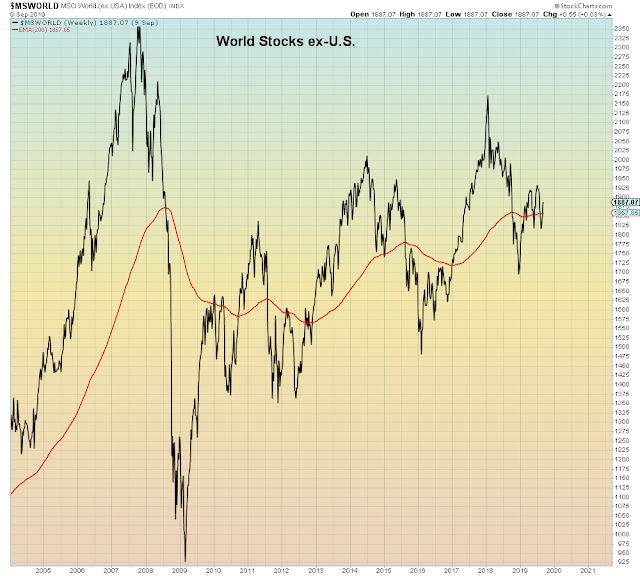 Over a decade ago, I and many others predicted a hard landing from the Housing Bubble. Back then I believed that the middle class corporate ATM machine had reached its limit. I also predicted that China would be left with empty factories as their Pyrrhic "reward" for beggar thy neighbour mercantilism. None of that of course transpired immediately, as we know. Because instead, we got bailouts of this society's greatest and most lethal criminal entity: The Financial Services crime syndicate known as Wall Street. Which meant that the wealthiest among us saw their wealth increase while everyone else was further marginalized for another decade. It was a tragically fatal decision, because of course it gave free reign to a much greater level of fraud and criminality, now manifest in record deaths of despair and record mass shootings.

Wall Street's last con job is telling the near-retirement masses that stocks usually rally for another year AFTER yield curve inversion, because it portends imminent central bank dopium. However, gamblers have been front-running the Fed for over eight months straight. Now, the Fed will only cut rates at a pace that gamblers have already priced in IF stocks crash, OR if the economy is in recession. Either way, lower interest rates portend lower stock prices.

Speaking of which, notice that railroads peaked in late 2008 and already peaked earlier this year: 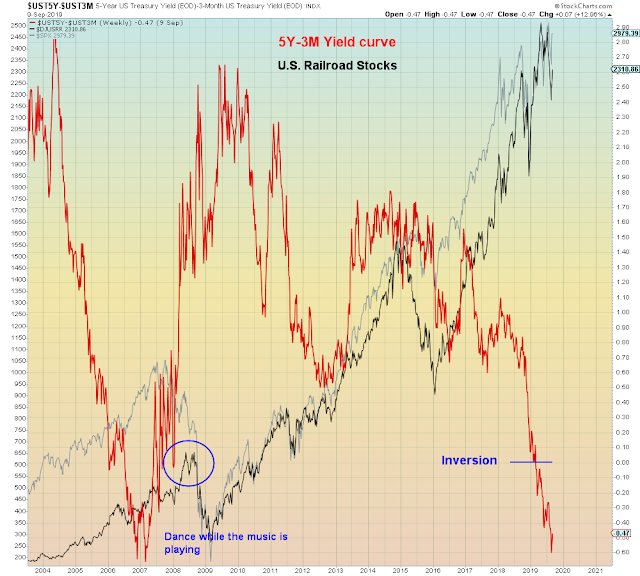 Bank and financial stocks have been shellacked by the yield curve inversion, but fake hope springs eternal:

Reversal of fortune. Yes. Breakout. No. 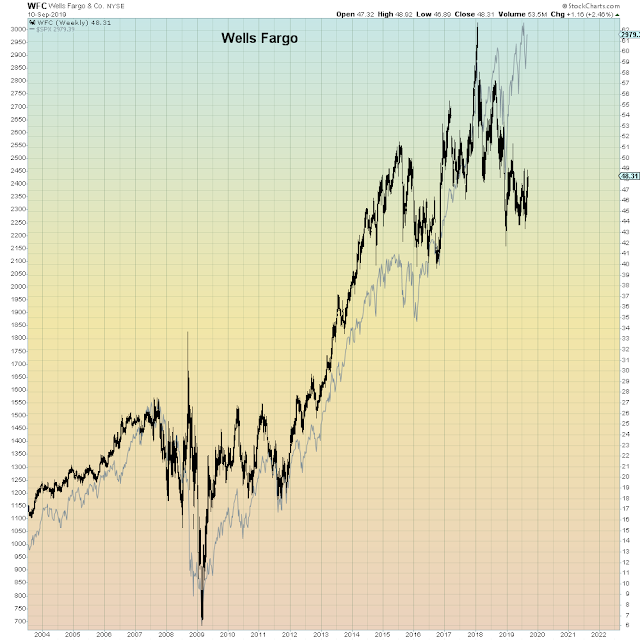 Once upon a time, America's drug and violence epidemics were confined to the black inner cities, where they were easy to ignore. All it took was racism. Over the past decade however, America's exceptional ability to ignore poverty inconveniently migrated out into the white suburbs and rural hinterlands. Bush and Trump country are now ground zero for the opioid epidemic, while mass shootings are almost 100% a white phenomenon. Far from being a racial problem, poverty was merely afflicting the most marginalized populations first, on its way to the rest of society. The black inner cities were the canary in the coalmine, because it turns out that poverty does not discriminate.
Likewise on a global scale, for the past decade the "Third World" nations have made no progress on climbing out of poverty, instead, the "developed" nations have been busily joining them. Globalization was intended to equalize standards of living - and it surely will - just not the way everyone expects. Yet again, racism plays a key role in obligatory denial.


In other words, I was not wrong, I was early. And the price paid in the meantime for this vacation from reality, has been steep. But it's been "uneven".
What comes next will bring what was needed in 2008 - shared sacrifice. At which point, the rampant con men of this era will be silenced for good.
And only from that nadir, will things get better.