The stock market is the fulcrum by which wealth is transferred from everyone else to the rich. When that breaks, we'll all be on the same page. Globalization hasn't made everyone wealthy, it's made everyone poor. Third World exploitation mentality is all-pervasive...

It's time for the people who do all of the hard work to finally get paid. That is not socialism, that is economic reality. In this Ponzi economy, the people who work the hardest get paid the least. At the same time they were bilked out of their retirement to pay for tax cuts for the casino class. Without a fair return on labour, and solvent retirement system, the economy will grind to a screeching halt. Working for nothing is known as "slavery", which was supposed to have been abolished some time ago.

The writing is already on the Facebook wall. The wrecking-ball-in-chief is hammering away at the multinational-based global order. Today's pseudo-elite are getting worried.

We ain't seen nothin' yet.

Amid record global wealth inequality, Lagarde claims that breakdown of the global trading system would be:


Quite the contrary, those who organized the 2008 bailout and subsequent wealth transfer are human history's largest cabal of organized criminals.


I just read John Hussman's latest bearish market assessment. In a vacuum of history, his analysis makes perfect sense. He asserts that investment is about "valuation" - You have to buy at the right valuation. Normally, I would agree, however, this analysis is wholly devoid of economic consideration. The key factor that he and other stock market commentators ignore is the zero bound on interest rates which after forty years of Supply-Side failure was reached in this cycle.

That was the biggest clue that the globalized ponzi economy is inherently broken, Supply and debt has supplanted supply and demand. Now featuring zero net return on investment. Hussman blames the Fed. I assure John Hussman that without the Fed this gong show would have ended a long long time ago. But don't take my word for it:

KB: And that's something that you and I would have done if we were running these institutions. Whether or not we agree with expanding fed balance sheets, we'd have to do it...And the interesting thing is it was fed policy was unintentionally distributed to the wealthy

MC: And so, you've got a greater disparity in standards of living, and that's where we are today.

At the zero bound, all of that printed money was used for speculation. Real investment remained at decades lows, because there was no demand. And this policy of inflating asset values "unintentionally" benefited the ultra-wealthy. Which is where we are today.

All of which means that corporate book value (equity) is equivalently over-valued. Corporate asset and corporate debt levels have been inflated in lockstep. In other words, through stock buybacks, the money printed since 2008 landed on corporate balance sheets in the form of a call option on the remaining equity. So contrary to past history, the more asset values deflate, the LESS value they will have, as they approach the point at which bondholders now own the company.

Therefore, on the other side of deflationary collapse, the next "inflation" will be the real one - the one that benefits households at the expense of the financial asset holders.

Today's capitalists don't "believe" in socialism, unless it's for themselves. 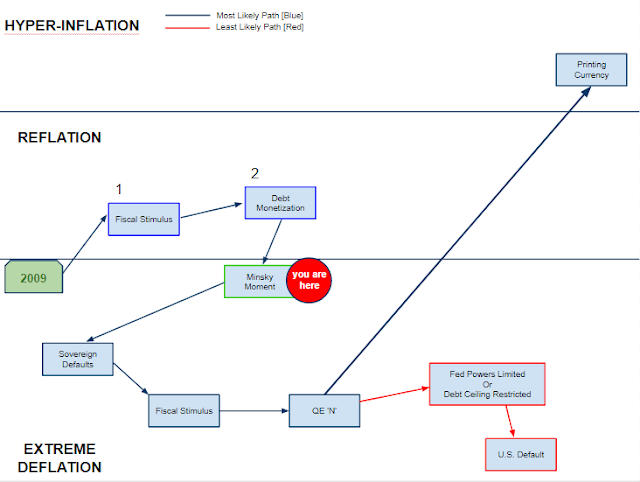