Stocks are "fairly valued" when extrapolating the impossible into the indefinite future
I constantly read pseudo-intellectual Wall Street bullshit telling me that the earnings ratio for this that or the other asset class is x.xx which is x% above or below the "historical norm". I've even posted a few thousand of those stats right here. These pundits have the studied precision of a tea leaf reader handing out lottery numbers. Unfortunately, as we saw in 2008, those types of temporary pseudo-statistics represent nothing more than a set of interdependent asinine assumptions which conveniently extrapolate the impossible into the indefinite future. These half-assed guestimates have the shelf-life of a rotten banana. However, as we know, that won't stop the better part of the Idiocracy from taking advice from their esteemed roller coaster advisers that stocks are still "fairly priced", never mind profit margins being at the highest level in recorded history at the expense of a balanced economy. Yes, this is all just history's largest-ever circle jerk...

The Greatest Greater Fool's Market
What is the true value of a quarter billion dollar London apartment bought with absconded Russian resource wealth at the apex of globalization ?

What is the true value of a million dollar crack shack in Vancouver bought at the apex of globalization following three separate waves of Asian immigration (Hong Kong, Taiwan, Mainland China), in a market that hasn't corrected substantially since 1980?

What is the true value of a U.S. stock market that has been propped up by $4 trillion in Fed money and stock buybacks generated by historically inflated profits. All while the real economy was sold out the backdoor?

What is the true value of a Spanish ponzi bond yielding 2.6% when the unemployment rate is 26%, and the Federal Deficit is -7% ?

What is the true value of a $5 billion dollar market cap IPO with recurring revenue of a pizza parlour ($1m), annual loss of $315m and no final product? (See below for the answer)

These are all only worth what the next greater fool is willing to pay, so when the number of fools with money runs out, look out below.

Intercept Pharmaceuticals (double pump and a half):
A reminder as to what happens to illusory wealth - it ALWAYS ends badly
On the left side is volume by price i.e. "where the bodies are buried": 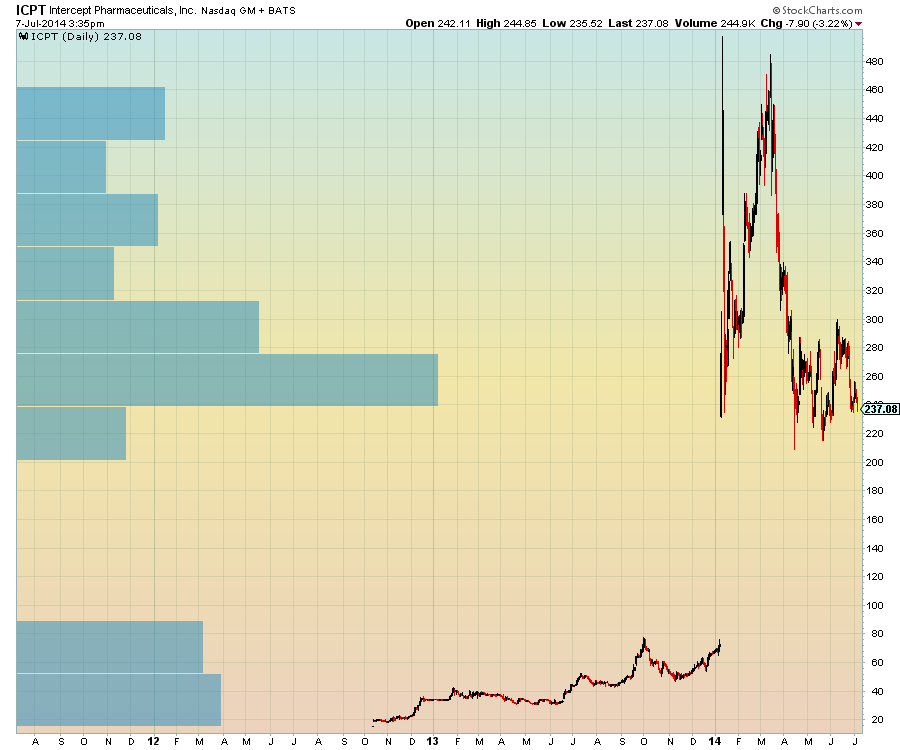