Globalization IS Peak Oil and Global Warming Desecration
[Aug. 16, 2014] "Billions in oil investments at risk from low prices"
"The majors have a potential capital spend of $548 billion (328 billion pounds) over the period 2014-2025 on projects that require a market price of $95/barrel," CTI said, adding that $357 billion of this is earmarked for as yet undeveloped, high-cost ventures. (Cancellation or deferral) is becoming increasingly necessary as near term cash flows are not sufficient to maintain both dividends and capital expenditure plans."
Low Prices = $95 per barrel?  DONE. The remaining oil may as well be on Mars...


Peak Exploration
0% interest rates and $150 trillion in global debt can't afford today's "low" prices
Both supply and demand have been MASSIVELY subsidized under the globalized Third World exploitation paradigm (aka. ponzi scheme). Under $95/bbl, oil reserves will be depleted and not replaced. Demand is already soft and the debt bubble is still at its apex. Once interest rates rise and/or the debt collapses (whichever comes first - likely collapse), the likelihood of ever sustaining prices above the minimum replacement cost of $95 is the limit approaching zero: 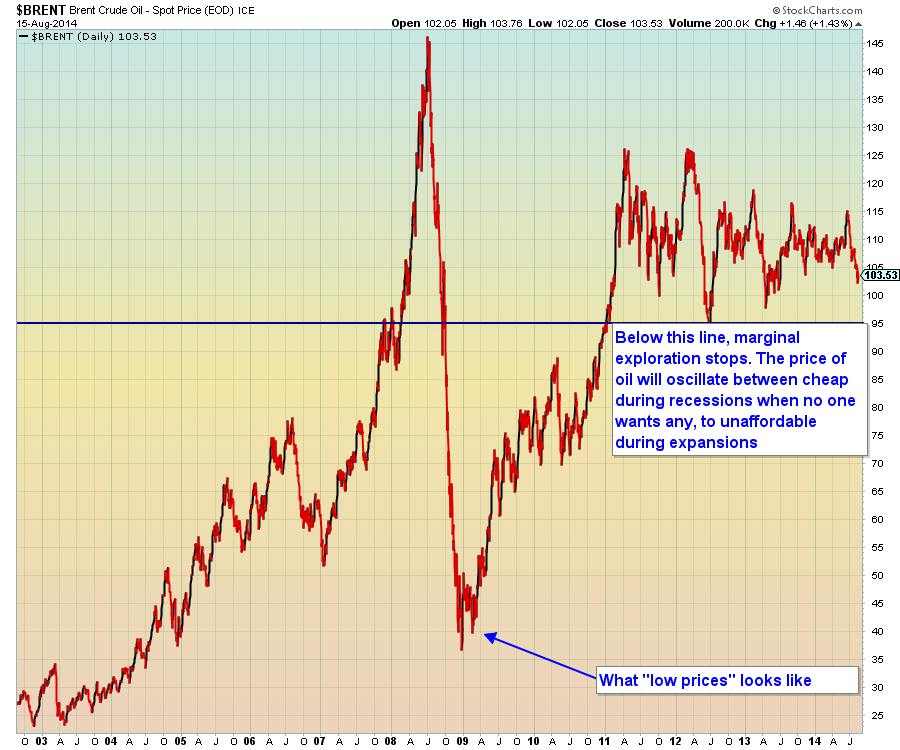 Few if any economists grasp the inherent imbalanced unsustainability of globalization, hence, the overwhelming majority of them will be financially wiped out by their own Ponzi scheme. Most geologists ignore the all-important fact that oil is priced by how much is coming out of the ground versus how much is left in the ground, therefore they will be surprised when their cost models inexplicably go parabolic. Meanwhile, most global warming experts for some reason extrapolate ponzi-style economic growth models into the indefinite future. Personally, I no longer fret about peak oil or global warming, because the collapse of globalization will do more to "fix" those problems than any thousand Kyoto conferences could ever achieve.

Those who don't profess a "belief" in global warming will likewise be monkey-hammered for their unfounded "belief" in Wall Street's ability to manage their money. Facts and reality have a funny way of not giving a damn what people think about them. These dunces were robbed twice by the same casino, yet they still keep throwing money at it, so global warming clearly is the least of their denialistic tendencies. Only an infantile society incapable of facing truth, thinks that facts and reality can be chosen from a fucking menu and then served up with their daily infotainment enema.

Pricing oil based upon how much is coming out of the ground is asinine of course, but that's how it's done. The futures price is arbitraged to the spot price by the cost of storage and prevailing interest rates. Even if the output of oil in the future were to drop off asymmetrically, as Peak Oil predicts, the current price of oil will be substantially influenced by current output. Therefore, the "supply" of oil should really be termed the "output" of oil, because it bears no resemblance to the long-term supply of oil in the ground. All of this means that oil has been systematically underpriced for decades now, because the current price in now way includes a premium for future asymmetric supply reduction.

The amount of oil currently flowing out of the ground is a function of the price that existed several years ago and the subsequent discovery of new oil reserves. Given that oil is a non-renewable resource, then constant investment and oil discovery is required to offset the ever-dwindling reserves. The major variable in this equation is the current and future expected price of oil. A mere fifteen years ago, when oil was ~$12/barrel in 1999, new exploration and discovery was stagnant as one would expect. Therefore, a high and stable price of oil is a critical factor in driving the ongoing high output "supply" of oil.

Way Past Peak Oil
Peak oil theory predicted the cost of oil would rise dramatically, past the peak. As it turns out, it rose 1100% in just 9 years from 1999-2008. That's a staggering 32% annualized rate of growth per year. And as discussed below, it was all subsidized by globalization. Globalization has merely obfuscated the fact that the SUV-oriented lifestyle is no longer sustainable and as we see in the chart below never was scalable across the planet.

Below the price of oil (black line) and Emerging Markets stocks. Which is which? It doesn't matter. The correlation between Emerging Markets as marginal oil consumer is one. Oil had its blow-off spike back in 2008 at the same time as Globalization was peaking in 2008: 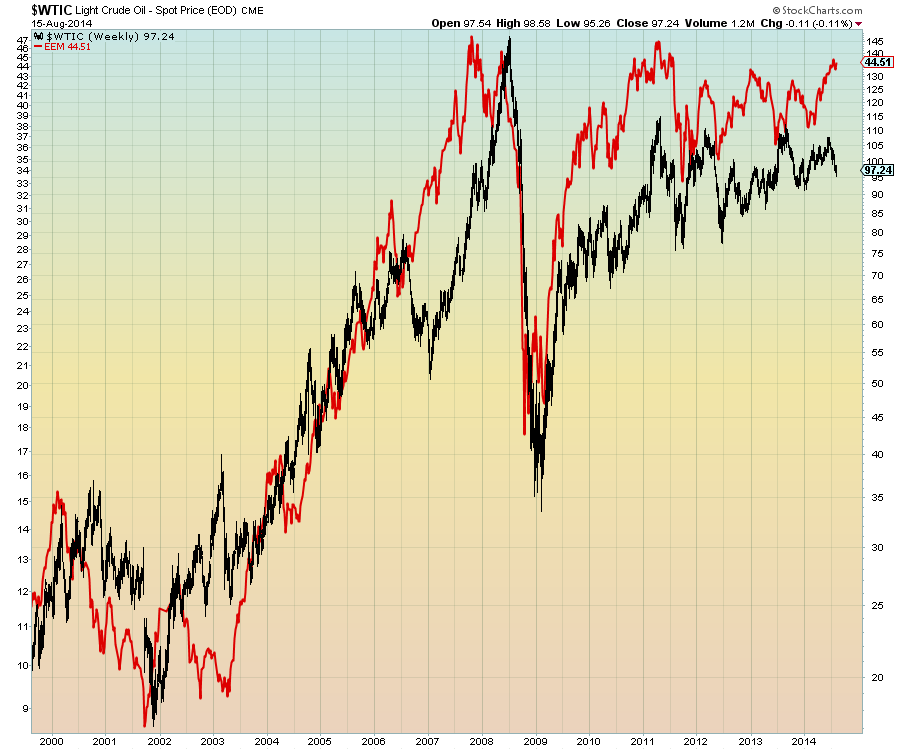 Emerging Markets are the Marginal Consumer of Oil
July, 2014: World Sets New Oil Production and Consumption Records
"Oil demand in the developed countries belonging to the Organisation for Economic Co-operation and Development (OECD) decreased 5.3 percent over the past five years, while demand in non-OECD countries increased 20.3 percent." 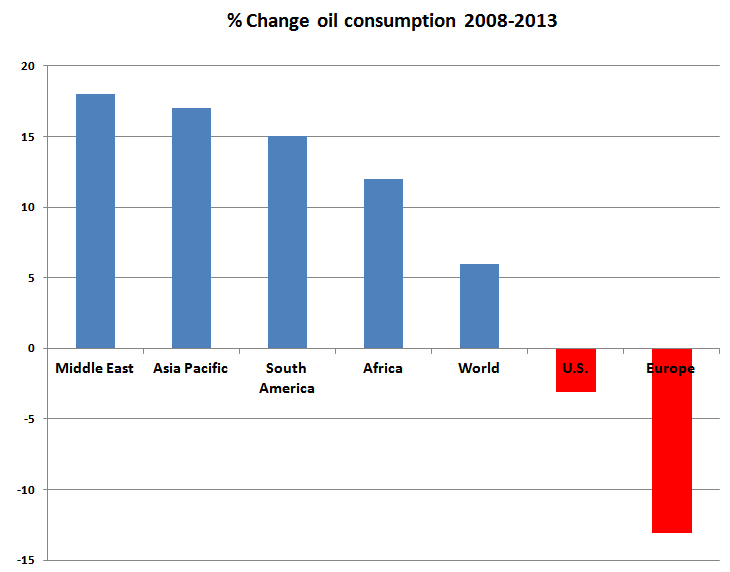 The Fracking Delusion:
May, 2014: The Fracking Boom is Over
"Write-down of two-thirds of US shale oil explodes fracking myth. Industry's over-inflated reserve estimates are unravelling, and with it the 'American dream' of oil independence"

$100/Barrel Oil is an Illusion
Both the demand side and supply side of the oil price are massively subsidized by globalization. Globalization's capital surplus and imported deflation in tandem make 0% interest rates possible and hence subsidize history's cheapest cost of exploration capital without any comparison. Meanwhile, the recurring trade imbalance subsidizes both consumption and fiscal deficits - which in turn pay for the global military presence required to keep the oil flowing. Without all of that in place, the ability to supply and demand $100/barrel oil goes away.

Massively Leveraged
As the price of oil rose steadily for the past 15 years, the viability of ever-more expensive oil extraction sources rose continuously. These higher cost wells and tar sands have massive fixed costs which implies commensurately massive operating leverage. Above the break-even point, these projects are extremely profitable. Below the break-even point, they are extremely bankrupt.

How Much Oil Will ISIS, Al Qaeda, and the Taliban Sell?
I think we all see where this "analysis" is heading. Stability across multiple dimensions is the critical ingredient in ensuring both a high and rising supply (output) of oil and high and rising demand for oil. Those two factors combined in turn contribute to the massively unsustainable level of toxic carbon emissions of ~85 million barrels per day, every day.

Stable demand. Stable oil price. Stable geopolitical order. If all three of those conditions are not met, then carbon output will fall. In the context of a global economic depression, the decline in total emissions will be substantial to say the least. Oversized SUVs driving to the shopping mall or 50 miles away to soccer practice, will be a thing of the past. High fixed costs of production won't mix well with collapsed purchasing power. Most of the current highly priced oil won't clear the market and/or will lead to massively collapsed exploration and hence collapsed future reserves.

No globalization. No cheap capital. No oil. No carbon. No problem.

Bear Flag
Rising wedge consolidation against the primary trend (down) on decreasing volume
Barring WWIII which would trigger the inevitable economic collapse, the next major move is down.. Either way, the uptrend was broken in 2008: 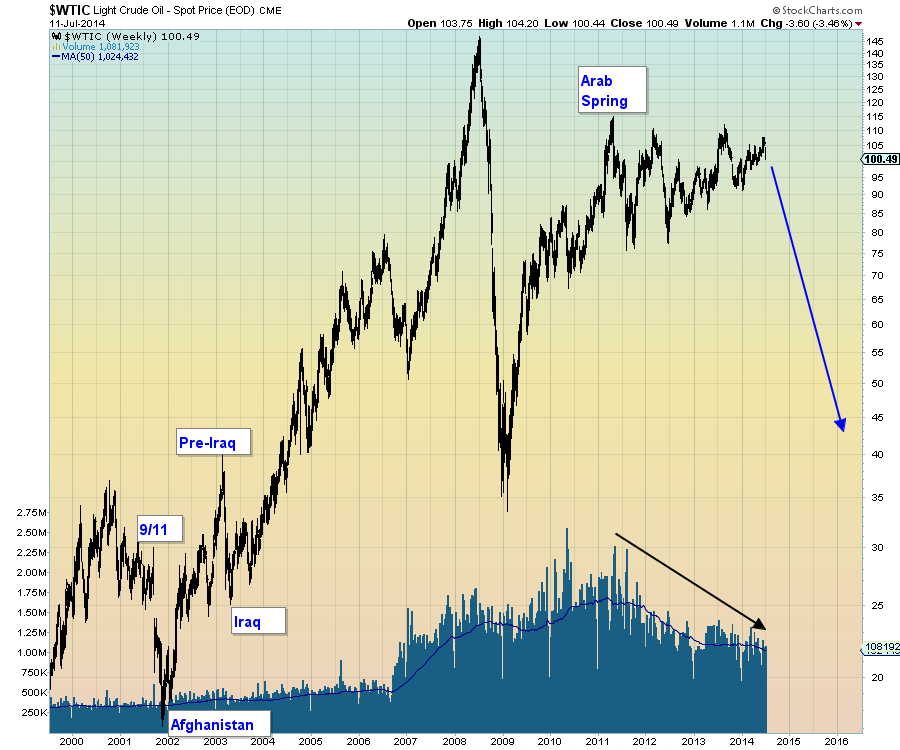