Put A Fork In It: The Collapse in Globalization Is Well Underway

It took five years of Extend and Pretend, but global thought dealers have finally squandered enough financial resources to kill the globalized ponzi model once and for all. An army of Harvard frat boys plus 520 global interest rate cuts combined with $33 trillion of fiscal and monetary stimulus, can't put Humpty Dumpty together again...

Global Trade Has Stalled
Since the end of WWII global trade on average has grown twice as fast as global GDP. Since 2008 however, global trade has grown slower than global GDP i.e. massive deceleration. World trade volume was stagnant through mid-2013. Zero growth in world trade is normally a sign of impending global recession. Economists see this advent of slowing global trade as a disaster because it could put a premature end to shopping mall sprees, inflated billionaire profits and massive environmental degradation (I embellished that last part a bit).
http://blogs.ft.com/gavyndavies/2013/09/29/why-world-trade-growth-has-lost-its-mojo/ 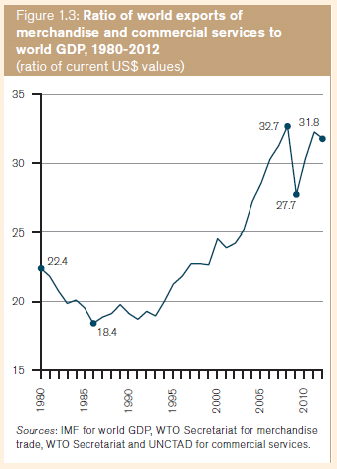 The UN Gets It (Finally): Ponzi Capitalism Is Toast
http://unctad.org/en/pages/PublicationWebflyer.aspx?publicationid=636
"Five years after the onset of the global financial crisis the world economy remains in a state of disarray"
"Prior to the Great Recession, buoyant consumer demand in the developed countries seemed to justify the adoption of an export-oriented growth model by many developing and transition economies. But that expansion was built on unsustainable global demand and financing patterns. Thus, reverting to pre-crisis growth strategies cannot be an option. The Report notes that to adjust to what now appears to be a structural shift of the world economy, fundamental changes in prevailing growth strategies are needed."

You Don't Say
"developed countries must address the fundamental causes of the crisis: rising income inequality, the diminishing economic role of the State, the predominant role of a poorly regulated financial sector and an international system prone to global imbalances; while developing and transition economies that have been overly dependent on exports need to adopt a more balanced growth strategy that gives a greater role to domestic and regional demand."

Too Late
"Distinct from export-led growth, demand-led strategies can be pursued by all countries simultaneously without beggar-thy-neighbour effects."

Capacity Utilization is Falling
The vast majority still believe that interest rates have been falling (Treasury bonds rallying) these past years, due to Central Bank stimulus programs. Therefore, according to conventional wisdom, the Fed's tapering of monetary stimulus MUST cause interest rates to rise:
http://www.marketwatch.com/story/what-to-buy-instead-of-bonds-2014-01-10?link=MW_popular
"The search for bond alternatives is urgent. Interest rates almost certainly will rise this year as the Federal Reserve continues scaling back its massive stimulus program — and bond prices fall as interest rates rise"

Unfortunately, even a one-eyed man looking sideways can see below that interest rates (red) fall EVERY time the Fed ends one of its quantitative easing programs. The economy is in a state of deep underlying deflation. Therefore every time the Fed takes its foot off the gas, deflation accelerates and risk assets sell off aka. stocks and interest rates fall. 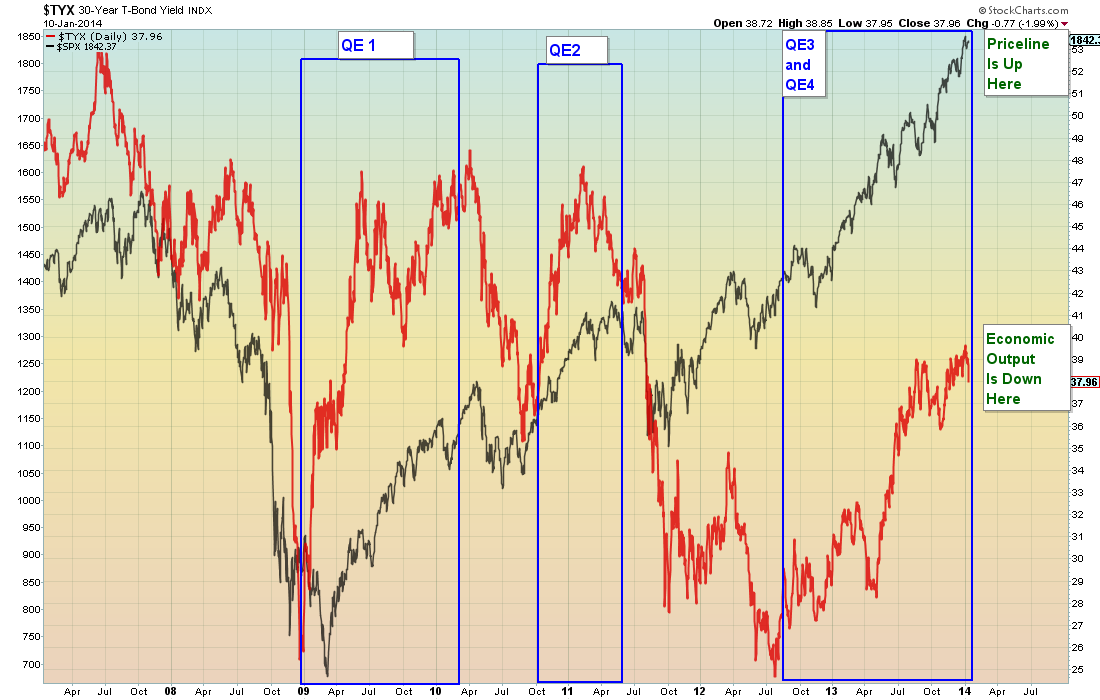 Globalization is Generating The Mother of All Output Gaps
The longer-term view of interest rates (below) is the scariest chart on the internet. The implications of this chart have even me wanting to change my underwear. Despite trillions in monetary inflation, forward inflation expectations are still falling. The bond market has already determined that deflation is inevitable. Central Banks can't save globalization from cannibalizing the world economy and leaving nothing in its wake except massively expanded supply capacity and collapsed demand i.e. the mother of all output gaps.

The Mystery of the Missing Jobs
Therefore, the real reason there are no jobs is simply because there is too much global spare capacity and under the fundamentally imbalanced globalization paradigm, the output gap just keeps growing.

Long-term interest rates over the past 20 years:
The trend in interest rates is still down even though the money supply and economy are still expanding. Totally unbelievable. Wait until that black line (S&PCasino) collapses; as we see in 2008, interest rates went straight down with the stock market. This time nominal interest rates will go firmly negative, even if real (deflation-adjusted) rates remain positive: 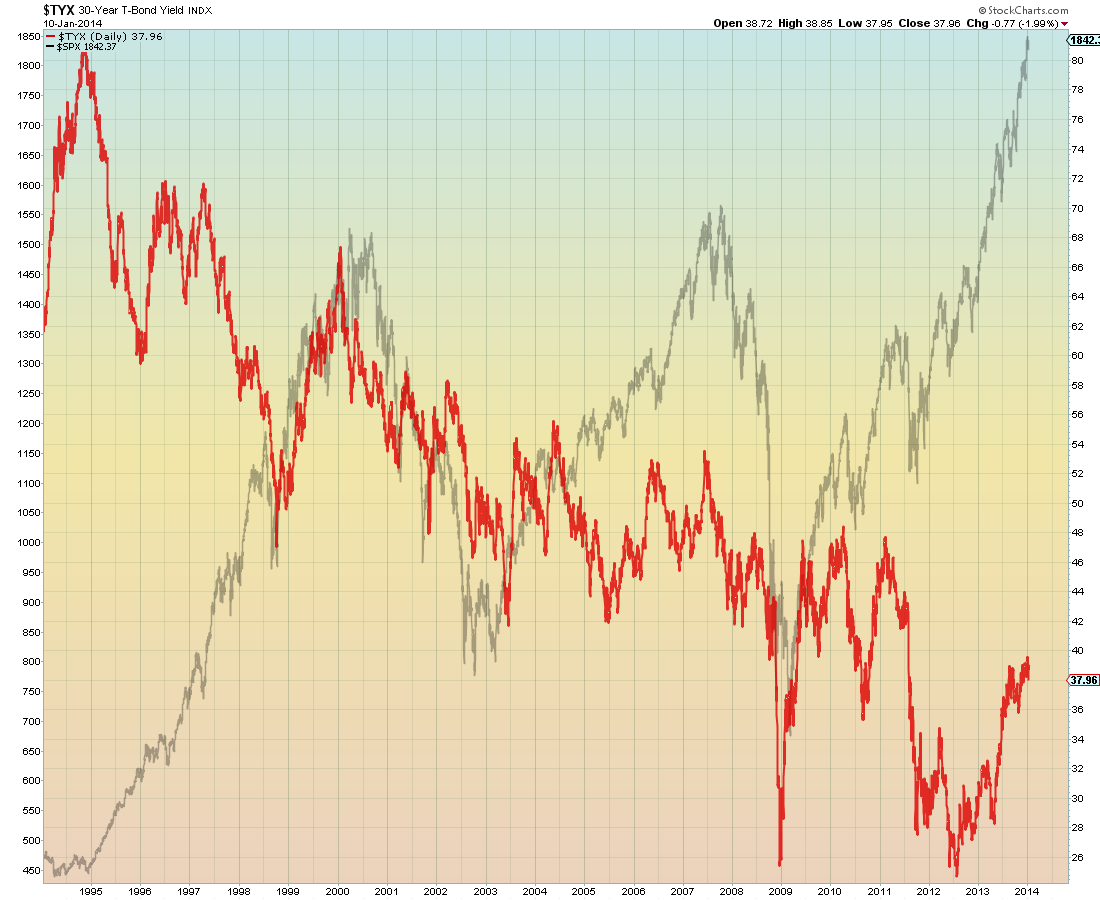 Game Over, Man
The Fed did its best (below) to save globalization from self-imploding, but they can't save something that is totally imbalanced and unsustainable from collapsing. With respect to jobs and debt-adjusted GDP, The underlying economic collapse is already well advanced despite what the public at large has been led to believe. 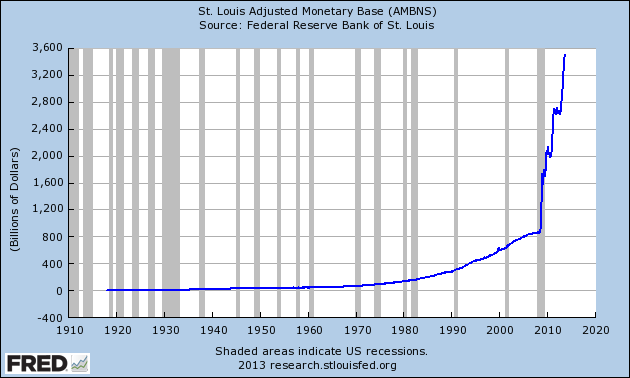 Globalization is a Poverty Generation Machine
Low interest rates are only confirming what the jobs market is clearly saying about spare capacity.
The Labor Force Participation Rate - now at a fresh 35 year low - is the best indication that the globalized pseudo-economy is throwing off massive amounts of spare capacity aka. people. It was either this, or lower profits, so DowCasino took priority. If labor participation is already collapsing now, what does that portend when this current artificial "business cycle" ends, given that it's already long in the tooth:
"This cycle is now the seventh-longest of the 34 cycles since 1854" 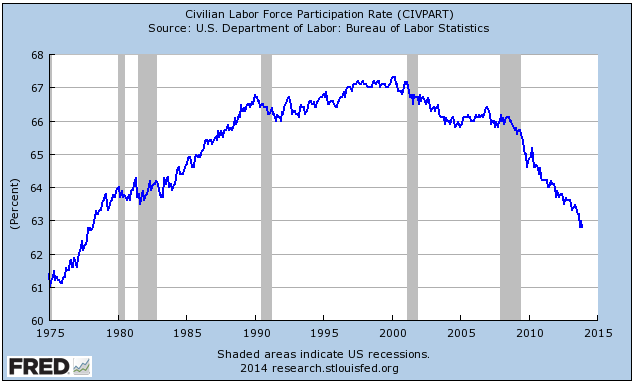 Obamanation
Using 2008 as a baseline for GDP and the deficit, then we see that debt-adjusted incremental GDP is firmly negative. This implies a Keynesian/Fiscal economic multiplier of less than 1 i.e. a negative ROI for each dollar of debt. Conventional demand (and supply) side economic theory is irretrievably broken. We are in uncharted territory on a rudderless ship.

The illusion-formerly-known-as-the-economy is 120% borrowed money. We can thank the grandchildren for giving up their future so that today's shrink-wrapped zombies could have a few more years of shopping sprees.

This cumulative imbalance will only increase when the stock market falls and capital gains taxes dry up, just as what happened in 1999 when Clinton ran a surplus and economists tripped over themselves to declare the end of deficits. That dunced fantasy lasted all of a few months... 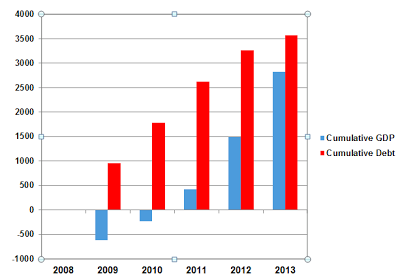 China "Won" the Globalized Trade War - A Totally Pyrrhic (Empty) Victory
Over two decades ago, the Chinese Communist Party set out to create the leading capitalist economy on the planet. You can't make this shit up. Fast forward and they have now surpassed the U.S. in global trade as of just this week.
It was text book export mercantilism aka. "Beggar Thy Neighbour" policy. China ran the long game against America's political attention deficit retards. No different than how England amassed Spain's gold back in the 1600s:
The Balance of our Forraign Trade is The Rule of Our Treasure
"We must always take heed that we buy no more from strangers than we sell them, for so should we impoverish ourselves and enrich them."

America is Run by Political Morons
Apparently people four hundred years ago were not this stupid... 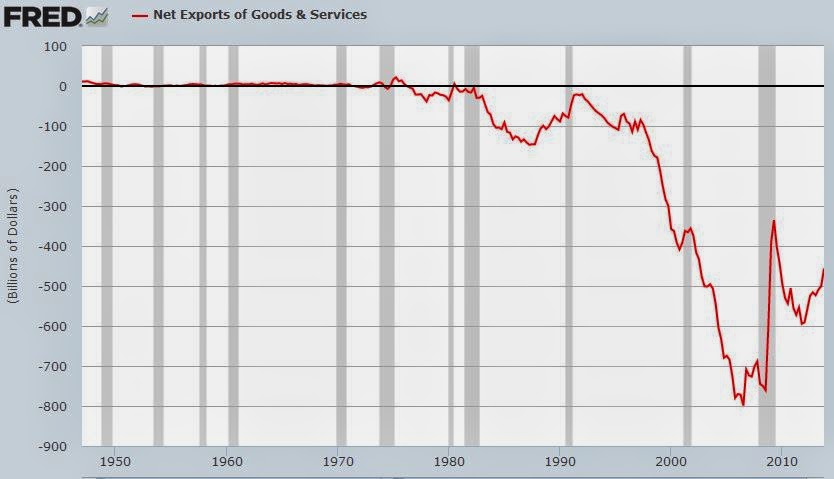 In any event, China is now Communist in name only and have thereby become the world's largest Fascist state followed by the U.S. and Russia both of which are puppet democracies owned by and for ultra wealthy oligarchs. China's *reward* for this metamorphosis is a society populated by millions of factory wage slaves making $.80/hour minimum wage, unsustainably polluted cities, trillions of non-amortizing unsecured foreign (Ponzi) debt and what will ultimately prove to be thousands of idled factories closely followed by widespread discontent.

Congratulations. You finally made it.