The Last Emperor. Has No Clothes.

I just watched a sordid documentary about Trump's kingmaker, Roger Stone, proving that all it takes for democracy to fail is widespread nihilism, cynicism, and ignorance. The demagogue figures out what the mob wants to hear and works backwards to the podium...

Movie reviewer on Get Me Roger Stone:
"How the Republican Party made itself over from an organization of gentlemen to a slash and burn cult "
- Owen Gleiberman 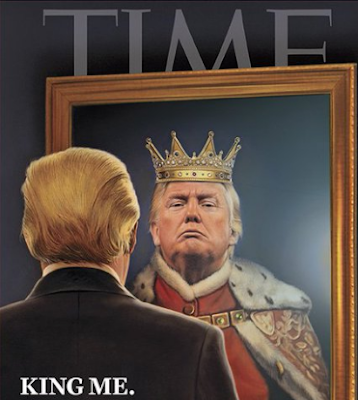 I will start by saying that relative to post-WWII subject matter, this is likely the most sordid documentary I've ever watched. Something this cynical would not have been possible in a prior period. While intending to profile Trump's controversial kingmaker Roger Stone, the film inadvertently documents the process by which the Republican party descended into depravity by becoming the party of hate, war, and unbounded greed. Cloaked in the artifice of Christian family values.

Interestingly, I used to be extremely conservative, especially on economic issues. I had been brainwashed by business school. Over time however, as I compared economic reality to the textbook fantasy I had been taught, I eventually came to realize that modern conservatism is merely Ayn Randian fiction: The inversion of morality from altruism to self-interest leading to an imbalanced cycle of greed and collapse which will terminate in anarchy. Those who never grow out of this zero sum Lord of the Flies mentality are the ones who never really grow up. Enter Trump, who exhibits the behavior and literacy of a petulant child. The hand-picked sock puppet of Roger Stone.

The film itself is an indictment of the Republican party as cynically told by Republicans themselves. There is unabashed enthusiasm for corruption and malfeasance throughout the entire film. It's a cautionary tale and testament to the unseen moral slide that attends the collapse of all once great nations. It's abundantly clear that the people in the film are wholly self-unaware that what they are de facto describing is the latter stages of a nation in moral death spiral. An economically-stunted political class evincing 100% faith in their Voodoo Economics to recursively restore their bubble, while treating the middle class like their personal ATM machine. Zero understanding or concern for the finite limits of an ever-less mentally stable society that they themselves openly exploit for political advantage.

The story begins with the rise of Roger Stone from the ashes of the Nixon debacle. The failure of the Nixon presidency forced the Republican Party to adopt brutally vicious campaign methods to regain power. A makeover led by a man having a cult-like obsession with Nixon. Going so far as to have a tattoo of him on his back. A man who openly embraces Machiavellian evil in every form.

Along the way, Stone and his allies invented the unlimited funding vehicle "Political Action Committees" (PACs) to circumvent campaign funding laws. They took attack ads and character assassination to a level of viciousness never seen before. They turned insider-based political lobbying into a large scale industry. They used racism and sexism as a political weapon to incite polarizing divisiveness and gain votes. Some would say I'm naive to believe that Democrats haven't themselves co-opted many of these same tactics. Of course they have. However, the willingness to continually debase the moral status quo and "do whatever it takes" to gain power is the signature of the party that believes maximizing profit is a post-moral imperative. As taught in every business school.

For forty years, the signature Republican access path to power has been to fan and exploit the anger of the intentionally uninformed working class, inciting them to vote against their own interest. Each successive cycle of reflation and collapse leading to more anger to be exploited for the next round of political and economic gain.

We all know the downstream outcomes. First off, *Free Trade* gutted the U.S. economy to the benefit of multinational profit. In addition, they turned war into an economic stimulus program. They systematically eliminated healthcare for the working poor. They raided Social Security and Medicare to fund tax cuts. Only in the U.S. would a deduction from one's pay check be called an "entitlement" and then re-directed into someone else's pocket. In any other developed nation that would be called theft. Which means that historically speaking the plundering of Social Security and Medicare are the largest thefts in human history, carried out by de facto criminals.

All of this malfeasance of course culminated in yet another recursive round of fake "MAGA" by recycling Trump into his greatest reality TV role yet. Led by the man who took D.C. swamp politics to a level never seen before. In other words, once again, the inherently illiterate Trump base installed the fox into the hen house. The invisible "deep state" was subsequently blamed for all of the ensuing corruption, in order to defray any semblance of conscience.

It's all a cautionary tale. All that is needed to subvert democracy is widely embraced nihilism, cynicism, and ignorance. America's fake Christians made a pact with the Devil. The down payment was made, the balance is due.