You can't make this shit up...

The U.S. full year projected growth rate has been revised down continually since January and now stands at 1.5%. It goes down almost every day, so these numbers will be wrong by tomorrow. However, just now the U.S. deficit was revised up to half a trillion (3% of GDP), because of course any time the economy slows that implies lower tax revenues. So in any honest world, the U.S. would be deemed to be in a recession and using Keynesian fiscal stimulus to avoid economic contraction, however instead, the 1.5% is referred to as GDP "growth". As I've said all along, at that rate, why not just borrow 6% and have a real economy?


"I will turn your face to alabaster, when you find your servant is your master"
A $500b deficit equates to 12% of the total U.S. government budget and 80% of the U.S. defense budget, which is significantly funded via the China trade deficit of $300b, per the Capital Account = Current Account axiom. Other countries throughout history have attempted to borrow from potential geopolitical adversaries, and it never seems to work.

Econo-dunces have redefined the term "recovery" to equate to how much money can be plundered from the grandchildren to indefinitely sustain the inherently unsustainable: 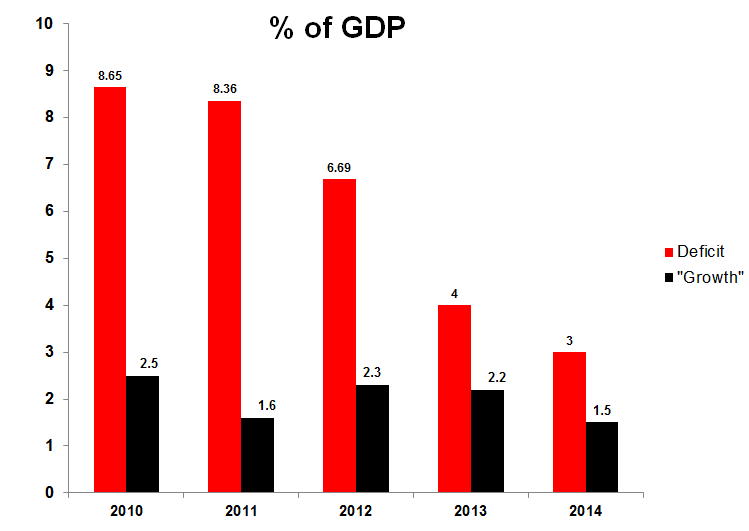 Deficit as % of GDP from FRED
Annual real GDP % change from FRED
Song lyric above from The Police
Posted by Mac10 at 10:01 AM