"Has monetary policy aided and abetted risk-taking? I hope so. That's why we did it"
Bank of England chief economist Andy Haldane. [July 13, 2014]


"We are beginning to discover that the reason the world recovery is so slow is that monetary policy isn't the answer now, and other policies need to be put in place to rebalance the world economy,"
- Mervyn King, Former Governor, Bank of England [Aug. 11, 2014]

- Bank for International Settlements, July 2013
"The "borrowed time" central banks have created with ultra-low interest rates following the collapse of Lehman Brothers in 2008 has not been well used".
"Continued low interest rates and unconventional policies have made it easy for the private sector to postpone deleveraging, easy for governments to finance deficits, and easy for the authorities to delay needed reforms in the real economy and in the financial system."

BIS chief fears fresh Lehman from worldwide debt surge [July 13, 2014]
"The world economy is just as vulnerable to a financial crisis as it was in 2007, with the added danger that debt ratios are now far higher and emerging markets have been drawn into the fire as well, the Bank for International Settlements has warned."

Greenspan says bubbles can’t be stopped without ‘crunch’ [July 27, 2014]
MarketWatch: "What is the biggest challenge facing the Fed?"

Greenspan:
"How to unwind the huge increase in the size of its balance sheet with minimal impact. It is not going to be easy, and it is not obvious exactly how to do it."

How not to do it: Greenspan's Bubble in One Chart
Interest rates blue line
Housing prices red line 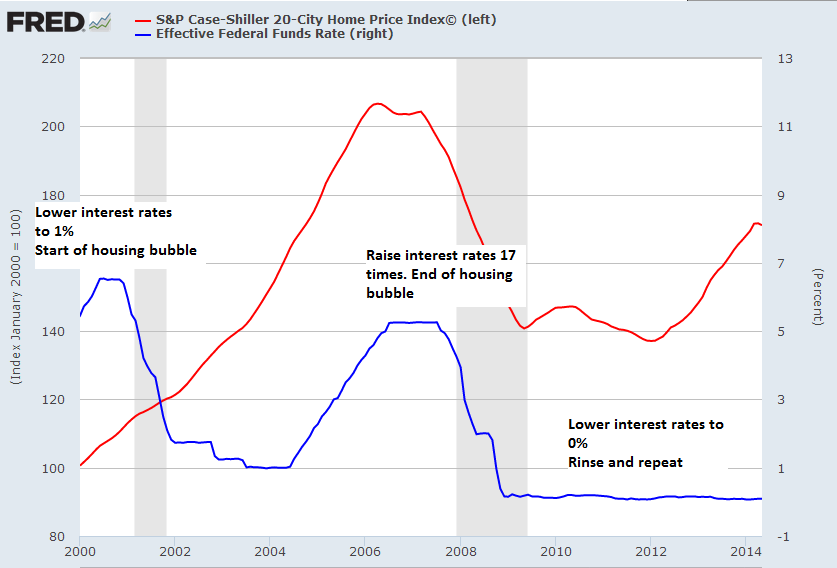 FINANCIAL DEATHSTAR 2.0:
Guaranteed to obliterate Globalization, or your money back
Let me get this straight, the Global Financial Crisis was a massive debt bubble that ended with extreme dislocation, but now six years later with debt 40% higher, there is no bubble?
Data from: http://www.bis.org/statistics/ar2014stats.htm 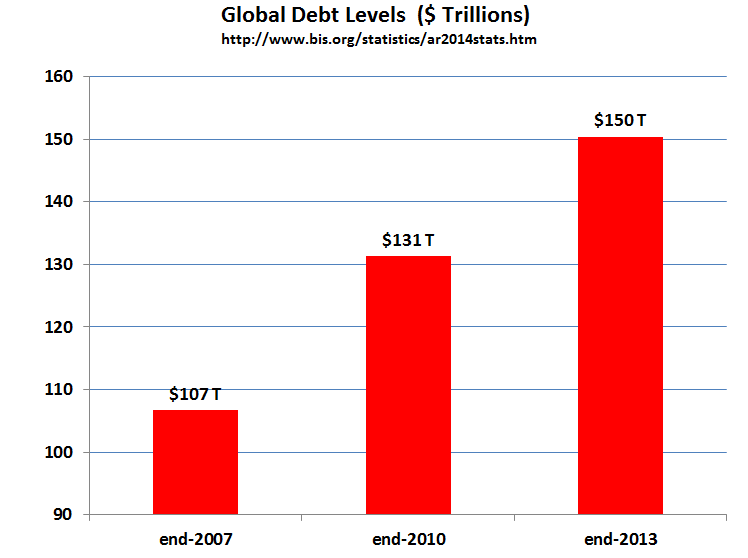 There is a peak limit as to how many dumbfucks can be sustained on this planet. We're currently six standard deviations past that level.

Even the buffoons are getting worried. 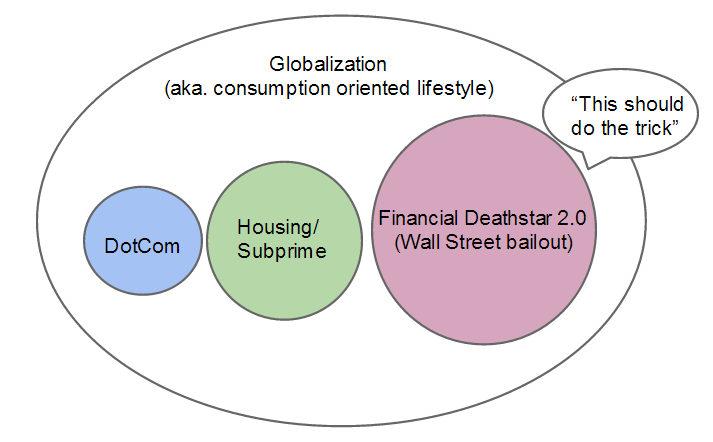